Trump’s latest morning of tweets was off the rails, even by his standards 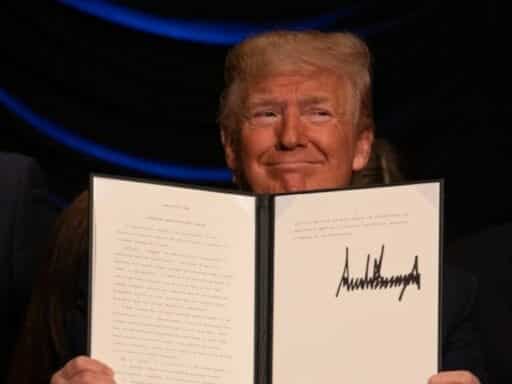 Insults, lies, gaslighting, authoritarian threats — all before the coffee even hit.

Two and a half years into the Donald Trump presidency, Americans are used to Trump posting off-the-rails tweets. But Thursday morning still stood out.

Trump body-shamed Sen. Elizabeth Warren while using a slur to demean her, mistakenly tagged a random retired teacher who is not of fan of his while insulting her fellow 2020 contender Pete Buttigieg, expressed confusion about when his presidential campaign began, joked about illegally staying in power beyond a second term, brazenly gaslighted about his indebtedness to banks, and said he thinks he’ll win in Minnesota in 2020 simply because a city council there decided to stop saying the Pledge of Allegiance before meetings.

All of this happened before 8 am.

Each of these tweets, by themselves, would’ve been highly abnormal public statements coming from any other president. For Trump, they are not. Still, the volume with which he posted them on Thursday morning was remarkable.

Here’s a breakdown of Trump’s odd tweets on Thursday, in the order in which he posted them.

Trump is confused about when his campaign began

While hyping the sham social media summit that’s set to take place at the White House on Thursday, Trump tried to take shots at “The Fake News,” which he claimed has “lost tremendous credibility since that day in November, 2016, that I came down the escalator with the person who was to become your future First Lady.”

(Trump deleted and reposted a number of tweets that originally contained errors, including this one, but not before I captured screengrabs of the original tweets.)

There’s just one problem: The escalator incident Trump referred to actually happened happened in Trump Tower 17 months before November 2016, in June 2015, just before the speech in which he launched his presidential campaign. While Trump’s election night victory speech also took place in Trump Tower, there was no footage of him coming down an escalator on that night. He appears to have mixed it up.

Remembering when your presidential campaign began seems like a pretty odd thing to get confused about. But Trump was just getting started.

Trump “jokes” about staying in office for for 14 more years

Trump segued from a tweet expressing confusion about when his campaign began to one in which he joked about staying in office for as many as 14 more years.

This is far from the first time Trump has indicated that he’s interested in staying in office for more than two terms. He’s said he does so to troll the media, but given his open admiration for dictators abroad and repeated efforts to undermine the rule of law at home, his jokes about becoming president for life really aren’t funny.

In the same tweet in which he joked about illegally extending his term in office, Trump, while trying to demean South Bend, Indiana, Mayor Pete Buttigieg for purportedly resembling cartoon character Alfred E. Neuman, mistakenly tagged an account belonging to a retired teacher who, based on his recent retweets, is clearly is not a fan of the president.

Trump mistakenly tagged a random retired teacher who hates him. This is the guy who has the nuke codes. pic.twitter.com/YDSjMxSSSe

This isn’t the first time Trump has mistakenly tagged the wrong account on Twitter — he did so as recently as two weeks ago. But that he continues to make easily avoidable mistakes like this is a sign of how little vetting his tweets get before they’re posted for the world to see, as well as a broader recklessness.

After insulting Buttigieg, Trump demeaned Elizabeth Warren by describing her as “a very nervous and skinny version of Pocahontas.”

“Pocahontas” has become Trump’s go-to slur while mocking Warren and her ill-fated attempt to claim Native American ancestry. But attacking Warren’s demeanor and looks is a new twist, and comes while first lady Melania Trump is purportedly busying herself with anti-cyberbullying work as part of her broader “Be Best” campaign.

Trump went on to compare Warren unfavorably with himself, describing himself as “so great looking and smart, a true Stable Genius!” But note that in that very same tweet, Trump revealed a confusion about fractions. According to an analysis of the results of the DNA test Warren released, her fractional Native American ancestry is somewhere between 1/64 and 1/1024. But in writing “1000/24th,” Trump got it backward.

Trump then turned his attention to Minnesota, where the city council in the Minneapolis suburb of St. Louis Park recently voted to stop saying the Pledge of Allegiance before meetings. The story has been a major topic this week on Trump’s favorite television show, Fox & Friends.

The latest polling indicates that Trump’s approval rating is 16 points underwater in Minnesota, but Trump seems to think that the St. Louis Park City Council’s move will be enough for him to overcome that deficit and win a state that hasn’t gone for a Republican since Richard Nixon in 1972.

The Pledge of Allegiance to our great Country, in St. Louis Park, Minnesota, is under siege. That is why I am going to win the Great State of Minnesota in the 2020 Election. People are sick and tired of this stupidity and disloyalty to our wonderful USA!

Trump’s tweet suggests that instead of using his power to do things that make people’s lives better, he thinks a winning strategy heading into 2020 is identity grievance issues. The polling in Minnesota begs to differ, but then again, Trump doesn’t buy polls that aren’t favorable to him.

Trump gaslights about his indebtedness to banks

Hours after the New York Times published a report about the business relationship between Deutsche Bank and Jeffrey Epstein, a convicted sex offender with ties to Bill Clinton and Trump, the president proclaimed that he doesn’t need to do business with banks because “I didn’t (don’t) need their money (old fashioned, isn’t it?).” He went on to acknowledge but downplay his dealings with Deutsche Bank.

….And remember, a bank that I did use years ago, the now badly written about and maligned Deutsche Bank, was then one of the largest and most prestigious banks in the world! They wanted my business, and so did many others!

This is brazen gaslighting. In March, the New York Times reported that Trump took out an astounding $2 billion in loans from Deutsche Bank and was cut off on two separate occasions by the bank because executives realized he was a risky client. That reporting came a little less than a year after news that Trump still owed as much as $480 million to a number of banks and financial services firms, including but not limited to Deutsche Bank.

And, of course, while Trump tries to brag about his business acumen, it’s worth remembering the Times’s bombshell reporting from last October about how he was gifted at least $413 million by his father, then participated in “dubious tax schemes during the 1990s, including instances of outright fraud” to increase that fortune.

Some of Trump’s most bizarre mornings of tweeting have come amid bad news cycles for him or when bad news is on the horizon; for instance, as I detailed at the time, Trump posted a string of increasingly bizarre tweets shortly after the Mueller report was released publicly in April. But these Thursday tweets come as his approval rating hits historic highs — he’s still 9 points underwater but, according to a new Washington Post/ABC poll, at the highest point of his presidency — and with no obvious reason for him to be melting down. Perhaps there is less method to the mayhem than there sometimes seems.