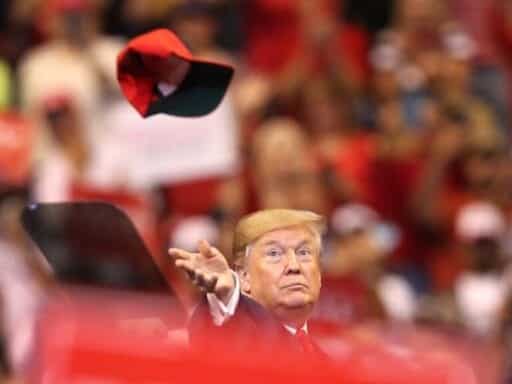 Share
Loading...
President Donald Trump tosses a hat into the crowd at a rally in Sunrise, Florida in November 2019. | Photo by Joe Raedle/Getty Images

After claiming victory over the war on Christmas, the president has now moved on to the … war on Thanksgiving.

Before we inevitably arrive at the alleged war on Christmas this holiday season, we’ve first got to tackle the … war on Thanksgiving? Which is supposedly a thing now, too. At least according to President Donald Trump.

Conservative media and some Republicans have for years claimed that Christmas is under attack, turning some people’s decision to say “Happy Holidays” instead of “Merry Christmas” during the month of December into a culture war touchstone to try to spark outrage on the right. Trump has embraced the “war on Christmas” narrative, and now he’s taking it a step further: he’s claiming liberals are out to get Thanksgiving, too.

It’s not clear who on the left Trump believes is trying to change the name of Thanksgiving, which is a secular American holiday. It’s true there is some cultural strife surrounding the day, including its historical weight for Native Americans and its environmental impact, but there’s not some broad push to change the name of the holiday altogether.

Trump’s remarks quickly took off online, with the hashtags #WarOnThanksgiving and #WhatLiberalsCallThanksgiving trending on Twitter, largely ironically. Some conservatives, on the other hand, have tried to find ways to back up the president’s claims.

#WarOnThanksgiving It was only a matter of time before they fought back pic.twitter.com/CrKHH1aVlD

The president has leaned into culture wars often throughout his tenure, aware that it’s a way to rally his base and sow division. Declaring out of the blue that there’s a movement on the left to change the name of Thanksgiving is another example of that. But the episode also highlights the president’s dismissiveness of issues with some real cultural and social weight. While Thanksgiving’s name isn’t particularly controversial, its history is.

While there isn’t a war on Thanksgiving, that didn’t stop Fox News from exploring what the president could have meant. On Fox and Friends Wednesday morning, the hosts noted that there was once a false rumor that President Barack Obama wanted to change Thanksgiving’s name years ago (they even acknowledged on-air that it wasn’t true) and mentioned that some environmentally-conscious people have expressed concerns about Thanksgiving’s carbon footprint. They emphasized the “tradition” of the holiday’s name and its expression of gratitude.

Fox & Friends lends credence to Trump’s bizarre lie that people are trying to change the name of Thanksgiving: “I think the issue that a lot of people have with potentially changing that name is the fact that in that name we’re expressing gratitude.” pic.twitter.com/MXzmNdp39i

It makes sense that Fox News would go along with Trump’s Thanksgiving claims a little bit, given the role the network has played for years in pushing the narrative of the war on Christmas.

As Liam Stack explained in the New York Times in 2016, the modern idea of the attack on Christmas stems from Fox News’s promotion of a 2005 book by radio host John Gibson that “alleged liberal antagonism toward the holiday.” Since-ousted Fox News host Bill O’Reilly leaned into the concept, it took off from there. Every year, the outlet complains that phrases such as “Happy Holidays,” or the attempts of secular spaces such as schools to make the holiday season more inclusive, amount to an assault on one of the Christian religion’s biggest holidays of the year. Even the Starbucks holiday cup has become a point of contention.

Trump, who often tries to appeal to the Christian right for political support and knows a good cultural controversy when he sees one, has taken the war on Christmas and run with it. Since he first ran for president, he’s been promising to reject the so-called “war on Christmas” and invoked it as another way to rally his supporters against the perceived overreach of political correctness in the United States. And, staying true to form, he’s claimed victory, repeatedly telling voters that we’re finally saying “Merry Christmas” again.

He did the same thing on Tuesday when he brought up Thanksgiving. “Now everybody’s using Christmas again. Remember this?” he said.

It’s not a bad idea to give Thanksgiving a think

For all you Thanksgiving aficionados out there, nobody’s coming to take away your turkey, your stuffing, or your cranberry sauce. (Side note: Have you seen Vox’s definitive ranking of Thanksgiving sides?) But that doesn’t mean it’s not worth considering that the holiday isn’t the same for everyone and for all communities.

For Native Americans, the holiday can be a painful one, not a time to celebrate but instead a time to remember the atrocities they suffered when Europeans landed in America, and to note that the story in many history books about the Pilgrims and Native Americans is not an accurate one.

Since 1970, some Native Americans have instead been observing the National Day of Mourning, a protest and remembrance of “the genocide of millions of Native people, the theft of Native lands, and the relentless assault on Native culture.” They gather in Plymouth, Massachusetts, on Thanksgiving each year.

”We go there every year, along with many nonindigenous allies, as well, to talk about the truth about Thanksgiving,” Mahtowin Munro, co-leader of the United American Indians of New England, which organizes the protest, told CNN.

It’s not clear whether this protest is what Trump was referencing, but if it was, it’s hardly a leftist effort to rename a holiday — rather, it’s an effort to highlight the country’s history from an underrepresented perspective.

Some environmental groups have also pushed for more conversation about the environmental impact of Thanksgiving, including the food consumed (and wasted) and travel. Again, not bad to think about, but also not an attack on Thanksgiving.

Will Trump’s claims of a war on Thanksgivings have legs? It’s hard to tell, but given the Christmas season basically starts now, he, Fox News, and the rest of the culture war-stoking conservative media are likely to turn to Christmas instead. At least we now have the tweets and memes.

Burn this mother fucker down. pic.twitter.com/pfEHEae9mt

I’m just like the rest of America, I put my guacamole on the tofurkey one spoonful at a time #WhatLiberalsCallThanksgiving

When you see there’s people who think there’s a #WarOnThanksgiving pic.twitter.com/Yx6JH9a136

I must’ve missed the part where we called Thanksgiving something else. I hope trump enlightens us soon on what us liberals call it now so I can be sure to say the right thing on Thursday. #WhatLiberalsCallThanksgiving

House Freedom Caucus founder and Trump ally Mark Meadows is retiring from Congress
Trump already wants a recount in Wisconsin, but his odds of winning it are very small
This sourdough recipe takes all day. That’s what makes it great.
Vox Sentences: Another Russian hack
Pipe bomb suspect arrested: what we know
Donald Trump paints the border as a lawless hellhole. But so does American pop culture.