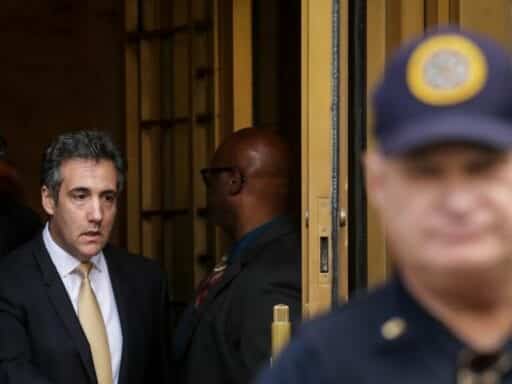 Trump turns on his former lawyer Michael Cohen and paints his former campaign chair Paul Manafort as a martyr.

President Donald Trump was uncharacteristically quiet about the legal troubles of his former associates on Tuesday, but he broke his silence Wednesday morning by offering some rather valuable legal advice:

If anyone is looking for a good lawyer, I would strongly suggest that you don’t retain the services of Michael Cohen!

It’s always nice when you can laugh about your former attorney implicating you in federal crimes.

And Cohen’s admission in court that he made that Daniels hush money payment to “influence the election,” and that he did so “in coordination with and at the direction of” Trump, strongly implicates the president of the United States.

Trump’s first instinct seemed to be … humor. But that didn’t last long.

So although Trump started off the morning joking about Cohen’s less-than-stellar legal services, he quickly turned to Manafort, portraying him as a persecuted martyr and Cohen as a lying snitch:

I feel very badly for Paul Manafort and his wonderful family. “Justice” took a 12 year old tax case, among other things, applied tremendous pressure on him and, unlike Michael Cohen, he refused to “break” – make up stories in order to get a “deal.” Such respect for a brave man!

Trump refers to the crimes of “brave man” Manafort as a “12 year old tax case,” though the oldest charge refers to 2010 to 2014 (false income tax return), and the most recent bank fraud charge deals with the time period from 2015 to January 2017.

Trump also tried to claim that because “a large number of counts” couldn’t be decided in Manafort’s case, it must be a witch hunt.

A large number of counts, ten, could not even be decided in the Paul Manafort case. Witch Hunt!

And Manafort still faces another, separate trial in September, in Washington, DC, on seven additional charges.

So, in other words, despite Trump’s best efforts to portray him as such, Manafort is far from an innocent man who was railroaded here.

Then it got even weirder.

Though Trump had just argued in a tweet not 15 minutes prior that Cohen chose to “make up stories in order to get a ‘deal,’” he proceeded to argue that the crimes Cohen pleaded guilty to aren’t actually crimes anyway:

Trump’s aside about Obama seems to be in reference to a $375,000 fine Obama’s 2008 presidential campaign was forced to pay to the Federal Election Commission in 2013 for “campaign reporting violations.”

It was a record fine, to be sure — Politico reported at the time that it was “one of the largest fees ever levied against a presidential campaign.” But as Rick Hasen, an election law expert at the University of California, Irvine, told Vox’s Dylan Scott Wednesday, there’s a big difference between criminal convictions like Cohen’s and civil violations like Obama’s, and “inadvertent violations like Obama’s are punished civilly by the FEC.” (It should be noted that Trump himself got dinged by the FEC, too.)

Trump’s distorted attacks on Cohen are an attempt to distract from the seriousness of the allegations his one-time fixer laid out against Trump. But it’s not easy to spin the guilty plea and felony conviction of former associates.

Pete Buttigieg claims victory in Iowa before the results are in
New evidence suggests Trump’s border crackdown isn’t just cruel — it’s likely ineffective
6 winners and 6 losers from Game of Thrones’ biggest battle yet
Trump will reportedly ask Congress for another $8.6 billion to build the wall
The primary elections for the open Wyoming governor’s seat, briefly explained
The 9 best movies you can now watch at home, from Trolls World Tour to Parasite