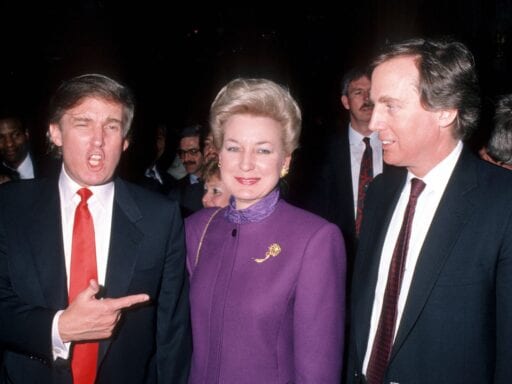 Trump “has no principles. None,” Maryanne Trump Barry said on tape. But there are questions about her involvement in the family business, too.

Donald Trump’s sister, Maryanne Trump Barry, sharply disparaged the president and said she believed he paid a friend to take his SATs in audio recordings published by the Washington Post Saturday night.

Barry’s comments were made in a set of secret recordings in 2018 and 2019 by her niece, Mary Trump, who has emerged as a fierce critic of the president.

Barry said the president “doesn’t read,” that “he was a brat,” and that she did his homework for him, adding that she believes he paid a friend to take the standardized tests that allowed him to transfer from Fordham University to the University of Pennsylvania.

The allegation that Trump cheated on his SATs was one of the oft-questioned parts of a book by Mary Trump released earlier this year, in which she describes the dramatic inner workings of the Trump family and how it shaped the president’s psyche. The recordings with Barry, provided to the Post to substantiate the allegation, seem to be one of the underpinnings of her book.

Mary Trump’s spokesperson told the Post she recorded her aunt to gather evidence supporting her claim that she was cheated out of a significant portion of her inheritance after her grandfather and family patriarch Fred Trump Sr. died in 1999.

Barry, Robert Trump, and the president joined a lawsuit to prevent Mary from getting more inheritance, and she eventually settled the matter in 2001 believing the estate was worth $30 million. She later came to believe it was worth around $1 billion and the family had lied about its worth.

In her book, Mary Trump said she became a major source in a 2018 New York Times investigation into the sprawling financial scandals of the larger Trump family, which amassed their wealth in part due to tax dodges.

Barry’s comments mark the first time a member of the family besides Mary Trump has publicly disparaged the president, and his history of deception. But Barry — a former United States Circuit Court judge — has herself been implicated in the shady financial activity of the Trump family.

The 2018 Times investigation revealed a pattern of tax evasion that allowed the president to receive the current equivalent of at least $413 million from his father. Fred Trump, the family’s patriarch whose real estate business was the foundation of its wealth, further enriched the family by hiding millions of dollars of gifts through shell companies.

As David Barstow, Susanne Craig, and Russ Buettner of the Times reported in 2018:

Much of [the $413 million] came to Mr. Trump because he helped his parents dodge taxes. He and his siblings set up a sham corporation to disguise millions of dollars in gifts from their parents, records and interviews show. Records indicate that Mr. Trump helped his father take improper tax deductions worth millions more. He also helped formulate a strategy to undervalue his parents’ real estate holdings by hundreds of millions of dollars on tax returns, sharply reducing the tax bill when those properties were transferred to him and his siblings.

The IRS didn’t catch on, and Fred Trump transferred more than $1 billion to his children. The Trumps paid only about $52.2 million in taxes, rather than the at least $550 million they could have been forced to pay.

Barry was the co-owner of one of those shell companies used to draw cash from their father’s businesses by marking up purchases already made by employees rather than buying equipment for Fred Trump’s buildings, the Times reported, as it claimed to do. The millions of dollars siphoned through the company went — untaxed — to Barry, Donald Trump and their other siblings.

After the Times’s investigation was released, a judicial conduct council launched an investigation into how Barry benefitted from those tax schemes and may have influenced them. The Times reported last year that Barry, now 83, retired 10 days after a court official told complainants that the investigation would get “the full attention” of the council, ending the investigation.

The president claimed on the campaign trail to be a self-made billionaire and built his trust with many voters on the premise that his business expertise would benefit the country. But the Times’ reporting illustrates how Trump — who was earning $200,000 annually in today’s dollars by the age of 3 — was propped up by family wealth.

The beneficiaries of the family scheme are now among the most powerful people in America. That will be on full display beginning Monday, when the Republican National Convention will convene with part digital, part-in person events throughout the week.

Some of the most prominent speakers at the convention will be members of the Trump family. In addition to the president, Donald Trump Jr. Melania Trump, Ivanka Trump, Eric Trump and Tiffany Trump are all slated as main speakers beginning Monday, making it a true family affair.

When is the next 2020 debate? The vice presidential debate is on October 7.
People are creating self-care plans to make Election Day more bearable
What we can learn from the “second wave” of coronavirus cases in Asia
For contact tracing to work, public health authorities must regain the trust of Black communities
How military superiority made America less safe
The revenge of the blob