Turkey wants to send Syrian refugees to the new “safe zone.” Some refugees are terrified. 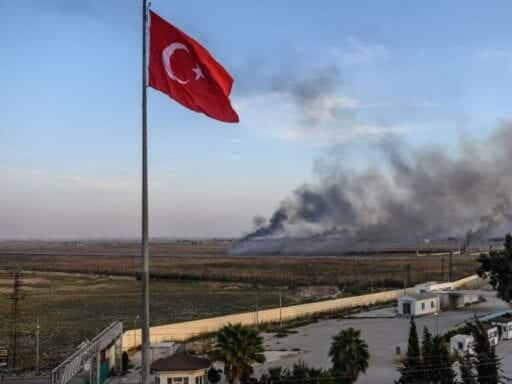 Share
Loading...
Smoke rises from the Syrian town of Tal Abyad, in a picture taken from the Turkish side of the border where the Turkish flag is seen in Akcakale on October 10, 2019, on the second day of Turkey’s military operation against Kurdish forces. | Bulent Kilic/AFP/Getty Images

The fear of deportation keeps many from speaking up about their safety.

When Turkish President Recep Tayyip Erdoğan announced his country’s military operation into Syria against the Kurdish-led Syrian Democratic Forces, people across the world voiced their feelings about the move.

French President Emmanuel Macron and German Chancellor Angela Merkel made a joint statement opposing the offensive and warned of the “grave” humanitarian consequences, while a group of both European and American lawmakers called the offensive “a military aggression and a violation of international law.”

Syrian Kurds decried it as an invasion that was determined to end them. Even President Donald Trump eventually denounced Turkey’s decision as a “bad idea,” despite having essentially given the green light for it by moving US forces out of the area.

But one voice has been noticeably missing from the international conversation: that of the more than 3.6 million Syrian refugees in Turkey, most of whom fled to the country as a result of the Syrian civil war that began in 2011.

Their voices are especially relevant, too. That’s because part of Turkey’s rationale for launching the incursion into Syria was to create a “safe zone” it could send many of those millions of refugees back to — thus getting them out of Turkey.

I wanted to know what those Syrian refugees thought: Did they support Turkey’s move, since it would hopefully enable them to return to their home country? Were they against it, fearing it would put them back into a conflict zone and within striking range of both Syrian President Bashar al-Assad’s forces and ISIS?

“Many Syrians support this operation … the SDF are related to the Syrian regime and, worse, they serve the agenda of the Syrian regime, bringing these areas to the regime,” said a Syrian refugee who spoke under the condition of anonymity due to concerns about his safety. Continuing to work as a journalist became impossible under ISIS, so he fled his hometown of Manbij in January 2014.

He arrived legally in Turkey and intended to return to Syria after the end of the Assad regime. He resides in Turkey full-time but keeps in touch with his parents and friends in Syria, where the SDF regained control of his hometown in 2016.

“Syrian refugees can’t trust anymore the militias inside Syria but felt there were a few good points to this operation by Turkey now,” he said. “The Syrian people are talking about and thinking about their living conditions: Is it safe to return to Syria? Are these roads safe to use?”

Turkey, the land bridge between Europe and the Middle East, initially took them in en masse. But, the refugee from Manbij noted, they were always treated as guests at best, as unwelcome outsiders at worst.

As a signatory of the 1951 Refugee Convention and 1967 Protocol, Turkey acknowledges that refugees are entitled to basic rights like an obligation to be issued travel documents, a right to work, and education, as well as protection from being forcibly returned to their home country.

Additionally, Turkey established its own asylum law, the Law on Foreigners and International Protection, and it enshrined the international conventions’ protected treatment of refugees in Turkish law in 2014. Later that same year, the country adopted the Temporary Protection Regulation that expanded refugee protections to mirror the full spirit of the 1951 Refugee Convention and 1967 Protocol.

However, news coming out of Turkey indicates these laws were often disregarded, with refugees denied access to health care, education, and other basic rights.

“Relations between the Syrian refugees and Turkish people were good, but slowly, slowly it has been changed,” he said, adding, “Any mistakes Syrians made were treated as a mark against us all.”

Yasmina, a Syrian refugee who gave only her first name due to safety concerns, told me that while she does not personally fear deportation to the safe zone, she knows that it is a real danger for others.

“I am not worried myself [about] being deported to the area because I have a residence permit but I fear for my friends from this, especially [because] the situation will not be safe in the absence of a real [government] for the region,” Yasmina said.

Yasmina told me she was arrested by the Syrian regime for speaking out and smuggled to Turkey from her town of Latakia after being released from prison. She said that while her journey to Turkey was difficult and long, she chose Turkey for the opportunity to live in freedom and dignity with the assurance of safety that no longer existed in Syria.

The refugee from Manbij expressed similar worries about the so-called safe zone.

“The biggest issue is that the Turkish military operation [led to] calls for volunteers to return to Syria in that area, but the safe zone isn’t safe,” he said. “Military forces are still there with no civilian management of that area. The biggest risk for returners is that it will all be controlled by Turkish government and intelligence members like it already is now. No one could speak out about their opinions.”

Though Syrian Kurdish forces have withdrawn from the Turkish border region as they agreed to do, the ceasefire with Turkey isn’t holding. Nearly 1,000 civilians and soldiers have died and joint Turkey-Russia military patrols have yet to quell outbreaks of violence. Meanwhile, Syrian Kurdish fighters have accused the Turkish-backed militias in Syria fighting them of committing war crimes.

Yet the refugee from Manbij said that his fellow Syrian refugees in Turkey are more concerned about their own safety than risk speaking up on behalf of the Kurdish civilians being targeted.

“The majority of the Syrian people choose to be silent [about the treatment of the Kurds] for many reasons,” he said. “Turkish authorities are deporting or detaining Syrians, running media campaigns that promote this operation — some refugees don’t know everything about what is happening.” He also acknowledged historic conflict between Arabs and Kurds as another reason Syrians are hesitant to stand up against the Turkish military’s actions.

Yasmina, on the other hand, seemed to support the Turkish military’s actions. “There is no distinction between Kurdish militants and Kurdish civilians,” she said, echoing Turkish officials’ sentiment about the Syrian Kurds, who Turkey considers to be terrorists.

Yasmina and the refugee from Manbij agreed on another point, though: Both noted that the uncertain future for Syrian refugees in Turkey has undoubtedly changed as a result of President Trump’s decision to withdraw US troops from northeastern Syria. And they aren’t expecting any assistance from the US anytime soon.

“The political map in which America plays an important role is unclear,” Yasmina said. “Many things will change in the future because Trump’s decisions are not fixed, and he is every day with a different opinion.”

Senate Republicans have officially passed rules for the impeachment trial. Here’s what comes next.
How to gather with friends while social distancing, according to an expert
The dark underbelly of Amazon Prime Video
The Senate just passed a $480 billion “interim” stimulus bill to tide over small businesses
The pandemic is forcing Democrats to ask: How important is door-knocking, anyway?
Trump’s claim that only immigrants with “the lowest IQ” follow the law was unconscionable