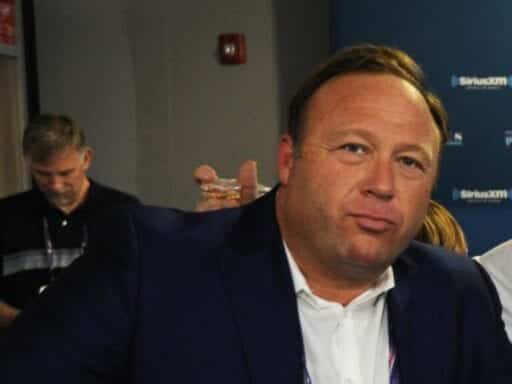 The suspensions are only for seven days, and Jones’s content will still be visible on the site.

After a week of backlash, Twitter has finally suspended the two accounts maintained by far-right conspiracy theorist and Infowars personality Alex Jones — but only for a week.

Twitter first suspended Jones’s personal account after he tweeted a video on Tuesday, August 14 in which he called for his followers to ready their “battle rifles” to act against a wide array of opponents, including the mainstream media — a clear violation of Twitter’s content policy against speech or groups that “use or promote violence against civilians to further their causes.”

Notably, Jones made the video while using the Twitter-owned live-streaming service Periscope — essentially the only live-streaming platform he hasn’t been banned from since YouTube, Facebook, and other major social media sites moved to ban him and remove his content.

On Periscope, which is owned by Twitter, Alex Jones tells supporters to get their “battle rifles” ready against antifa, the mainstream media, and “Chicom operatives” https://t.co/OBHSFc3ofC pic.twitter.com/ntQbh9IKxz

In an excerpt from an interview with NBC’s Lester Holt, which is scheduled to air in full on the evening of Wednesday, August 15, Twitter CEO Jack Dorsey stated that he believes suspensions are an effective tactic, noting that they fall in line with the company’s typical enforcement of its policies.

“I feel, you know, any suspension, whether it be a permanent one or a temporary one, makes someone think about their actions and their behaviors,” Dorsey said.

But Dorsey’s apparent belief that a week-long time-out would be effective against Jones immediately baffled Twitter users:

I’d argue that this line of thinking from @jack is part of the problem. Jones and others are not normal users. Jones has been doing this for 20+ years (and it’s been very lucrative!). A suspension is not going to make him rethink his behaviors pic.twitter.com/jAaZFItjdt

And if anything, the “suspension” seemed to not only not deter Jones, but to antagonize him further. After the suspension of his personal account took effect, Jones continued to tweet and live-stream from the Infowars Twitter and Periscope accounts.

Alex Jones I did not threaten the MSM with battle rifles! The NYT wants me off Twitter! The story is a hoax! https://t.co/H14z7OYYSG

Twitter initially took no action against these other accounts, presumably because they hadn’t directly violated its policies in the same way. But allowing them to remain active clearly undermined whatever potential usefulness might have been gained by banning Jones, reducing the move to a slap on the wrist.

Now, Twitter seems to have to finally come round to an awareness that allowing Jones to continue tweeting from Infowars isn’t a great look. On Wednesday afternoon, the company suspended Jones’s Infowars account, also for seven days only. Though the account will not be able to post, Twitter users can still view its previous content during its suspension.

This exhausting, double-standard-based decision-making, in which Twitter takes reactive and ineffective measures only after sustained public backlash, has become par for the course from Twitter, which appears to want to have its cake and eat it, too. That is, it wants to look very earnest in its efforts to create rules and “tools” to combat toxicity and harassment on the platform, but it balks, again and again, at applying those rules to prominent figures who repeatedly flout them.

We’ve seen this over and over: Twitter establishes strong content policies against violent speech and harassment, but then when the US president repeatedly violates them, it institutes a brain-bending exception to keep from banning him.

Twitter creates a “no hate groups” policy but then allows leading white supremacists like Unite the Right organizer Jason Kessler and white nationalist Richard Spencer to remain active on the website — and only unverifies them after sustained public outcry.

In the case of Jones and Infowars, Twitter appears to have suspended the two accounts mainly to satiate outraged users. But its unwillingness to jettison Jones permanently indicates that it also wants Jones to remain on the site despite its reluctant recent admission that Jones has previously violated many of its rules from both his personal and his Infowars accounts.

While some states try to ban abortion, these states are expanding access
Why the FBI is vetting the National Guard ahead of the inauguration
How the Democratic presidential candidates would combat the opioid epidemic
Trump’s DOJ asks the Supreme Court to strip health care from 23 million people
Back-to-school shopping has gotten easier — but at whose expense?
The last-gasp Brexit deal negotiations, explained