US troops leaving Syria will fight ISIS from Iraq 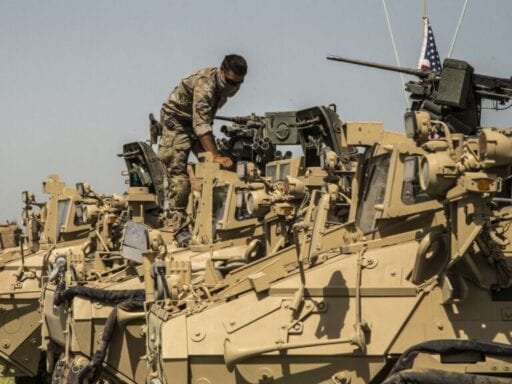 Share
Loading...
US backed forces prepare for an operation in Syria in 2017, during the period of US-Kurdish cooperation. | Bedir Ehmed/Barcroft Media/Getty Images

One week ago, US Defense Secretary Mark Esper announced nearly all US troops in Syria would be withdrawn; Sunday, Esper said those troops will be stationed in western Iraq where they will continue the fight against ISIS. The secretary’s comments come amid concerns the US withdrawal in Syria will facilitate the terrorist group’s resurgence, particularly as Kurdish allies are currently focused on an invasion by Turkey.

Esper told reporters he’s coordinated the move with his Iraqi counterpart as he flew overnight to Afghanistan Sunday, where he plans to kindle the beginnings of a new peace agreement with the Taliban after Trump walked away from talks last month.

The secretary said the troops will have two initial tasks: “One is to help defend Iraq and two is to perform a counter-ISIS mission as we sort through the next steps.”

Trump tweeted Saturday that the reason he wanted to withdraw US troops was that the US has “defeated ISIS in Syria.” The terrorist group has lost a lot of territory in Syria, but the Pentagon says there are still more than 17,000 ISIS fighters there. And Kurdish forces have claimed that ISIS prisoners under their watch have escaped as they worked to repel Turkish forces.

Beyond his claims the US has fully defeated ISIS, Trump has made it clear he wants to end US involvement in the Middle East.

For instance, shortly after a more limited troop withdrawal was announced in early October, the president defended reducing US presence in Syria by tweeting, “GOING INTO THE MIDDLE EAST IS THE WORST DECISION EVER MADE IN THE HISTORY OF OUR COUNTRY!” In the same tweet, he also argued that because the troops were being removed, “THE USA IS GREATER THAN EVER BEFORE!”

But the move Esper announced Sunday — like Trump’s decision to send new troops to Saudi Arabia — doesn’t do that. And it isn’t clear it will silence bipartisan critics in Congress who argue Trump’s Syria policies have damaged US interests in the region.

Wednesday, Trump faced a bipartisan rebuke of his Syria strategy in the House of Representatives, when that body voted 354-60 to condemn his decision to withdraw troops from that country. As Vox’s Ella Nilsen and Li Zhou reported, many of the president’s Republican allies on Capitol Hill are concerned about how the withdrawal will affect Kurdish forces, who are US allies:

Trump’s decision to remove troops from Syria has previously prompted questions from many Republicans who have favored American intervention in the region and voted to preserve it. Sens. Pat Toomey (R-PA), Mitch McConnell (R-KY), and Joni Ernst (R-IA) were among those who argued that Trump’s actions were a “betrayal” of the United States’ Kurdish allies, when he made the announcement last week.

Still others, like Republican Sen. Lindsey Graham, have cited ISIS as a concern as well. Graham tweeted he hopes “abandoning the Kurds won’t come back to haunt us, ISIS won’t reemerge, and Iran will not fill the vacuum created by this decision,” but that he worries Trump’s policies could be “a disaster worse than President Obama’s decision to leave Iraq.”

There are still plenty of ISIS members in the region, many of whom are being held by the Kudish militias in the Syrian Democratic Forces (SDF), as Vox’s Jen Kirby has explained:

The SDF is guarding approximately 11,000 detained ISIS terrorists, including about 2,000 foreign fighters. That does not include the nearly 70,000 people living in the al-Hol refugee camp in northeastern Syria, which contains ISIS families and where the Pentagon says ISIS is actively recruiting new members.

ISIS fighters are reportedly planning mass prison breaks, and the chaos of a Turkish attacks have already allowed ISIS-linked detainees to escape from makeshift prisons in northern Syria while SDF fighters dealt with the incursion.

Trump has worked to downplay concerns of ISIS prison breaks, and his administration has argued, “Turkey will now be responsible for all ISIS fighters in the area captured over the last two years.” And Trump himself has tweeted the president of Turkey “has very strongly informed me that he will eradicate whatever is left of ISIS in Syria.” But Kirby notes that might not be so simple:

Though [Turkish President Recep Tayyip Erdoğan] is happy to claim he’s fighting ISIS, his focus is most certainly the Kurds. And it’s not clear Turkey itself has the capacity — or desire — to take on this responsibility of guarding ISIS fighters or how such a transfer would even work, as the SDF and Turkey are essentially battling each other.

Another issue is that ISIS is known for being adaptable, and experts fear even few ISIS escaped fighters could cause a lot of damage.

“Even a small number of hardened, dedicated fighters could pose a major terrorism threat; research has proven they are far more lethal,” Brookings Institution fellow Daniel Byman wrote for Vox. “The Islamic State is highly opportunistic, and it will use the ensuing chaos and distraction of its enemies to reconstitute itself, increasing the danger of international terrorism as well as local violence.”

Sunday, Trump once again downplayed such fears, tweeting what he said was a quote from Esper (Reuter’s Idrees Ali reported the president seemed to have taken some liberties with the secretary’s words) that maintained everything was going well in Syria and a reminder that he was working to end “endless wars.”

However, with respect to ISIS — and to the Kurds — the full consequences of Trump’s endeavors to do so remain to be seen.

Watch: the 3 best VMAs 2018 performances
Some Tea Party Republicans in South Carolina are voting for Bernie Sanders
How to squirrel-proof the power grid
Wisconsin rejected new gun control laws. Then a mass shooting happened.
Papadopoulos given 14-day sentence as part of the Mueller investigation
Vox Sentences: The $34,000 drug that helps new mothers