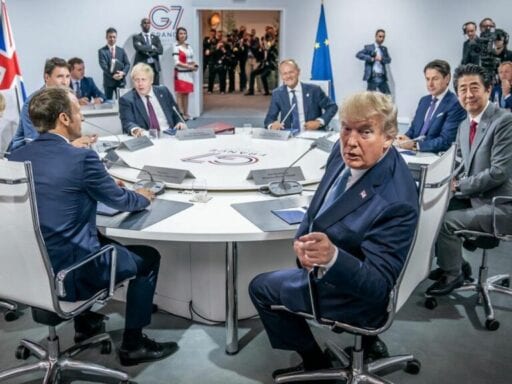 The G7 summit comes to an end with more resolutions than divides for the US; Hong Kong’s pro-democracy protests turn violent.

“I’m so happy to be with you, so thank you for having me. Sorry, I’m so nervous. I had so much more to say but I’m really very overwhelmed.” [Ariana Grande before her set at Manchester Pride, the first time she visited the city following the 2017 terror attack and the benefit concert she held for the victims / BBC]

Watch this: Why losing a dog is like losing a family member

Their life arc is our life arc — from city to suburb, from tragedy to bliss. [YouTube / Dion Lee and Alvin Chang]

The frustrating, enduring debate over video games, violence, and guns

How history textbooks reflect America’s refusal to reckon with slavery

The newest cereals are hip, expensive, and keto-friendly

We’ve worried about overpopulation for centuries. And we’ve always been wrong.

Rudy Giuliani: the Mueller indictments are great news for Donald Trump
New Woodward audio is the starkest illustration yet of how Trump misled about coronavirus
Teen Titans’ Starfire is an orange alien. Racist “fans” don’t want a black woman playing her.
Boris Johnson had a really bad day in Luxembourg. The Incredible Hulk was involved.
How will 2020 Democrats deal with jobs eliminated by artificial intelligence?
Furious Oracle employees are demanding that Larry Ellison cancel his Trump fundraiser