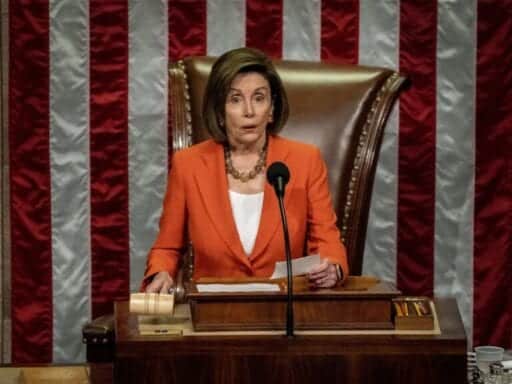 The vote is not expected to be very close.

The House of Representatives is set to take a historic vote Wednesday that will likely make Donald Trump the third president ever to be impeached.

Two articles of impeachment — one alleging abuse of power, and the other obstruction of Congress — will be brought to the full House for votes Wednesday. After six hours of floor debate and likely some procedural wrangling, both articles are expected to pass in the late afternoon or evening with the support of nearly every Democrat, and few (if any) Republicans.

Final votes on each article are expected to begin imminently.

These votes will be the culmination of the House’s impeachment process over the Ukraine scandal — in which Trump tried to pressure the Ukrainian government into investigating his 2020 rival Joe Biden, by withholding a White House meeting and military aid. They will not, however, remove the president from office. Rather, a trial in the Senate is coming next, in January — and that chamber is overwhelmingly likely to acquit Trump, leaving him in power.

The House votes are unlikely to be close. Currently, it would take 216 votes to pass an impeachment article, if all members are present and voting. There are 233 Democrats, and only two of them have announced they oppose impeachment so far. Those are Rep. Collin Peterson (MN) and Rep. Jeff Van Drew (NJ), the latter of whom is reportedly switching the Republican Party. One other Democrat, Rep. Jared Golden (ME), announced he would vote for the first impeachment article (on abuse of power) and against the second (on obstruction of Congress).

But most other Democrats, including those representing districts Trump won in 2016, have gradually announced they plan to vote in favor of impeachment.

However, no Republicans have committed to support impeachment, unless you count Rep. Justin Amash (I-MI), who left the Republican Party earlier this year. So an almost entirely party-line split is expected.

It is, however, noteworthy that the margin won’t be razor-thin. It’s possible to argue that, politically, it would have been smarter for several more Democrats representing Trump-backing districts to oppose impeachment, and better ensure their reelection. But those Democrats themselves decided not to do that — whether because they felt Trump’s conduct was so egregious on the merits, or because they feared a backlash from the Democratic base if they voted no.

If the House does impeach Trump, he will join Andrew Johnson and Bill Clinton, the only two presidents ever to have been impeached. (Richard Nixon was headed for impeachment but resigned his office before it could happen.) But both Johnson and Clinton were, in the end, acquitted by the Senate, and remained in office. And that will likely be Trump’s fate as well.

Some Democrats have wanted to impeach Trump almost since he was inaugurated in 2017, but that was a minority position in the House caucus as 2019 began with Democrats in control for the first time since he took office. House leaders like Speaker Nancy Pelosi in fact spent most of the year trying to fend off pressure from the party’s base to impeach Trump (on either the Mueller investigation’s findings or other alleged abuses of office).

But everything changed in September, when news broke that a whistleblower alleged that Trump pressured Ukraine’s government to investigate the Bidens. Dramatic revelation after dramatic revelation followed, and Democrats — including some moderate members in Trump-voting districts — decided they had to take action. So Speaker Nancy Pelosi backed an impeachment inquiry for the first time on September 24.

What followed was a relatively brief but surprisingly revelatory fact-gathering process in the House, led by Chairman Adam Schiff’s Intelligence Committee. A lineup of current and former administration officials defied the White House’s edict not to cooperate with the impeachment inquiry, and came in to give closed-door depositions. One witness, former special representative for Ukraine Kurt Volker, even turned over a series of damning text messages laying out the efforts to pressure the Ukrainians.

The Intelligence Committee then called some of those witnesses back to give testimony at public hearings in November. Testimony from all these witnesses confirmed and further fleshed out the whistleblower’s initial account — and made clear there was a months-long pressure campaign on the Ukrainians, involving not one but two quid pro quos. They were: a White House meeting for Ukraine’s president in exchange for the announcement of investigations, and the release of $391 million in blocked military aid in exchange for that announcement.

Yet the Trump administration refused to turn over any documents whatsoever, and other witnesses with potentially important information decided to obey the White House’s demand that they not testify. So, rather than spend months fighting legal battles in court (as they have in other oversight investigations into the Trump administration), Democrats decided to simply move forward with what they had — arguing that their findings more than merited impeachment already.

In December, the Intelligence Committee completed a report on their findings and passed the baton to the House Judiciary Committee, which has jurisdiction over impeachment. After just one hearing with legal experts, Democrats on that committee drafted their articles of impeachment — alleging abuse of power, and obstruction of Congress — and approved them one week later.

House Republicans, though, have closed ranks around the president, defending his conduct with a variety of justifications. Some have complained about the process for the impeachment inquiry, some say they haven’t seen proof that Trump did what’s alleged, some say that what’s alleged isn’t so bad even if Trump did do it.

Those members of Congress who have tried to oppose their party on impeachment have quickly found their lives remarkably uncomfortable. Amash of Michigan announced he supported Trump’s impeachment over Mueller’s findings back in May, but then left the GOP to become an independent in July. Van Drew, meanwhile, announced he opposed impeachment — and, this month, word got out that he planned to switch over to the Republican Party.

Republican opposition won’t impact the outcome in the House, which is controlled by Democrats. But it will be a far bigger problem for impeachment supporters in the Senate, which is controlled by the GOP, and where it would take a 67-vote supermajority to actually remove Trump from office. So long as Republican support for Trump remains strong, that isn’t going to happen. (And his job approval numbers have actually increased a bit since the inquiry began.)

Democrats, then, will likely have to content themselves with putting a black mark by Trump’s name in history — and will have to redouble their efforts to try to oust him in the 2020 election. Because while the impeachment inquiry has unearthed a great deal of new information about Trump’s misconduct, that information has changed few, if any, Republican minds.

The first post-debate polls say Biden won
The constitutional change at the heart of the UK Parliament’s endless deadlock
Yes, people who’ve had Covid-19 can still benefit from the vaccine
Three coronavirus task force members will quarantine after being exposed to virus
Trump’s China fight has extended to TikTok. But is it really a threat?
We asked 8 young people why they joined the global climate strike