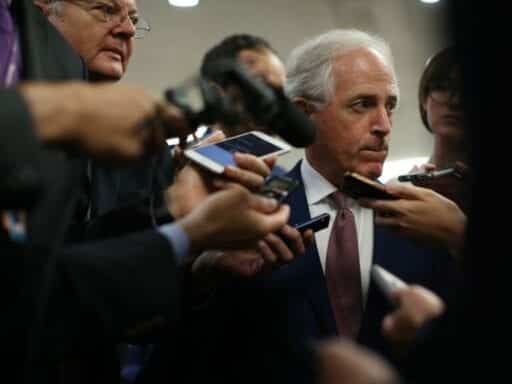 They were light on specifics.

It’s not yet clear if Christine Blasey Ford will testify before the Senate Judiciary Committee next week: She hasn’t responded to the invitation to testify about her accusation of sexual assault against Brett Kavanaugh as of Tuesday afternoon.

Republican senators said Tuesday that showing up is the minimum Ford would need to do to for them to find her credible.

“If she doesn’t come that would be very problematic, and the committee should move on with its work,” Sen. Bob Corker (R-TN) said Tuesday.

Ford has accused Kavanaugh of sexually assaulting her while the two were both teenagers, an allegation that he has unequivocally denied. Lawmakers are interested in hearing from both of them before moving forward with a vote on Kavanaugh’s nomination. Sen. Susan Collins (R-ME) — a key swing vote in the Kavanaugh fight — has suggested that lawyers for both Kavanaugh and Ford should be able to question the other person allegedly involved in the incident.

Kavanaugh and Ford are the only two witnesses slated for the panel, meaning that the testimony will likely be a case of Ford’s word against Kavanaugh’s.

Already, Sen. Orrin Hatch (R-UT) has questioned Ford’s account of the events. On Monday, Hatch told reporters that he thought Ford could be “mixed up” about the encounter.

Asked what they needed to hear from Ford to find her credible, most senators didn’t get specific: “The whole idea is not to pre-judge,” Sen. James Inhofe (R-OK) said. But he added a few moments later, “I feel very certain that Kavanaugh has been an outstanding judge and is going to prevail.”

Here’s what other Republicans had to say when asked about what they’d like to hear from Ford during the hearing next week.

Sen. Bob Corker: “If she doesn’t come that would be very problematic and the committee should move on”

Do you find these allegations to be credible?

I don’t have any basis to know. I don’t usually pay attention to hearings in other places, but I’m going to be in a place — I usually travel up that day, but I’m probably going to come up on Sunday instead and make sure I’m in a place that I can witness the whole thing.

What would you need to hear that would make this credible?

Should there be additional witnesses?

Oh, I don’t know — for me, I was very forward on believing that she should be heard. As far as what the committee decides, as far as who else ought to be heard, that’s their decision. I just felt that it was important that if she had these types of serious allegations that she ought to have the opportunity to be heard. And I hope she is going to take advantage of that. If she doesn’t — that’s a whole other thing.

To have the opportunity to be heard and not be heard, is to me … I think the committee should then move on. I don’t even understand why there is even hesitation. Apparently she feels strongly about this, and she has been given the opportunity to be here. I was very forward on pushing for that to occur, and if she doesn’t come that would be very problematic, and the committee should move on with its work.

Is hearing from her and from Kavanaugh a sufficient investigation of these allegations?

Tim Scott (SC): “First goal is for her to show up”

How do senators question her and probe her without looking like they’re bullying a potential sexual assault victim?

I won’t have a chance to do it, so I can’t answer the question about what they’re going to do.

You guys have talked about strategy. Is this a concern of yours?

It’s not a concern of mine. I think we’ll get the information necessary. First goal is for her to show up. The second goal is for us to have an open discussion about all the W’s.

What would you need to hear from Christine Blasey Ford to prove that her allegations are credible?

First, we should hear from her. We just need to hear.

Sen. James Inhofe: “The whole idea is not to pre-judge.”

What would you like to see from the hearing [with Christine Blasey Ford] next week?

Let them say it. Why would I suggest to you what I want to see? Because if I do that, then you can say — well, that means you think — the whole idea is not to pre-judge.

I think it’s a good idea that they are getting together. I feel very certain that Kavanaugh has been an outstanding judge and is going to prevail.

Should they bring other witnesses … [like Mark] Judge forward?

I think that’s ultimately a judgment they’ll make, the Judiciary Committee. They’re trying to create an opportunity for her to be heard. They’re trying to get an opportunity for Judge Kavanaugh to be able to clear his name and I think at this point, in addition to that, what the Judiciary Committee tries to do is going to be largely up to them. I trust Sen. Grassley. I think the Committee is trying to operate in as fair a way as possible given the late timing of this.

What would you like to hear from Dr. Ford?

What are you looking for on Monday’s hearing with Brett Kavanaugh and Christine Blasey Ford?

What in Christine Blasey Ford’s testimony would you need to find it credible?

Well, I hadn’t looked at it. I hadn’t seen her testimony. I hadn’t condemned anybody. Let’s see what comes through the process. There’s a process, and that’s what we’ll be looking at Monday. I was here during the Thomas hearings.

So how do you determine the situation, having been there?

Well, it’s kind of like sitting on a jury. You look at the situation and everything, and you make a determination, based on the judgment that you make.

Predictions are hard, especially about the coronavirus
How will the revived Last Man Standing tackle Trump?
Why Cardi B. and Megan Thee Stallion’s “WAP” is actually a public health triumph
Now that the UK is stockpiling food, maybe it’s time to admit Brexit is a mistake?
The comforts of ASMR in the coronavirus pandemic
The Good Place gets weirder than usual when “Chidi Sees the Time-Knife”