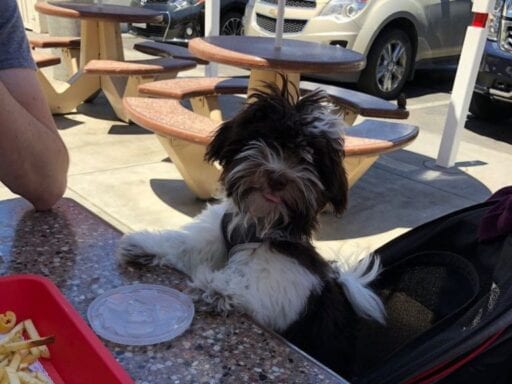 Charlie the puppy just helped teach us a vital lesson about crossing the ideological aisle in 2018.

It’s the start of another week of sociopolitical chaos and dysfunction, so we’d like to redirect your thoughts away from the ongoing threat of global catastrophe and toward the triumphant return of one of the greatest memes in internet history.

Grab your tissue boxes and prepare to renew your faith in the progress of the human spirit, because “Brent” now has a good dog of his own.

You might know Twitter user @dog_rates, actual name Matt Nelson, from his beloved dog-ranking system, in which dogs of all stripes get effusively virtually canoodled and praised, as they deserve. For example, here is a Very Good Dog reminding us that all human beings have worth and dignity and deserve to be treated equally under the law:

On the last day of #PrideMonth we still only rate dogs. Try not to submit absolutely fabulous unicorns. Thank you… 14/10 (IG: themagicalsamoyed) pic.twitter.com/y29THjKC79

And you might especially remember his iconic rejoinder to a dog-rating hater known only as “Brant”: “They’re good dogs, Brent.”

Pure-hearted and direct from the soul of the internet, this very good quip seems as though it has always been with us. In fact it was dropped just two years ago, in the before-time of 2016, when we all could still believe in America as a place of idealism and democracy instead of a corrupt capitalist wasteland riddled with extreme, racist ideologies and adults who steal baseballs from children.

Nelson and his good-hearted dog tweets have continually done the daily work of injecting much-needed whimsy into our ongoing struggle against the darkness. But now he’s joined forces with an unlikely ally to remind us that there is still love and joy and the possibility for reconciliation in the world. Alongside him? His archnemesis Brent (real name Brant Walker).

Brant/Bront/Brent seems to have become quite chummy with Nelson in the intervening years. Perhaps they were inspired to forge a friendship despite their polarized ideological platforms, out of a shared wish to ensure that kindheartedness, empathy, and hope, rather than wastefulness, greed, and cruelty, continue to be the driving forces behind modern American society.

In private Twitter messages, Brint approached Nelson with a stunning update on his life, and a proposition: Would Nelson like to virtually meet, and rate, Brynt’s new dog?

Thus, the world met Charlie, and nearly two years after the iconic exchange occurred, it ended as we can only hope all such conflicts will: in peace, happiness, and plenty of In-N-Out fries for everyone.

Folks… we have come full circle. This is Charlie, dog of Brant. He naps in a pineapple and really likes french fries. 14/10 you’ve got a good dog, Brent pic.twitter.com/iYnjpphWau

Of course, the cynical among us might say that by the very dog-rating standards he advocated for in 2016, Brœnt’s dog isn’t more than a 6.5 or a 7.0 or so on the @dog_rates scale of dog rating. But that argument misses the point about what made this such a popular meme.

The assertion “they’re good dogs Brent” was never about aesthetics, or even about dogs. It was really about expressing a tranquil, calm joy in the face of pessimism and buzz-harshing. It was a moment in which a hater was met, and vanquished, by the sheer power of commitment to an idealistic principle. In this case, the principle is that all dogs are good dogs. The @dog_rates Twitter account had clearly placed that principle at the heart of its simple mission, and Brient’s cynicism simply couldn’t counteract the strength of its commitment to celebrating good dogs.

So when we celebrate Nelson’s simple own of Brünt, we’re also saying that we, too, believe that all dogs are good dogs; that there are fundamental truths about the inherent goodness and rightness of all dogs, and maybe even all of earth’s creatures — including humans — that transcend snarky internet criticism.

Ultimately, this compassionate and open-hearted read on the world extended to Brent himself: Brant got his own dog rated, and Charlie was deemed to be a Good Dog, worthy of a 14/10 on the dog_rates scale.

While the return of this meme might not seem like a hard-hitting retaliation against the perpetual attacks on our basic humanity which currently punctuate daily life in America, it’s actually a crucial restorative.

For one thing, its continued popularity gives us all common ground, as so much of the pet-loving internet does. For another, it’s a blunt reminder of our historical template for progress: Get to know the thing you hate — in this case, cute dogs — and you may learn to love it.

Even more crucially, if we extend kindness to the haters in our midst, while standing strong in our convictions about the worth and dignity of all earth’s creatures, soon, they, too, might learn to view the beings around them with love and generosity instead of distrust and skepticism. This teachable moment continues to illustrate that deep down, all of us just want to be loved for who we are, patted on the head, and told we’re good.

The 20 best documentaries of the 2010s
Trump said he might fire Fauci after the election, but “don’t tell anybody”
How world leaders responded to Biden’s inauguration
Moderna released more Covid-19 vaccine results. They’re very encouraging.
Hurricane Florence will slow down. That’s a bad thing.
Thinking about traveling again? Here’s how to assess the risks.