What happens to Mueller’s investigation if Jeff Sessions is fired or quits? 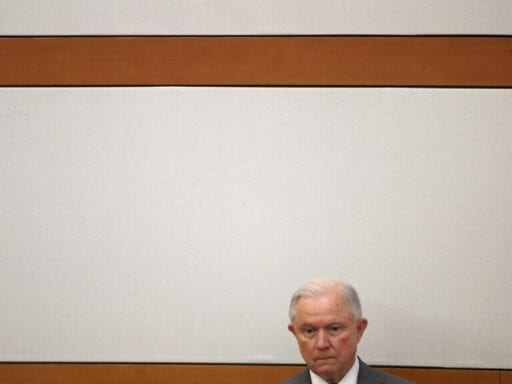 The rumor mill about an attorney general replacement is churning again.

Speculation over Attorney General Jeff Sessions’s job security is one of the long-running dramas of the Trump administration.

But it really, finally, looks like his days in office are numbered.

The Wall Street Journal’s Michael C. Bender reported that President Donald Trump is already considering a number of candidates to replace Sessions by the end of the year. It follows another story earlier this week in the Washington Post that suggested Trump had talked with Matthew Whitaker, Sessions’s chief of staff and a Trump loyalist, about taking over his boss’s position.

Sessions’s departure seems inevitable, as the president has frequently railed against his “beleaguered” attorney general for failing to sufficiently protect him from special counsel Robert Mueller’s Russia probe.

To recap, Sessions recused himself from the investigation into Russian interference in the 2016 election in March 2017 because of his involvement in the Trump campaign (and questions about his own Russia contacts).

Deputy Attorney General Rod Rosenstein then took over the probe and appointed Mueller. Rosenstein has also been the subject of some will-he/won’t-he drama about his potential firing during his tenure. (That went into overdrive in late September when it appeared Rosenstein was on the brink of stepping down, only to survive again.)

Sessions’s gig is likely safe (and Rosenstein’s too) through the midterm elections. But after November 6, it’s beginning to seem like a foregone conclusion that Sessions will be gone — whether by resigning or by getting axed.

His Senate firewall has started to crumble in recent weeks after key lawmakers who’d defended him before signaled an openness to confirming a new AG. And Trump and his party will be much more insulated from the political consequences if he actually fires Sessions after the midterms. Republicans also seem likely to pick up a few seats in the Senate, widening their majority and giving Trump some cushion if he attempts to get a new, handpicked attorney general confirmed.

It’s likely to be a controversial confirmation process, as Trump has already made clear he wants a loyal attorney general. And whoever takes that job will almost certainly assume control of the Mueller investigation, giving a new AG the power to let Mueller continue unimpeded — or curtail his mandate.

Who gets to be the next Jeff Sessions?

Sessions’s exit isn’t a definite thing, though many in the White House and Justice Department expect him to call it quits by the end of the year, according to the Wall Street Journal.

And if that happens, a few names have started to circulate on who could replace Sessions as attorney general.

Whitaker, currently Sessions’s chief of staff, keeps popping up as a potential candidate for a top DOJ job. His name first appeared in September during the turmoil over Rosenstein’s job after a New York Times report that said Rosenstein had suggested secretly taping the president and talked about invoking the 25th Amendment to remove him from office. In the aftermath, the White House purportedly selected Whitaker to take over as acting deputy attorney general if Rosenstein resigned.

Such a move is allowed under the Federal Vacancies Reform Act of 1998, which lays out who can serve in acting capacities when positions open up in the executive branch. Certain high-level career officials, like Whitaker, are eligible to serve in an acting capacity.

Rosenstein didn’t step down, so that never happened. But Whitaker’s name hasn’t gone away either.

The Washington Post reported on Wednesday that Trump had talked with Whitaker about replacing Sessions, though it’s unclear if he meant for him to be a temporary replacement, or if Whitaker would be formally nominated for the top law enforcement job.

Whitaker, a former US attorney from Iowa, is the White House’s “eyes and ears” in the Justice Department, according to the New York Times. He’s also a fiscal and social conservative who unsuccessfully ran for Senate in 2014. He aligns with Trump (and Sessions) when it comes to issues like crime and immigration, but Whitaker comes with the added perk (for Trump) of publicly expressing some displeasure about the Mueller investigation.

In August 2017, before joining the Trump administration, Whitaker published an op-ed for CNN that accused Mueller’s investigation of being “dangerously close to crossing a red line” if it probed Trump’s finances. “If he were to continue to investigate the [Trump family’s] financial relationships without a broadened scope in his appointment,” Whitaker wrote, “then this would raise serious concerns that the special counsel’s investigation was a mere witch hunt.”

But Whitaker’s name isn’t the only one that’s been mentioned. Five other candidates have been floated as well, according to the Wall Street Journal. At least three are currently serving in the administration, and though they’d face a new Senate confirmation if nominated for the AG job, they’ve at least successfully made it through the process.

Those mentioned in the article include:

That’s likely just the beginning of a list that’s bound to change in the coming weeks.

Also notice that it doesn’t include a guy who once seemed to really want the job but is increasingly starting to look as if he’s out of the running. Sen. Lindsey Graham (R-SC) gave an impassioned defense of Supreme Court nominee Brett Kavanaugh during his hearing about sexual assault allegations last month — and it looked a heck of a lot like an audition for the role of attorney general. (Or some other spot in the Cabinet, at least.)

But Graham has since said he has “zero interest” in serving in Trump’s Cabinet. Trump may also be wary of selecting Graham for the AG job, according to the Wall Street Journal, because he hasn’t forgotten Graham’s switch from sometimes Trump critic to cheerleader.

What a new attorney general could mean for the Mueller investigation

Whoever becomes the next attorney general will ultimately take charge of the Mueller investigation, assuming the investigation is still ongoing, and so long as Trump’s nominee doesn’t have any conflicts that would force them to recuse themselves. That person will have the power to let Mueller keep doing what he’s doing — or curtail or shut down the investigation altogether.

In short, this is all going to make for some intense confirmation hearings. Trump has indicated that he believes his attorney general should protect him. His pick for AG will almost certainly be questioned about this, and about whether Trump extracted any loyalty pledges. Lawmakers will also likely grill the nominee on his stance or opinions on the legitimacy of the Mueller investigation.

But if Trump wanted to tinker with the Mueller investigation, he wouldn’t necessarily have to wait for a new attorney general to get confirmed. If Sessions quits, Trump will be able to appoint an acting attorney general who’ll also take control. That could be Whitaker; it could also be Azar, Sullivan, or Bradbury, who’ve all been Senate-confirmed already and are also eligible to serve in an acting capacity under that Federal Vacancies Reform Act.

There’s some debate as to whether Trump could use the Federal Vacancies Reform Act to chose a replacement if he fires Sessions. A veterans advocacy group challenged former VA Secretary David Shulkin’s interim replacement on these grounds, but the lawsuit didn’t get anywhere because the case was dismissed when the issue resolved itself — and so the question still hasn’t been tested in court.

No matter how Sessions officially leaves — whether by resignation or outright firing — it’s clear that Trump’s pressure campaign ended up working. Sessions has dutifully carried out the Trump agenda on crime and immigration. But his decision to recuse himself from the Mueller investigation has haunted his tenure and irrevocably damaged his standing with the president.

If Sessions departs, Trump may have the chance to pick an attorney general who’ll continue to carry out his policy agenda — and maybe one who won’t do the very “unfair” thing and recuse himself from the Russia investigation.

“Release the JJ cut”: the Star Wars conspiracy that lets fans warp reality
The violent protests in Iraq, explained
Trump judge lashes out at a transgender litigant in a surprisingly cruel opinion
“I don’t want to be a depressing drumbeat”: TV comedy legend Greg Daniels on his daring new shows
Fandom went mainstream in the 2010s — for better and worse
My family founded Barneys. Now the great department store is closing.