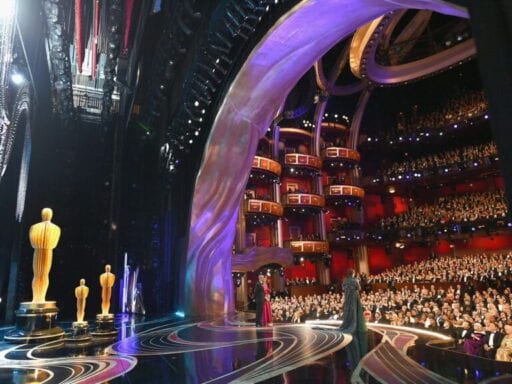 Share
Loading...
Olivia Colman accepts the Actress in a Leading Role award for The Favourite onstage during the 91st Annual Academy Awards at the Dolby Theatre on February 24, 2019 in Hollywood, California. | Matt Petit – Handout/A.M.P.A.S. via Getty Images

Joker leads the nominations with 11 nods. 1917 and Parasite are frontrunners to win Best Picture.

At last, the first Oscars of the new decade are upon us, and they’re as unpredictable as ever. The 2020 Academy Awards ceremony will air live from Los Angeles’s Dolby Theatre on Sunday, February 9, at 8 pm Eastern/5 pm Pacific on ABC. The awards will also stream live on Oscars.com and the Academy’s Facebook page.

Compared to the controversy-ridden 2019 Oscars, the 2020 awards arrive with few flashpoints of conflict. The Academy sidestepped any possibility of repeating last year’s hosting snafu by choosing, for the second time in a row, to forgo a host. The ceremony is taking place unusually early this year (typically it happens at the end of February or the beginning of March), cutting the campaign season short. But squabbles and scandals have been kept to a minimum.

Still, there’s once again a startling lack of diversity among the nominees — particularly in the four acting categories, in which only one nominee out of 19 is a person of color, and the directing category, in which all five nominees are men. This has rekindled debate regarding the monolithic nature of the Academy of Motion Picture Arts and Sciences (the organization that hands out the Oscars). As of 2019, about 32 percent of the Academy’s roughly 9,000 members are women; about 16 percent are from ethnic minorities. That’s an increase from 2015, when the numbers were 31 percent and 8 percent, respectively. But the Academy still has a long way to go in making its ranks more inclusive.

The biggest change since last year is a name change: The Best Foreign Language Feature category was renamed in April 2019 to Best International Feature, in an attempt to modernize it. But the eligibility rules were not updated, so many of the problems with the category remain.

As for which movies and actors will win trophies on Sunday, there aren’t many sure bets. A number of films — among them 1917, Once Upon a Time in Hollywood, Parasite, and the most-nominated film, Joker — have won many precursor awards throughout the season, making it difficult to predict which way the Academy will swing, particularly in regards to the coveted title of Best Picture. Other nominees, including Little Women, Marriage Story, The Irishman, Ford v Ferrari, and Jojo Rabbit, aren’t considered favorites by pundits, but have taken home a moderate number of awards as well and could win at the Oscars for their directors, screenplays, and actors.

So as in recent years, it’s anyone’s guess as to what will happen. But 2019 was an unusually strong year for film, and there’s a lot to celebrate.

Where: Live on ABC, or via the ABC livestream on ABC.com or the ABC app in supported markets. Red carpet coverage will also be broadcast on the Academy’s live Twitter stream.

To livestream the ceremony at ABC.com or on the ABC app, you’ll need a cable TV provider login. You must also be in one of the following markets: Chicago, Fresno, Houston, Los Angeles, New York City, Philadelphia, Raleigh-Durham, or San Francisco.

Host: For the second year in a row, the Oscars will not have a host. But a star-studded array of presenters will be on hand to give out the awards.