Why the Oscars won’t have a host this year 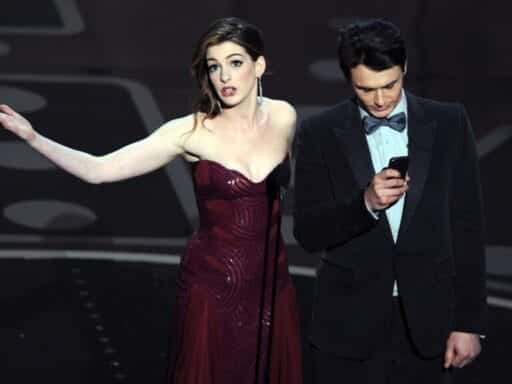 For the second year in a row, the Oscars will go host-free. It’s likely the start of a new normal.

Sunday’s Oscars ceremony will be hostless for the second year in a row. The Academy of Motion Picture Arts and Sciences announced via Twitter in January that no host would be forthcoming. Instead, it named a long lineup of quality presenters, from fan favorites like (2020 Oscar nominee) Taika Waititi and Lin-Manuel Miranda to industry legends like Steve Martin and Sigourney Weaver.

That roster of A-listers should hopefully ensure that the ceremony can still provide something for everyone — or at least the roughly 30 million people who’ll bother to tune in. In fact, it seems likely this hostless streak is the start of a new normal.

This year’s #Oscars at a glance:

It’s been a long time since January 2019, so you might not remember that last year was the first time in two decades that the Oscars had gone without a host. The Academy went host-free when its first choice, Kevin Hart, flounced from the job after coming under social media fire.

The Academy had originally announced in December 2018 that Kevin Hart had accepted the gig, only for Hart to quickly become embroiled in public backlash over old homophobic jokes he’d made on Twitter. Reportedly pressed by the Academy to apologize, Hart then changed his mind about hosting and backed out, stating on Twitter that he didn’t want controversy around him to be a distraction from the awards.

“I do not want to be a distraction on a night that should be celebrated by so many amazing talented artists,” he wrote.

But while the inciting incident that iced out last year’s Oscars host may have been a volatile mix of Hart’s ego and cancel culture, it speaks to a larger exhaustion that Hollywood celebrities seem to feel over the ceremony.

Hosting the Oscars has often been viewed as a huge achievement for entertainers, particularly comedians who get to fill the shoes of legendary hosts like Billy Crystal and Whoopi Goldberg. But there are plenty of good reasons why the Oscars gig seems to be a harder sell these days. For a start, it doesn’t pay well. Jimmy Kimmel claimed he earned $15,000 in 2017 for hosting, and for high-profile stars with busy lives, that’s probably just not enough to make the time, stress, and potentially dangerous overexposure worth it.

Increasingly, that last factor seems to be the tipping point. As another controversial Oscars host, Seth MacFarlane, argued in 2019 after he turned down an invitation to replace Hart, the host essentially signs up to have a target placed on their back.

“Look, it’s a gig that has all eyes on it,” MacFarlane told Entertainment Weekly. “And when you’re doing something that’s that much in the spotlight, with that much focus on it, that much intensity, you’re going to have a lot of opinions from a lot of people. I’m trying to think of the last time that I read a review of the Oscars the next day where everyone is raving about it — it’s been a long time.”

By contrast, without the pressure of hosting, last years’ Oscars ceremony went off without a hitch. Even better, it saw a slight upward shift after an overall ratings decline, so maybe going the hostless route will continue to help the ceremony pull out of its slump.

And that makes sense; after all, as Vox’s Alissa Wilkinson wrote last year, “Part of the job of the Oscar host is to represent Hollywood to the world — to project, in tandem with the Academy’s chosen winners, how Hollywood sees itself, and what it aspires to be.” An evening of diverse presenters reflects Hollywood’s ongoing overall push to diversify and tell more unique stories from all walks of life. It’s true that this year’s actual nominees don’t really represent that diversity — but many of the celebrities themselves do, and for an increasing number of moviegoers, watching them is probably more entertaining than a single host telling the same bad jokes all evening.

Besides, for the past few years, all of the show’s most memorable moments have had little to do with the host. Moments like “Gary from Chicago” and the amazing 2017 Best Picture snafu prove that the best entertainment arises from unexpected, unrehearsed spontaneity, not pre-scripted canned jokes. It’s true for the Oscars, as it is with life. We look forward to this three-hour philosophy lesson.