Why did Trump let the Ukraine aid through? 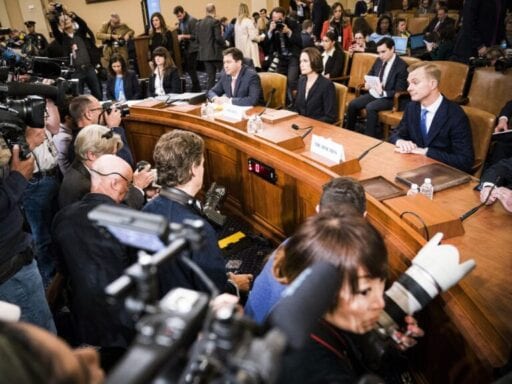 Share
Loading...
Fiona Hill, the National Security Council’s former senior director for Europe and Russia, and David Holmes, an official from the American embassy in Ukraine (right), arrive to testify before the House Intelligence Committee on November 21, 2019. | Sarah Silbiger/Getty Images

How David Holmes’s impeachment testimony bears on one of the scandal’s biggest mysteries.

There’s been a key mystery throughout the impeachment inquiry. After holding up hundreds of millions of dollars in security assistance to Ukraine for months, why did the Trump administration finally let that aid go through on September 11?

Testimony at Thursday’s hearing from David Holmes, a State Department senior official based at the US embassy in Kyiv, pointed toward one possible explanation — one that would look quite bad for President Donald Trump. That is to say: Trump let the aid through because he thought he’d gotten what he wanted.

To recap: Trump officials’ pressure on Ukraine to agree to a quid pro quo escalated gradually. Initially, in July and August, they said President Volodymyr Zelensky wouldn’t get a White House meeting unless they made a statement committing to investigations Trump wanted — investigations into Burisma (the gas company Hunter Biden sat on the board of) and into purported Ukrainian interference in the 2016 election.

But in late August, news broke that Trump was blocking hundreds of millions of dollars in military assistance for Ukraine. Then, on September 1, US Ambassador to the EU Gordon Sondland told the Ukrainians they wouldn’t get this security aid, either, unless they made the statement on investigations. Intense discussions took place over the following week, and by September 8, Zelensky had agreed to the deal — he’d make an announcement about both of these investigations in a forthcoming interview with CNN.

Then, on September 11, the Trump administration announced they were lifting the hold on the aid for Ukraine. But Zelensky had not made any public announcement about investigations, and he never ended up doing so.

So why did Trump let the aid through? In the absence of direct evidence about this or testimony from people who would know, there have been two popular theories.

First, Republicans like Rep. Jim Jordan (R-OH) have argued that this shows that, in fact, Trump did nothing wrong. Despite claims that Trump was linking the aid to investigations, they say, he let the aid through without any announcement on investigations. Therefore, no quid pro quo, it’s a witch hunt, etc.

Second, Democrats have put forward an alternate theory — that Trump only let the aid through because he “got caught.” They’ve pointed to various events that happened in the days before Trump let the aid through. The intelligence community inspector general told Rep. Adam Schiff’s House Intelligence Committee that there was a whistleblower complaint. Schiff announced an investigation into Rudy Giuliani’s influence on Ukraine policy. Diplomat Bill Taylor put his concerns that the aid was being blocked to help a “political campaign” in writing. And National Security Adviser John Bolton, who had deep misgivings about this caper, was ousted. So it seemed a plausible story to many that Trump backed off his demand because the heat was on.

Yet, there is also a third possibility — that Trump let the aid through because he thought the deal was in effect, and expected Zelensky to make the announcement on investigations imminently.

This is the possibility that some of Holmes’s testimony indicates. “Although we knew the hold was lifted, we were still concerned that President Zelensky had committed, in exchange for the lifting, to give the requested CNN interview.” Holmes said. “We had several indications that the interview would occur.”

On September 13, two days after the hold was listed, Holmes said, a Sondland aide called a staffer at the US embassy in Kyiv. That Kyiv staffer then texted Holmes: “Sondland said the [Zelensky] interview is supposed to be today or Monday [September 16] and they plan to announce that a certain investigation that was ‘on hold’ will progress.”

That same day, Holmes and Bill Taylor met President Zelensky, and on the way out, they spoke to his adviser Andriy Yermak. Taylor “stressed the importance of staying out of US politics and said he hoped no interview was planned,” Holmes said. “Mr. Yermak did not answer, but shrugged in resignation as if to indicate they had no choice,” he added.

“In short, everyone thought there was going to be an interview, and that the Ukrainians believed they had to do it,” Holmes said.

In his closed-door deposition last week, Holmes was a little more explicit about what he was driving at. “This is a theory” rather than conclusive evidence, he explained. “We worried that the hold was lifted after Zelensky potentially gave a commitment to do the interview. And I included some testimony, some evidence that might have pointed in that direction.”

For the time being, though, this remains a mystery. The people who know why the aid was blocked in the first place, and why that hold was lifted — such as acting White House Chief of Staff Mick Mulvaney — aren’t talking.