Why fake dating is a great romantic trope, explained by To All the Boys I’ve Loved Before 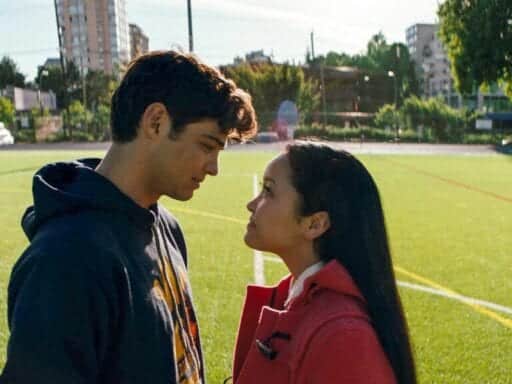 To All the Boys I’ve Loved Before adores its fake dating trope with all its bashful, earnest heart.

To All the Boys I’ve Loved Before, Netflix’s surprise hit teen romance, is an unabashedly trope-based movie. It’s not trying to recreate the wheel, to deconstruct old formulas or blow up our expectations. Instead, it executes an old trope, simply and with no frills, and it does so really, really well. That’s what makes the movie great.

The trope at the center of To All the Boys is fake dating. It’s one of the most well-worn romantic conceits out there, in which circumstances conspire to lead two people to pretend to be in a relationship together, only to inevitably fall in love during the course of their subterfuge. In this case, the pair in question are 16-year-olds Lara Jean and Peter Kavinsky, and they are fake dating each other so that Lara Jean can get over a crush and Peter can get back at his ex.

Fake dating was beloved of teen movies during the genre’s golden age in the late ’90s — think Drive Me Crazy, She’s All That, and 10 Things I Hate About You — but since the death of the romantic comedy, it’s mostly become a marker for parody. In this decade, when a TV show has done an episode satirizing rom-com tropes, the way Community or Don’t Trust the B in Apartment 23 did over the course of their runs, those episodes have usually involved signposting a fake relationship. (“Wanna pretend you’re just going out with me on a bet?” asked Abed’s manic pixie dream girl love interest.)

With any trope so old and so well-known, the temptation to wink at it and subvert it is always present. But To All the Boys leaned into its fake dating premise with utter and relentless sincerity. In doing so, it created a kind of road map for how to get the most out of old romantic tropes without sliding into the trap of easy cynicism.

Fake dating is the have-your-cake-and-eat-it-too of romantic tropes. It grants audiences all the satisfaction of seeing the central couple in an established, domestic relationship, but it doesn’t deflate the will they/won’t they tension because you are always waiting for the two fake lovers to realize that they’re actually really in love. It’s a trope that lends itself equally well to both fluff and angst.

Accordingly, To All the Boys contains scene after scene of Lara Jean and Peter sharing their deepest hopes and dreams and desires with one another, and then reminding each other that their relationship is, of course, fake. “I could write you notes,” Peter says, gazing adoringly at Lara Jean, before he tells her that he’s only doing it to make his ex jealous. Lara Jean explains that she has issues with intimacy because of the death of her mother, before brightly pointing out that she doesn’t have to worry about that with Peter because “we’re just pretending.”

As a viewer, you are constantly pulled between sighing over the sweetness of their dynamic and longing for it to finally become “real.” It’s a state of delighted tenterhooks.

This movie lets its stars be true partners in crime

Some versions of the fake dating trope involve one partner tricking the other into the relationship. This is the am-I-a-fucking-bet subcategory of fake dating, the kind that was at the center of 10 Things I Hate About You and She’s All That, and while it retains the emotional power of the classic fake dating trope — when will Heath Ledger just get it together and admit that he’s actually in love with Julia Stiles? — the power dynamic is fundamentally uneven. (There’s a reason that when 10 Things was adapted into a TV show, the showrunners decided to nix the getting-paid-to-date-her storyline.) In this version of the trope, one of these people is getting fooled and the other one is fooling them. The entire love story is built around a betrayal. That makes it less fun.

In contrast, To All the Boys I’ve Loved Before has both Lara Jean and Peter enter their fake relationship with their eyes open. They sign a contract in which they make their expectations toward one another clear, and they make honesty and transparency a requirement of the contract.

That means there’s a tone of wacky complicity in the hijinks that ensue as they act out their plan. When they walk into the school cafeteria in slow motion, with Peter’s hand stuck absurdly in Lara Jean’s back pocket, they both know they are getting something over on the rest of the student body. They are on the same team. And because the basic emotional core of their relationship is based on friendship rather than betrayal, the audience can relax and sink into the fun of the story without getting distracted by pitying the character who’s being fooled.

Romantic comedies and their tropes are easy to mock, in part because these tropes were so omnipresent in so many bad romantic comedies 10 years ago, and in part because our culture loves to mock things associated with women. That’s why so many contemporary rom-coms include a knowing wink at the audience, so that everyone involved can feel that they are in on the joke — and to a certain extent, that they are above what they’re watching. Even Set It Up, the other great Netflix rom-com of the summer and in many ways a classic execution of the formula, made time for a meta joke about the classic “run to the airport” trope.

To All the Boys I’ve Loved Before is not here for your winking nonsense. This movie sees no reason that it should make a joke about how you have seen the fake dating trope before. It thinks it’s great that you are watching a rom-com. And perhaps most importantly, it does not secretly think that the conventions of this kind of storytelling are dumb, or that you need to be reassured that you’re smart even though you’re watching a girly teen flick. To All the Boys I’ve Loved Before does not apologize for the kind of movie it is.

That quiet assurance is what gives To All the Boys I’ve Loved Before its deeply earnest sincerity. It’s what gives you permission to wholeheartedly enjoy the romance of it all, without apologies or mockery. This is a movie that knows its tropes and loves them, and that is precisely what makes it great.