With “Lover,” Taylor Swift shows she can still write a perfect love song 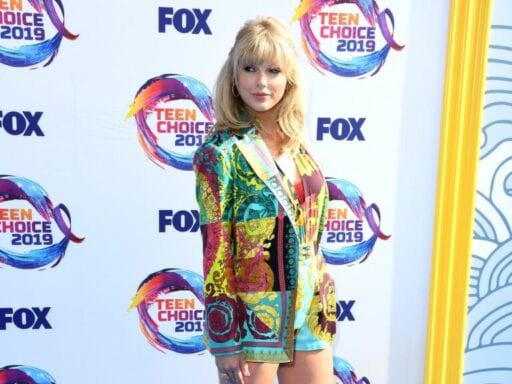 “Lover” is the first song Taylor Swift has written by herself since 2014’s “This Love.”

“Lover,” the title track from Taylor Swift’s forthcoming album, has dropped. And while Lover’s first two pop singles were met with a lukewarm critical reception (and a matching lukewarm track record on Billboard), “Lover” continues the trend started by the album’s third single, “The Archer,” released last month. It’s dreamier, slower, and more intimate than either “ME!” or “You Need to Calm Down,” and critics are appreciative. “Lover” is being greeted as a return to “the old Taylor”: country Taylor, sweet-acoustic-love-song Taylor, teardrops-on-her-guitar Taylor.

“Is this the new grown-up country Taylor we’ve been asking for?” asked the Telegraph.

“Lover” is “a laid-back love song that draws on her particular style of highly specific storytelling,” said Time, concluding that “Fans of earlier work like ‘All Too Well’ and ‘White Horse’ will be satisfied with this return to form.”

And part of why “Lover” feels like such a throwback might be that it’s the first Taylor Swift song on which Swift is the sole credited writer since 1989’s “This Love,” released back in 2014.

While Swift has a writing credit on most of her songs and made a point of writing every single track on her 2010 album Speak Now by herself, her last few albums have been collaboration-heavy. And since she transitioned away from country to pop five years ago with 1989, she’s tended to write most of her songs in partnership with either Max Martin or Jack Antonoff. On 2017’s Reputation, Swift doesn’t have a single solo writing credit.

Working with other songwriters doesn’t mean that Swift is a bad or inauthentic musician; most musicians work with collaborators all the time. But because Swift’s best songs tend to be both highly personal and highly specific, there is something unmistakeable about a song she crafted on her own: It feels emotionally honest and fresh in a way nothing else quite does.

After years without a Taylor Swift song written by Swift alone, “Lover” is a welcome reminder of what made Swift such an unstoppable force when she first emerged onto the music scene.

Why the coronavirus outbreak might be much bigger than we know
Star Wars: The Rise of Skywalker’s D23 trailer teases an “evil” Rey
First coronavirus death in the US reported in Washington state
Trump’s Georgia rally was supposed to pump up Loeffler and Perdue. It ended up being a grievance-fes...
The Today, Explained podcast team picks their favorite episodes
Trump’s dangerous “LIBERATE” tweets represent the views of a small minority