Why Spain is having yet another election 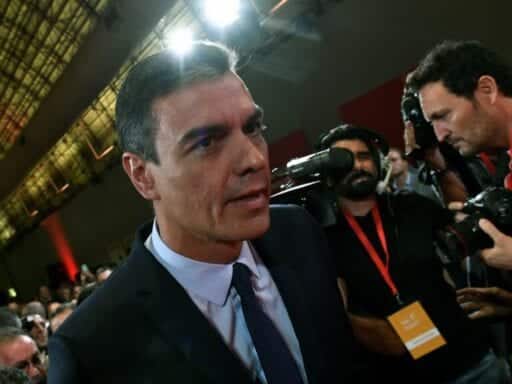 Pedro Sanchez and his center-left party won the most seats in April, but failed to form a government. Now, the country is headed back to the polls for the fourth time in four years.

The country just held national elections back in April. In that vote, Prime Minister Pedro Sánchez and his center-left Spanish Workers’ Socialist Party (PSOE) won the most seats. But they didn’t secure enough votes in Spain’s parliament for an outright majority, and needed the support of other parties to form a government.

Now, after months of trying and failing to put a government together, Sánchez conceded defeat ahead of the September 23 deadline. That sets the country up for another round of elections on November 10.

Sánchez told reporters Tuesday that he “had tried by all means available” to form a government but that the other political parties in Spain’s fractured political landscape “made it impossible for me.”

So now it’s back to the polls for Spanish voters for what will be the country’s fourth election in as many years. And there’s no guarantee the outcome of those elections will provide any more stability than the last round did.

A brief explanation of how Spain got to this point

In June 2018, Prime Minister Mariano Rajoy was ousted in a no-confidence vote after his party, the center-right Partido Popular (PP), became embroiled in a truly massive corruption scandal. This paved the way for Sánchez, of the PSOE, to become the current prime minister.

But Sánchez had to rely on a lot of smaller parties to oust Rajoy, including those representing the Basque country and Catalonia, two autonomous regions in Spain that have strong independence movements.

Sánchez’s support was extremely fragile to begin with, and it eventually crumbled when the Catalan parties and one Basque party — along with the opposition — rejected Sánchez’s budget in February 2019.

The prime minister called snap elections for April as the only way to possibly shore up power (the PSOE only had 84 seats in its 350-member legislature, called the Congress of Deputies) and break the impasse.

Those snap elections didn’t exactly break the deadlock. PSOE won 123 seats in those elections — but fell way short of the majority required to rule without support from other parties. The big question after the April vote: Which party would join Sánchez’s government?

Unidas Podemos, a coalition of leftist parties, seemed like the obvious choice. But talks failed over the summer between Unidas Podemos and PSOE over a battle over government ministers — which was really a fight about how large a role Unidas Podemos would have in any coalition government.

Besides Unidas Podemos, Sánchez didn’t have many other good options for a governing partner. Spain’s politics have traditionally been dominated by the two major political parties: the center-left PSOE and the center-right Partido Popular. But the political landscape began fragmenting more dramatically in the wake of the 2008 economic crisis and, more recently, the Catalonia independence referendum in 2017.

This has given rise to alternative parties like Unidas Podemos on the left, and on the right, Cuidadanos, a center-right party, and Vox, a far-right party that won 24 seats in Spain’s parliament in April’s elections. (And, yes, we’ve heard the jokes about the name before).

So though Sánchez didn’t have many other possible government partners, and discussions with Unidas Podemos mostly fell apart, Spain’s parliament still had a vote in July to see whether Sanchez had the support of parliament to be prime minister. He did not win it. That set a two-month countdown to try to secure the backing of Spain’s parliament for his premiership by September 23, or go back to the voters.

With that deadline approaching, Spain’s monarch, King Felipe VI, got involved. The king held talks this week to see if parliament finally could get behind one prime minister to lead a government ahead of an “investiture vote.” In Spain, the parliament just votes on whether they’re backing a specific prime minister, not the government.

But usually the best way to actually win that vote is to have the ability to form a government, and so have the votes in place to prevail. Since neither Sánchez nor anyone else had enough support, King Felipe VI concluded that there was no consensus on who could lead a government. Which meant elections were almost inevitable, even if technically the deadline is September 23.

So Spain — barring some true miracle — is headed for elections this fall. The question is whether that vote will be any more conclusive than the one just a few months ago. Spain’s political system isn’t well equipped to deal with the rise of these smaller parties, and it’s struggling to adapt to the divisions.

“The perception is that these parties, and I’d say especially the Socialist party since it actually has the most votes and it’s in charge of forming that coalition, are not taking coalition-forming very seriously,” Bécquer Seguín, an associate professor at Johns Hopkins University, told me.

“And that’s in part because they’ve never had to do this,” Seguín continued. “This is the first time modern Spanish history where you have more than two parties that are dominant in the political arena.”

Another question is whom voters might choose to blame for Spain’s political dysfunction.

Experts I spoke to said that, based on the current polling, it doesn’t look as if it will be PSOE, the center-left party. Indeed, November’s vote could end up a lot similar to the one in April, with PSOE likely still getting the most seats, and possibly even gaining a few more. But PSOE almost certainly won’t come away with the majority.

“I don’t think anybody’s expecting an earthquake election,” Bonnie Field, the global studies chair at Bentley University, told me from Barcelona, “but small changes can matter.”

Turnout could be a huge issue, as exasperation with the current politics might tamp down enthusiasm. As Fields pointed out, PSOE is already trying to rally support by promoting a “useful vote” — basically, vote for us, one party, and we’ll at least deliver government stability.

Whether that pitch will work after what just happened over the past few months is unclear. And quite a lot can change between now and November.

Spain, like other European countries are also dealing with fears of an economic downtown, made worse by the uncertainty of Brexit in the UK.

And within Spain, the sentences in the Catalonian separatists trials are expected this fall, which relate to the illegal independence referendum Catalonia held in 2017. Catalonia’s breakaway attempt helped instigate a resurgence in Spanish nationalism, which played into April’s elections. The conclusions of the trials might reignite the issue once again.

All of which means the status quo could easily be derailed by November. The question is whether this might produce a more decisive electoral outcome, or just muddle Spanish politics all the more.

3 winners and 4 losers from the final night of the Republican National Convention
The feud between Warren and Sanders supporters feels like 2016 all over again
A field hospital in Central Park: Tuesday’s coronavirus news
Why Pete Buttigieg is suddenly surging in the polls
What we know about the Health Department website cyberattack
The upside of a falling stock market