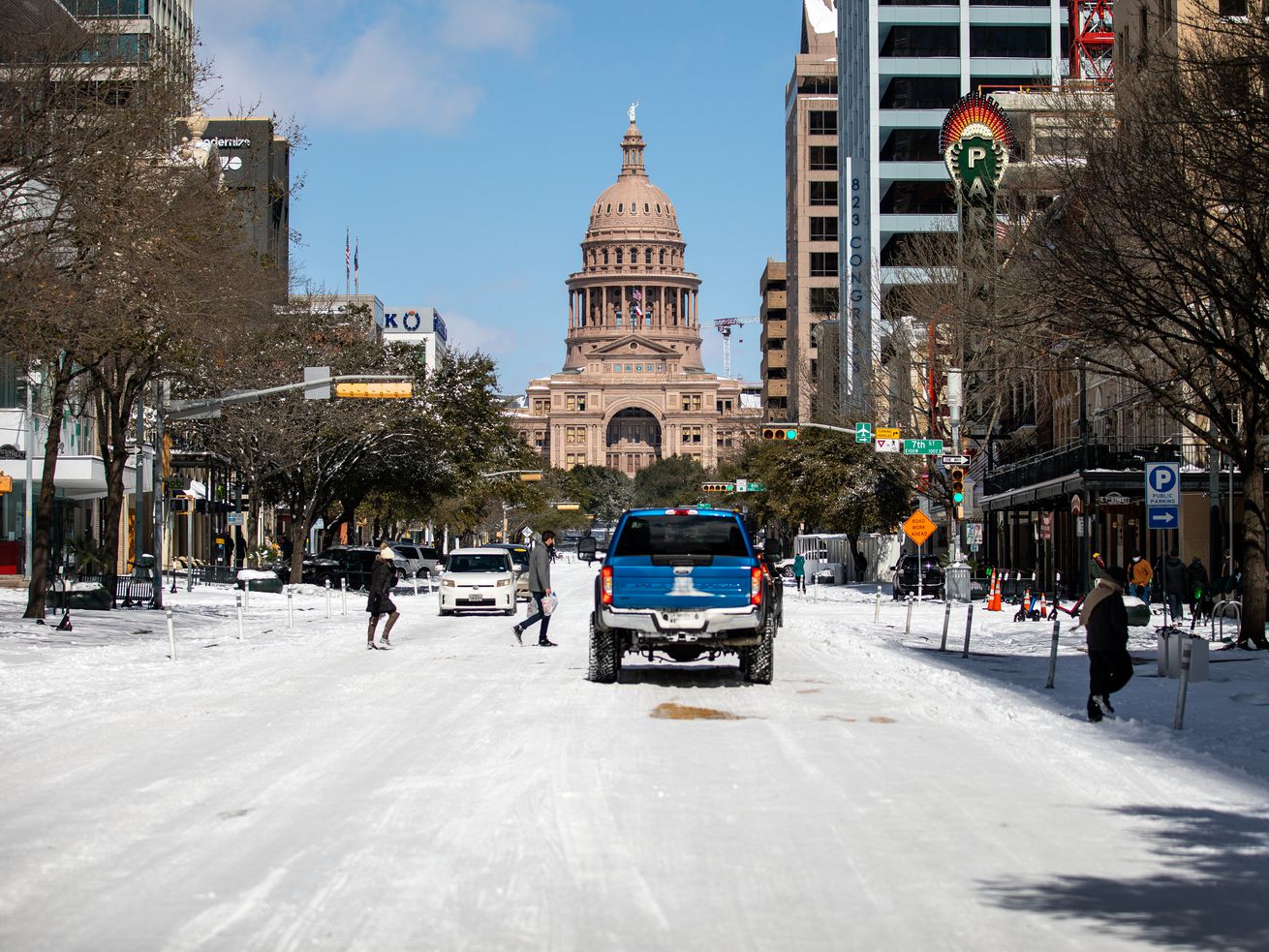 A sudden spike in energy demand and a loss of natural gas, coal, nuclear, and wind energy during a winter storm triggered blackouts across the state.

Winter Storm Uri chilled large areas of the western, central, and southern US over the weekend, straining the power grid in some places so badly that millions of Americans have had to go without power in temperatures below freezing.

The National Weather Service on Monday reported that 150 million Americans were under various winter storm warnings, with heavy snow and ice still likely to sweep from the Southern Plains, to the Ohio Valley, to the Northeast.

Thousands of utility customers in states like Louisiana and Mississippi suffered blackouts as ice knocked out power lines.

Texans, however, may be shivering more than others, with some of the coldest temperatures in 30 years, and some of the biggest power grid problems. More than 4.2 million customers had lost power as of Tuesday morning when temperatures dipped as low as 4 degrees Fahrenheit — lower than Anchorage, Alaska — in cities like Dallas. Flights were canceled out of Austin-Bergstrom International Airport. On Sunday, President Joe Biden approved a state of emergency declaration for Texas following a request from Gov. Greg Abbott.

For residents of the Lone Star State, the problem stems from both a record spike in electricity demand in a place that rarely gets this cold, as well as an unexpected drop in the supply of energy from natural gas, coal, wind, nuclear, and solar sources besieged by cold and ice.

This combination of shortfalls has forced power grid operators to conduct rolling blackouts, where power is shut off to different areas for a limited period of time. Local utilities are asking customers to conserve power and set their thermostats lower. For some customers, these blackouts aren’t rolling, instead stretching on for an unknown duration.

In Harris County, which includes the city of Houston, health workers scrambled to distribute Covid-19 vaccines as freezers lost power and backup generators failed. The county had to hurriedly administer 8,500 doses of the Covid-19 Moderna vaccine, which must be stored at temperatures between minus 5 and 13 degrees Fahrenheit.

Throughout the state, the National Guard has been deployed and 135 public warming centers have opened up to give people a respite from the frigid weather, although Covid-19 precautions remain in effect.

Texas’s grid crisis is a stark reminder that extreme weather events like Uri remains a threat to energy infrastructure across the country. There are, however, some unique factors in Texas that have put the state in such a precarious position. And with more frigid weather in store this week, Texans can’t come in from the cold just yet.

Unlike other states, Texas operates its own internal power grid that serves much of the state. Managed by the nonprofit Electric Reliability Council of Texas, or ERCOT, the grid provides 90 percent of the state’s electricity and serves 26 million customers.

It draws on a diverse range of power sources in a competitive market. The largest source of electricity in Texas is natural gas, followed by wind and solar, coal, then nuclear. The state is the largest oil, natural gas, and wind energy producer in the US.

The sudden cold snap this weekend put the state’s ample resources to the test, with demand reaching a record high peak for the winter, more than 69,000 megawatts. That’s 3,200 MW higher than the previous record set in 2018.

#ERCOT set a new winter peak demand record this evening, reaching 69,150 MW between 6 and 7 p.m. This is more than 3,200 MW higher than the previous winter peak set back in January 2018. Thanks to everyone who has been conserving today. We appreciate it! #conserve #saveenergy pic.twitter.com/eq56LLxcAS

As demand reached new heights, the supply of electricity fell drastically in the past few days, far below what operators expected. Ordinarily, ERCOT plans for winter to be much warmer and anticipates a lower energy demand. Power providers often schedule downtime and maintenance during the winter months to prepare for the massive annual surge in electricity demand in the hot Texas summer. The state’s ample wind and solar energy resources are also diminished in the winter, so ERCOT doesn’t depend on them to meet much of the demand they anticipate.

However, the cold itself posed a direct challenge to the power sources that the state was counting on. Wind turbines iced up. Coal piles froze.

The biggest shortfall in energy production stemmed from natural gas. Gas pipelines were blocked with ice or their compressors lost power. Much of the gas that was available was prioritized for heating homes and businesses rather than generating electricity. That’s helpful for people who use gas for heating but less so for those who use electric furnaces.

The Texas power grid has not been compromised.

The ability of some companies that generate the power has been frozen.

They are working to get generation back on line.

Wholesale natural gas prices, meanwhile, shot up as much as 4,000 percent. According to Bloomberg, electricity prices in northern Texas jumped to $300 per megawatt-hour, up from the average this month of $18 per megawatt-hour.

In total, about 34,000 megawatts of power generation in Texas went offline during the winter blast, more than 40 percent of peak winter demand. So even with a diverse range of energy sources, Texas was left scrounging for electrons in the bitter cold.

Many parts of the country suffer outages in extreme weather, but everything is bigger in Texas

The power grid is a complicated construct, but it becomes unstable when there is more energy demand than supply, which forces drastic actions like deliberate blackouts.

One question many Texans are asking is whether ERCOT should have seen a scenario like this coming and done more to prepare. ERCOT has historically been more worried about meeting peak summer demand, which can top 125,000 megawatts as hundreds of thousands of air conditioners switch on to cool during the summer heat.

However, Texas has faced cold snaps before, and the current winter storm was forecast days in advance.

ERCOT did do some modeling and planning ahead of this winter, but they used past winters as their benchmarks, which aren’t much help when the cold dips to record-breaking lows. “We studied a range of potential risks under both normal and extreme conditions, and believe there is sufficient generation to adequately serve our customers,” said Peter Warnken, manager of resource adequacy at ERCOT, in a report forecasting winter energy demand and supply in Texas.

The state was only expecting to lose about 8,600 megawatts in power generation over the winter, with a peak demand of roughly 58,000 megawatts. That forecast was far off the mark from the 34,000 megawatts that went offline and the peak of 69,000 megawatts in the recent winter storm.

Part of the problem may also be Texas’s go-it-alone approach to its electricity. “The Texas power grid is really an island,” said Daniel Cohan, an associate professor of environmental engineering at Rice University who has done modeling research on the state’s power systems. “Whatever happens in Texas stays in Texas.” While there are some interconnections between Texas and neighboring states, those power lines aren’t adequate to draw the power it would need to cope with such a massive shortfall.

Energy trading across states has helped cushion the blow of extreme cold in past winters, but it’s not clear that there would be much power available for Texans to buy from other states right now, as many are also coping with their own soaring energy demands and supply shortfalls.

The Texas blackouts may also be a symptom of a lack of proper upkeep. “The ERCOT grid has collapsed in exactly the same manner as the old Soviet Union,” Ed Hirs, an energy fellow in the Department of Economics at the University of Houston, told the Houston Chronicle. “It limped along on underinvestment and neglect until it finally broke under predictable circumstances.”

And Texas isn’t the only part of the country that has struggled to stay warm in chilly winters. In 2019, a winter storm swept across the Midwest and Northeast, with spikes in electricity demand and sudden drops in natural gas production that forced people to ration heat and reduce power use.

On the other end of the spectrum, California suffered rolling blackouts last summer as energy demand surged amid record-breaking heat. California utilities also shut off power to customers to prevent the ignition of wildfires when high winds picked up amid dry weather.

These events triggered by weather extremes can overwhelm energy systems, even for those that face such spikes and dips on a regular basis. It’s too reductive to blame any individual factor like intermittent renewable energy, fossil fuel generator shutdowns, decrepit infrastructure, or inadequate planning, though such events often become a political Rorschach test.

Rather, it’s a combination of multiple cascading failures that leaves millions of people in the dark. The hope now is that the power outages in Texas will provide important lessons and help avoid similar problems in the future. “I think this is an event that people are going to be looking back at for years,” Cohan said.

“I thought I was going to die”: AOC’s harrowing account of the Capitol Hill attack
Here’s the US military dog that helped take down ISIS leader Baghdadi
The emergency is happening right now
Miss Massachusetts contestant resigns her title over pageant’s #MeToo mockery
Your smart devices listening to you, explained
The many places you can buy Beyond Meat and Impossible Foods, in one chart