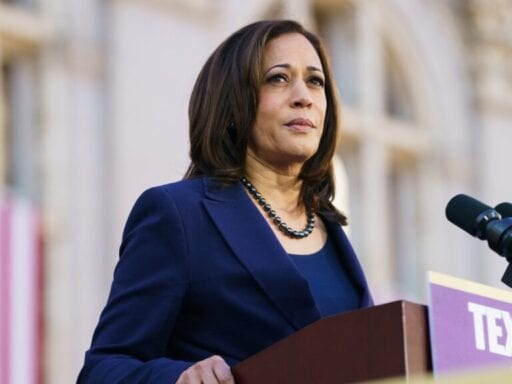 Why the former San Francisco mayor wrote about the newly declared presidential candidate.

Willie Brown, the former mayor of San Francisco, wrote a 137-word op-ed this weekend about Kamala Harris with the declaration, “Yes, we dated. It was more than 20 years ago.”

If you haven’t been following the intricacies of California politics, this might seem like a bizarre and out-of-the blue confession.

On the day Harris held her kickoff presidential campaign rally in Oakland, long-simmering chatter about her relationship with Brown surfaced. In the wake of Harris’s campaign announcement last week, Brown says he felt compelled to put out a statement about their relationship after getting “peppered” with media inquiries about it.

Brown’s statement, described as a blatant play for the “limelight” by the Nation’s Joan Walsh, has since prompted misogynistic attacks against Harris from the right and the left, with people accusing her of leveraging her relationship with Brown to get plum government appointments.

Brown’s op-ed does a little to preempt such attacks, noting that while he may have helped influence some aspects of Harris’s career, he also played a similar role for powerful California politicians including Gavin Newsom and Nancy Pelosi.

“Yes, I may have influenced her career by appointing her to two state commissions when I was Assembly speaker,” Brown wrote in the San Francisco Chronicle op-ed. “I certainly helped with her first race for district attorney in San Francisco. I have also helped the careers of House Speaker Nancy Pelosi, Gov. Gavin Newsom, Sen. Dianne Feinstein and a host of other politicians.”

The assertion that he influenced her career at all, however, puts him at the center of a slew of achievements that should be hers to own.

Harris and Brown dated briefly in the mid-1990s, after Brown had separated from his wife in 1981. They split up in 1995, according to the San Francisco Chronicle, and Harris went on to marry California-based lawyer Douglas Emhoff in 2014.

Her campaign did not provide a comment in response to the op-ed.

Interpreted charitably, Brown’s op-ed seems aimed at confronting critiques that Harris could face about their relationship, something she sought to distance herself from when she ran for San Francisco district attorney in 2003. Interpreted more cynically, it comes off as an attempt to give himself some credit for just how successful she’s become.

Who is Willie Brown and what are his ties to Kamala Harris?

Brown is a two-term mayor of San Francisco, who had also previously served for roughly 15 years as the speaker for California’s state Assembly. He’s a longtime giant in California politics and known for his overwhelming influence in the San Francisco political machine.

Brown’s relationship with Harris overlapped with his speakership in the mid-1990s, at which point Brown and his wife Blanche had been separated for more than a decade. While Fox News has sought to cast their pairing as an “extramarital relationship,” the San Francisco Chronicle notes that Brown had been “long-estranged” from his wife when he was with Harris. Harris was 29 when they met, while Brown was 60.

One of the key points of scrutiny related to their relationship has been the two jobs that Brown appointed Harris to around the time they were dating. One position was on the California Unemployment Insurance Appeals Board and the other was on the Medical Assistance Commission. Harris held both jobs in 1994, the same year she was linked with Brown, according to the Los Angeles Times. The two ultimately ended their relationship the following year.

When Harris ran for San Francisco district attorney in 2003, she knew that her relationship with Brown — and allegations of cronyism — would be raised as an issue despite the sexist nature of such critiques, Politico’s David Siders writes. “No woman likes to be judged by their relationships. We want to be judged by who we are, not who we are romantically involved with,” said Rebecca Prozan, Harris’s campaign chief.

As Siders notes, suggesting that Brown had any influence over Harris’s professional ascent obscures the fact that he broadly exerted the same influence over numerous politicians in the region, given his wide-ranging position of power.

“It is difficult to find any successful politician in San Francisco who does not have history with Brown,” writes Siders. “Before being elected mayor of San Francisco the same year Harris ran for district attorney, Newsom owed his start in San Francisco politics to an appointment by Brown to the city’s Parking and Traffic Commission, and later, to the San Francisco Board of Supervisors.”

It also gives Brown outsized credit for successes that Harris worked to achieve herself.

“Whether you agree or disagree with the system, I did the work,” Harris told SF Weekly during her 2003 DA run. “I refuse … to design my campaign around criticizing Willie Brown for the sake of appearing to be independent when I have no doubt that I am independent of him — and that he would probably right now express some fright about the fact that he cannot control me.”

Brown also contends that he played an important role in Harris’s election for district attorney, and while he’s been seen as having substantial involvement in the race, Refinery29’s Andrea Gonzalez-Ramirez notes that this influence is overstated:

While Brown claims he had a hand at electing her during her first district attorney bid, his role was much more limited. The former mayor donated $500 to the campaign and then had a political consultant raise money for her, even though she had not agreed to the pitch.

During her district attorney race, Harris explicitly said she’d have no issue prosecuting Brown, whose leadership in San Francisco had also been closely associated with allegations of corruption, referring to him as an “albatross hanging around my neck.”

“His career is over; I will be alive and kicking for the next 40 years. I do not owe him a thing,” she said at the time.

While Brown may have sought to preempt attacks on Harris with his op-ed, it’s also provided fodder for a slew of conservative websites that are levying misogynistic critiques of her credentials.

American Thinker and Red State are among the websites that have seized on the op-ed to suggest that Harris “slept her way to the top,” or that she received a boost from her relationship with Brown.

Lauren Steiner, a progressive activist, also posted (and quickly deleted) a tweet arguing that Harris did not date Brown for “love or physical attraction,” a statement for which she later apologized.

No worries, we save it for you. pic.twitter.com/9jdCkWXTYR

And NBC News’s Jonathan Allen notes that some Republicans and Democrats have suggested that Harris’s relationship with Brown could come up as a liability as the 2020 competition intensifies.

Both Republicans & Democrats have whispered “Willie Brown” to me in recent weeks when the subject of Harris’ run has come up. That’ll hurt her, they say. My analysis: The attack will backfire in a Dem primary for obvious reasons and won’t influence swing voters in a general. https://t.co/3AGbBfpy65

The purported attacks that have emerged so far don’t offer much in the way of substance, however. Instead, they appear to rely on lazy, misogynistic jabs that have little to do with Harris’s actual political achievements.

While Brown’s op-ed read more like an attention grab than a thoughtful response to possible critiques, its headline seems to sum up the takeaway about their relationship pretty well: “So what?”

Bobby Brown denies ever having hit Whitney Houston: “The public record is wrong”
Trump buys Saudi leader’s claim that he wasn’t involved in Jamal Khashoggi’s disappearance
Dwayne “The Rock” Johnson is not running for president in 2020. Good.
Julian Castro’s climate change plan would recognize a new class of refugees
Scarlett Johansson backs out of playing a transgender man after backlash
Trump’s association health plans are kind of a flop