Witches and monsters and ghosts, oh, my! Seven audio dramas with a touch of magic. 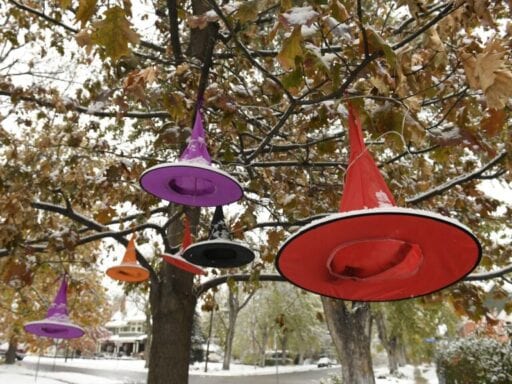 These fantasy podcast recs let you indulge your witchy side.

Whether it’s Halloween or you’re just in a witchy mood, sometimes what you want is a fun story with just a touch of magic — and no medium is better positioned to deliver on those kinds of fantastical tales than podcasts. The world of fiction podcasts, often referred to as audio dramas, has expanded in recent years to provide a wealth of ear-tingling stories.

If you’d like to be chilled to the bone this holiday, be sure to check out Vox’s horror podcast recommendations! But if you’re feeling ensorcelled, bewitched, spellbound, enchanted, possessed, like Bette Midler in Hocus Pocus — saucy but not too scary — this All Hallow’s Eve, then not to worry, we’ve still got you covered.

We’ve rounded up seven of our favorite magical podcasts to bring your ears the sounds of the occult, including urban and high fantasies, a touch of the Weird, and more.

This podcast bills itself as “a fantasy podcast about a witch juggling complex clients,” but it’s so much more than that. With a diverse cast of characters and lots of magical theory — the creator, Lisette Alvarez, has esoteric training — this rich podcast slowly and satisfyingly builds an entire world around its main character and her chaotic life.

Number of episodes so far: 27 in two complete seasons

Listen if you like: Alice Isn’t Dead, The Far Meridian

2) The Magical History of Knox County

This humorous fictional radio show blends the local lore of a place called Knox County with fantastical whimsy and the comic style of a skeptical host suddenly thrust into a land full of magic. This show is more properly a mystery, but one that slowly develops over time through careful foreshadowing and gradual world-building. It’s also short, which makes it a satisfying Halloween weekend binge.

Number of episodes so far: 8 in one complete season

Listen if you like: King Falls AM, Return Home

Equal parts urban fantasy and Victorian pastiche, Victoriocity is a madcap rollick through an alternate 19th-century London. A detective and a journalist untangle a convoluted conspiracy while interacting with charismatic characters in a landscape that mixes steampunk with touches of magical realism. Great sound design and marvelous acting make this a standout.

Number of episodes so far: 17, two seasons and four mini-episodes

Listen if you like: The Penumbra, Wooden Overcoats, The Mysterious Secrets Of Uncle Bertie’s Botanarium

Blending typical campus comedy with Lovecraftian horror and lots of guest writers including Knifepoint Horror’s Soren Narnia, the Alexandria Archives follow an amazingly deadpan college radio DJ as she gets to know her community of late-night callers and the scary tales they have to tell. Like Knox County, the larger story of this podcast builds over time as background details coalesce into an ongoing storyline and the DJ gets drawn further into the personal lives of her listeners.

Number of episodes so far: 37 in one complete series

Listen if you like: The Magnus Archives, Welcome to Night Vale

Written by a real-life couple, Love and Luck is something of an acquired taste, only because its steady slice-of-life look at a queer couple’s developing romance is so different from the typical audio drama format. But this romance is backgrounded in an alternate magical universe, one that keeps things surprising and lively, even as there’s something therapeutic about a plot that lets its OTP stay happy and in love.

Number of episodes so far: 100

Alba Salix is more properly three supplementary podcasts, but each can also stand alone. The Axe & Crown follows the adventures of a troll who runs a bustling fantasy tavern. The End of Time & Other Bothers is a side roleplaying podcast (think The Adventure Zone or Critical Role). The main, titular podcast is Alba Salix, Royal Physician, which centers around a beleaguered court physician as she navigates her zany fantasy world filled with familiar high fantasy tropes: court intrigues, dragons — and, oh, yeah, institutional sexism and racism.

Full of quirky characters and nods to roleplaying adventure games, Alba Salix is both serious and complex, but also frequently hilarious and particularly fun to listen to because of a delightfully dynamic cast.

Listen if you like: Hello from the Magic Tavern, The Adventure Zone

Okay, hear us out. This podcast is brand new — it launched just this month — and only two episodes are out so far. The framing is a bit kitsch: a family-friendly Australian talk radio network airing a deceptively bland relationship advice show. At a glance, it sounds like any other boring, bucolic advice show.

Except the first caller has a werewolf for a girlfriend.

That’s right. This is a call-in radio show where a “noted folklorist, sexologist, and relationship therapist“ gives advice on relationships and sexuality — in a world where monsters are real and “people’s needs, cultures, and bodies are radically different.” Let that sink in: This is a pansexual sex advice show for monsters.

The premise is played completely seriously, which takes some getting used to, but once you go with it, there’s something pretty refreshing about approaching sex through the lens of the supernatural. And who among us hasn’t wondered how ghosts have sex?

Listen if you like: Welcome to Night Vale, Here There Be Dragons

Beyoncé’s Lemonade is now available to stream on all major services
Trump says he’ll reopen the economy “based on a lot of facts and a lot of instincts”
Wall Street investors want Twitter CEO Jack Dorsey out. They might get their way.
Why the myth of a perfect meritocracy is so pernicious
The GOP plan to get Americans off food stamps puts 4 million children and seniors at risk
How to get your next coronavirus stimulus check, and other questions, answered