With Eighth Grade, Bo Burnham gives the selfie generation the portrait it deserves 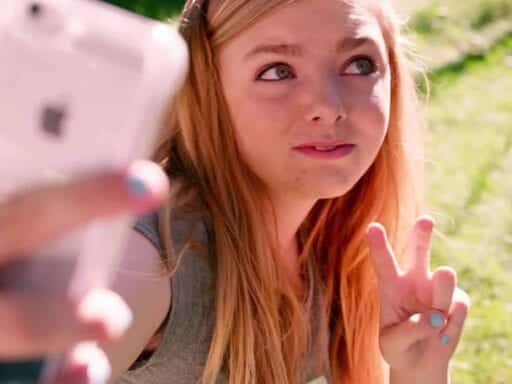 The popular YouTube comedian’s feature debut is an astonishingly sure-handed and sensitive tribute to the most awkward age.

Three beeps, and then a grainy camera image of a young girl, her face looking suspiciously airbrushed. “Hey, guys!” she says. “It’s Kayla, back with another video!”

In a rambling monologue laced with “ums” and “likes,” Kayla (Elsie Fisher) explains that the topic of this video is “being yourself,” which “can be hard” because it’s “not very easy.” She concludes with her signature sign-off — a hand signal and a peppy, if slightly mystifying “Gucci!” — and reaches forward to turn off the camera on her computer.

In almost any other film this would be the start of a condescending scene, one that’s meant to expose the vapidity of the Kids These Days and poke fun, especially, at teenage girls. But Eighth Grade is not that film. It’s written and directed by Bo Burnham, the wildly popular YouTube comedian — that phrase alone may turn you off, but stick with me here — and it is a startlingly empathetic, wincingly honest, and always completely charming story of a girl living out the last week of her eighth grade year and coming to terms with herself, at least a little.

Eighth Grade lit up Sundance when it premiered there earlier this year; it’s the sort of film that makes anyone who’s already out of their teenage years grateful that they don’t have to live them now. A sensitive movie about growing up surrounded by cameras you’re operating yourself, it’s the sort of story that probably had to be made by a filmmaker who knows that terrain intimately.

But eighth grade is eighth grade, no matter what generation you’re in. And that means that Eighth Grade is for all of us.

Today’s eighth graders aren’t millennials. Members of the ominously titled “Generation Z,” they’ve been using social media since they were kids (they don’t use Facebook, but are all over Instagram and Snapchat and YouTube) and are used to being both their own photographer and their own subject.

You could call them the “selfie” generation and make some facile analysis about narcissism, but that’s too easy. Everybody figures out who they are by watching how others react to them; that was just as true for our great-great grandparents as it is now. The difference is that those reactions have migrated to a more concrete form: likes, comments, and follows. You know exactly how many people think (or at least say they think) that you look good today, instead of trying to read it in their facial expressions, because Instagram will tell you. See me. Tell me I’m real.

That’s both terrifying and weirdly comforting, and it spills into real life. Eighth Grade captures well the feeling that everyone is looking at you and thinking about you, and the overwhelming desire to make yourself as attractive to their gaze as possible. Not necessarily sexually attractive — just cool enough to be liked by the people around you.

It’s not like adults don’t have that impulse. But for a lot of us it peaks right around age 13, which is also, unfortunately, when a lot of us are in peak awkward mode, just at the start of puberty.

Eighth Grade’s Kayla is right there, too. She lives with her father (Mark Day), who raised her after her mother left, when Kayla was very young. Besides her YouTube channel, Kayla maintains an active, filter-heavy Instagram presence; we see her carefully applying makeup and doing her hair with the aid of YouTube tutorials (too real, amirite), then getting back into bed and snapping a “just woke up like this” picture to post before she heads to school.

The film tracks the last week of Kayla’s eighth grade year, a week that turns out to be important for her. The class “superlatives” are announced — Kayla is voted “most quiet,” to her chagrin. The kids receive time capsules they made for themselves at the beginning of sixth grade. Kayla goes to a pool party hosted by the class’s coolest girl, Kennedy. She shadows a high school student named Olivia (Emily Robinson) through an entire school day and panics over what to wear when she’s invited to go to the mall with Olivia’s friends. She thirsts mightily after her class’s heartthrob, Aiden (Luke Prael). And she tries, with all her might, to feel like the thing she’s always wanted to be: the “coolest girl in the world.”

Eighth Grade gets social media intuitively, and doesn’t take the easy road out

All these things seem trivial from an adult perspective, but when you’re 13 they matter so, so very much. Eighth Grade gets that. It’s a very funny movie, but the audience laughs are more laughs of painful recognition than derision. Of course it’s funny that Aiden is, in reality, a scrawny and not particularly interesting kid, but who doesn’t look back at their teenaged crush with a raised eyebrow? Yes, watching Kayla step reluctantly onto the pool deck in her one-piece bathing suit, surrounded by a sea of girls in bikinis, is cringe-inducing, but it’s also bound to provoke a chuckle from anyone who remembers what it felt like to feel that different from everyone else.

Like other recent and upcoming films — Ingrid Goes West, Skate Kitchen — Eighth Grade gently probes the anxieties that come with a world in which online presences bleed into reality, and vice versa. On Instagram you can crop and filter and control your image. And while you know you’re doing that, there’s an impulse to believe that nobody else is. Everyone else’s skin and house and life is as perfect as it’s presented. It’s only you who’s a mess.

Adults should theoretically be able to make that separation in a healthy and productive manner, but at 13, all bets are off. So while Kayla is immensely excited by any indication that she’s actually being treated like the version of herself she projects to the world, she knows that’s not really her, and it’s almost too much to bear.

But Eighth Grade doesn’t do the boring thing, condemning social media for causing the problem. It knows there’s an upside, too. We see how being behind her camera also helps Kayla see that she is someone who’s funny and smart and could maybe even be confident. Some of that practicing to be cool might eventually bleed out into her real life.

And so Eighth Grade gets something extremely right about not just the selfie generation, but what it is to grow up today. Burnham deftly, almost miraculously evokes the awkwardness, the anxiety, the fears, and the small joys that are littered along the road to adulthood. It’s not like Kayla’s problems are fixed by the end; even her loving father can’t just wave a hand and make things better.

But eighth grade is only a year long. High school holds its own joys and terrors. So does college. So does adulthood. We’re all just trying to be ourselves.