Yes, we sometimes work against our short-term interests for long-term goals 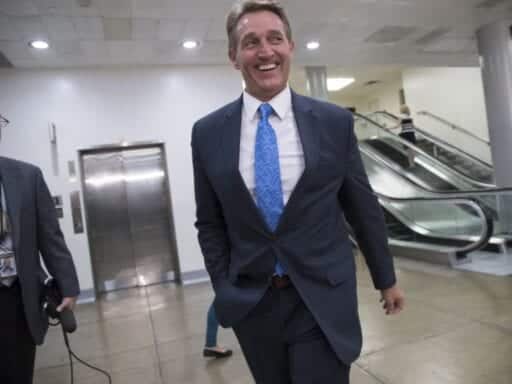 Republican leaders’ verbal pushback against Trump isn’t nothing, but it’s far short of what they could be doing.

Julia Azari and Perry Bacon Jr. have an important piece up at FiveThirtyEight this week about the sort of pushback President Trump has received from Republican congressional leaders. (The piece includes some very useful quotes from Matt Glassman, who has written on this topic previously.) As they note, yes, Republican resistance to Trump has been almost entirely verbal in nature, although this can still be important, and their warnings have likely constrained Trump to some extent. But I wanted to interrogate this piece a bit, particularly the comments in it from Sen. Jeff Flake (R-AZ).

Flake, of course, has been one of the most outspoken critics of Trump among Republican elected officials, and he clearly has heard some of the critiques of his verbal opposition. As he says in his interview in FiveThirtyEight:

To try to force the president to do something, what would you say? “We will hold up Kavanaugh, who we think is qualified, hold him up until the president stops being friends with Putin?”

Everyone says, “Republicans are voting with him 80 percent of the time.’ Ninety percent of what we do … we’re just filling positions. … The undersecretary for Africa was last week. Are we supposed to not staff the presidency at all? A lot of it is unrealistic expectations.

I’m a conservative. For people to expect me to not vote conservative … people last year were saying, “You said you’re against this president but you voted to repeal Obamacare.” I voted to repeal Obamacare 40 times [before the Senate vote last year]. “You disagree with this president but you voted for his tax cut.” We’ve been voting for tax cuts and tax reform before he came along, forever.

I certainly take Flake’s point. Statistics saying a Republican member of Congress is “voting with Trump” 80 percent of the time just aren’t very meaningful when that’s largely an agenda that the GOP set for itself and would have set regardless of which Republican sat in the White House. And it’s a very polarized era, so on most issues, nearly all Republicans will vote one way and nearly all Democrats will vote the other. And perhaps it’s unrealistic to expect Flake to vote against his ideological interests as a conservative.

Yet this is precisely the value of doing so. No, Trump doesn’t have a particularly well-developed congressional agenda, but there are clearly things he wants out of Congress, including confirmation of Supreme Court nominee Brett Kavanaugh and other federal judges, filling Cabinet and sub-Cabinet positions, and further rollbacks of the Affordable Care Act. It’s really not that surprising to see a Democrat voting against any of these things. For a conservative Republican to do so, or even to threaten to do so, would be notable.

Even one Republican in a 50-49 Senate has a great deal of leverage in this kind of a situation. This leverage could be used to secure protections for special counsel Robert Mueller’s investigative team, get Trump to remove Jared Kushner from the White House, enact full sanctions against Russia, suspend Trump’s Twitter account, or do any of the dozens of other things Republicans have indicated Trump should be doing.

Why might a Republican like Flake actually vote against his own ideological interests to generate such leverage? Because sacrificing short-term goals for long-term gain is what people do. When factory workers threaten to strike, they know that there are short-term risks — they could lose their jobs, or forgo some compensation, or be criticized heavily by people in their communities, or even be physically attacked. But they are sometimes willing to take a short-term hit to realize long-term gains like better pay, job security, or a safer work environment over their careers.

A married couple might want to spend all their disposable income on housing, restaurants, and travel. But they also recognize the value of setting aside some of that to save for their retirement and for their children’s college educations. So they leave some of their current preferences unfulfilled because they think long-term goals are important.

Daniel Ziblatt and Steven Levitsky’s book How Democracies Die is mostly pretty depressing, but it also includes a number of examples of parties around the globe resisting populist movements, even those that would have brought them short-term electoral gains, because they thought those movements posed long-term threats to democratic institutions. One example is the Swedish Conservative Party (AVF) during the 1930s:

The AVF’s youth group (an organization of voting-age activists), called the Swedish Nationalist Youth Organization, grew increasingly radical in the early 1930s, criticizing parliamentary democracy, openly supporting Hitler, and even creating a group of uniformed storm troopers. The AVF responded in 1933 by expelling the organization. The loss of 25,000 members may have cost the AVF votes in the 1934 municipal elections, but the party’s distancing strategy reduced the influence of antidemocratic forces in Sweden’s largest center-right party.

Flake himself has inveighed against Trump’s attacks on the free press, his campaign to undermine and discredit the Mueller investigation, and his “daily dissembling of our democratic institutions.”

It is no small thing for a senator of the president’s party to call out the president on such things publicly. But if the long-term health of our democratic institutions is more important than who holds a Cabinet position for the next year or two, then doesn’t it make sense for a senator to use his legislative leverage to protect it? Even if means voting against someone he thinks is qualified and with whom he agrees ideologically?

Indeed, wouldn’t a senator voting against his own interests for the health of the nation generate some great press and be a really strong note on which to end a career in public service?

The real danger to birds isn’t windmills — it’s cats and Trump
Pennsylvania lawmakers want to ban abortion before many people know they’re pregnant
The New York Times is the latest news outlet to end its Spanish-language coverage
The 2 different Covid-19 scenarios that worry experts
Mueller to Attorney General Barr: You “did not fully capture” my report
Mississippi’s ban on abortions at 15 weeks gets shut down second time