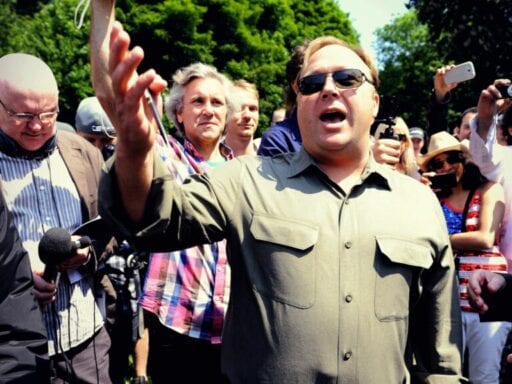 And why some on the right are calling it “collusion.”

In the past few days, Facebook, Apple, YouTube, and Spotify booted from their platforms podcasts, pages, and channels that belong to conspiracy theorist Alex Jones and his Infowars website — one of the biggest purges of popular content by internet giants in recent memory.

Jones and his various sites are leading purveyors of violent and sometimes racist (and anti-Semitic) conspiracy theories. The tech companies say they blocked Infowars not because of the conspiracy theories, but because, in Spotify’s words, Infowars “expressly and principally promotes, advocates, or incites hatred or violence against a group or individual based on characteristics.”

Facebook said they were shutting down several of Jones’s pages for “glorifying violence, which violates our graphic violence policy, and using dehumanizing language to describe people who are transgender, Muslims and immigrants, which violates our hate speech policies.” Apple said in a statement to BuzzFeed News, “Apple does not tolerate hate speech, and we have clear guidelines that creators and developers must follow to ensure we provide a safe environment for all of our users,” adding, “podcasts that violate these guidelines are removed from our directory.”

Jones set off a round of debate in recent weeks about whether Infowars should be granted carte blanche on big social media outlets when he addressed Russia investigation special counsel Robert Mueller on his show, imitated firing a gun, and said, “You’re going to get it, or I’m going to die trying.” (Facebook’s statement almost certainly is in response.)

The Infowars website gets as many as 10 million visitors a month, and Alex Jones’s YouTube channel has roughly 2.4 million subscribers, with 17 million views in the past 30 days.

Supporters of the ban on Jones — including the families of the victims of the Sandy Hook Elementary School shooting (Alex Jones has stated the tragedy never took place) — argue that the conspiracy theorist’s message constitutes a “societal crisis.” But his supporters, particularly those on the right, like Texas Sen. Ted Cruz, believe that limiting Jones’s online reach is an affront to free speech.

Alex Jones has been a leading voice in the conspiracy theorist corner of the internet for more than 20 years, spreading ideas such as “the government controls the weather” and “Hillary Clinton is a literal demon.” As my colleague Zack Beauchamp wrote in October 2016 on Jones’s views:

The US government is secretly controlled by a shadowy international cabal called the New World Order. The Federal Emergency Management Agency is going to put Americans in concentration camps. The “Jewish mafia” controls Uber and American health care. Barack Obama and Hillary Clinton are literal demons — like, the kind that come from hell and smell like sulfur. … Jones and those like him believe the world has been secretly taken over by a secret global cabal, the so-called “New World Order.” These “globalists,” as Jones types derisively call them, want to take over the United States, which they see as the final stronghold of freedom on Earth.

He was also one of the biggest pushers of the Pizzagate conspiracy theory, which eventually led a gunman to enter a Washington, DC, pizzeria and fire several shots.

On July 24, Jones issued a threat aimed at Robert Mueller on The Alex Jones Show:

Jones is a Donald Trump supporter and promoter. During the 2016 presidential campaign, Trump appeared on Jones’s show, saying Jones’s “reputation was amazing,” and Jones has repeatedly bragged that he is in close contact with the president.

Remember when then-candidate Trump went on Infowars and praised Alex Jones? “Your reputation is amazing,” Trump said. “I will not let you down.” pic.twitter.com/l9nt84xx81

In a statement on the decision to remove Jones’s content from its site, Facebook said that the company was not doing so because Jones was a conspiracy theorist, but because he was “glorifying violence” and “using dehumanizing language” against minorities:

As a result of reports we received, last week, we removed four videos on four Facebook Pages for violating our hate speech and bullying policies. These pages were the Alex Jones Channel Page, the Alex Jones Page, the InfoWars Page and the Infowars Nightly News Page. In addition, one of the admins of these Pages – Alex Jones – was placed in a 30-day block for his role in posting violating content to these Pages.

Since then, more content from the same Pages has been reported to us — upon review, we have taken it down for glorifying violence, which violates our graphic violence policy, and using dehumanizing language to describe people who are transgender, Muslims and immigrants, which violates our hate speech policies… While much of the discussion around Infowars has been related to false news, which is a serious issue that we are working to address by demoting links marked wrong by fact checkers and suggesting additional content, none of the violations that spurred today’s removals were related to this.

More recently, Jones has been embroiled in a series of lawsuits filed by people about whom he has made repeated false assertions, like Marcel Fontaine: Infowars declared him to be the shooter at Marjory Stoneman Douglas High School in Parkland, Florida (despite the fact that Fontaine had never even visited the state of Florida). There’s also Leonard Pozner, the father of a Sandy Hook victim, Noah Pozner, whose family has endured endless harassment by followers of Jones who believe that Pozner’s son never existed.

To be clear, this isn’t the first time Jones has been sued for making outrageous false statements. But now, supporters of his victims have started going after not just Jones but the platforms that host him and broadcast his messages — like Facebook.

A free speech issue — sort of

Fans and supporters of Alex Jones (not to mention Infowars employees, like Infowars editor-at-large Paul Joseph Watson) have responded to the decisions by Facebook, Apple, Spotify, and YouTube by alleging that by striking against Jones’s media outlets, “Big Tech” is engaged in “collusion” and “election meddling” and is putting free speech at risk.

Big Tech is engaging in election meddling and COLLUSION.

Whether you like @RealAlexJones and Infowars or not, he is undeniably the victim today of collusion by the big tech giants. What price free speech? https://t.co/DWroGYaWvk

WikiLeaks also chimed in, describing the ban as evidence of a “global anti-trust problem.”

Infowars says it has been banned by Facebook for unspecified ‘hate speech’. Regardless of the facts in this case, the ability of Facebook to censor rivial publishers is a global anti-trust problem, which along with San Francisco cultural imperialism, reduces political diversity. https://t.co/xb5oY2JHzy

And they have been joined by Sen. Cruz, who has repeatedly defended Jones’s right to speak freely on social media platforms while arguing that perhaps antitrust laws should be used to “break up” companies like Facebook. In his view, those who would shut down Alex Jones’s outlets might do the same to people or entities with more mainstream perspectives.

Am no fan of Jones — among other things he has a habit of repeatedly slandering my Dad by falsely and absurdly accusing him of killing JFK — but who the hell made Facebook the arbiter of political speech? Free speech includes views you disagree with. #1A https://t.co/RC5v4SHaiI

To be clear, Facebook, Spotify, YouTube, and Apple are all private companies, and legally have the right to ban any entity from their platforms, including Jones. As Marissa Lang wrote in the San Francisco Chronicle in August 2016:

As private companies, social networks are not required to adhere to the First Amendment. They set their own rules and retain the right to moderate content, routinely screening it for instances of gratuitous violence, harassment, profanity and other offensive material.

Facebook and other social media companies are not just massive corporations; they’re vehicles for millions of people to share their personal views and perspectives. Many observers believe that shutting out a specific entity because of their speech doesn’t bode well for them, or others, especially when “hate speech” is at issue. The rules determining what hate speech actually is are often vague at best. (For example, in 2017, several Facebook users reported having posts taken down that referenced the well-known LGBTQ-themed comic strip Dykes to Watch Out For.)

Alex Jones’s online popularity notwithstanding, it is unlikely that his fan base has the political firepower necessary to get his YouTube channel restored and his podcasts back on Spotify. But just as unlikely is an end anytime soon to the debate over who gets to say what on social media platforms, and how.

The case for raising kids in the city
No cops were charged with Breonna Taylor’s death. This is how the system was designed.
Facing a new coronavirus strain, the UK imposes a strict lockdown
The coronavirus could tear the EU apart
It’s nice to fantasize about a return to hugs and large gatherings. But is it healthy?
Pennsylvania’s naked ballot problem, explained