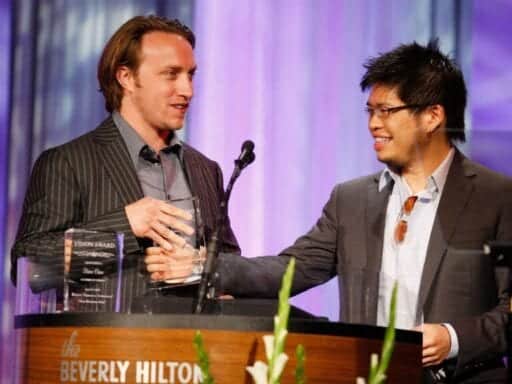 YouTube co-founders Chad Hurley and Steve Chen at an award presentation in 2008, two years after they sold their company to Google. | Vince Bucci/Getty Images

Influencers, giant TV companies, and everyone in between gets a cut.

There are lots of ways to think about YouTube.

Here’s one you probably haven’t thought of: YouTube is a company that distributes more than $7.5 billion a year to people who make and own media — a group that includes everyone from the biggest content conglomerates, to an influencer making gaming videos in his apartment.

That number comes, in a slightly roundabout way, from Alphabet’s earnings report on Tuesday. That’s because, for the first time, the holding company that owns YouTube released bare-bones financial information about the world’s largest video site, which it said generated $15 billion in ad revenue last year.

And the “majority” of that revenue, per Alphabet CFO Ruth Porat, gets paid out to creators. (As Ben Thompson points out, this change from zero disclosure to minimal disclosure is likely the result of changes to Alphabet’s organizational structure, and an attempt to head off a potential problem with US regulators. When Larry Page was CEO of Alphabet, the company told the US Securities and Exchange Commission that it didn’t have to release YouTube numbers because Page didn’t see them. Now that Sundar Pichai is CEO, Alphabet can’t make that argument.).

If you’re someone who doesn’t think about YouTube’s business, or thinks about it primarily as a money-hovering machine, that number may surprise you. But it shouldn’t.

While YouTube has been quiet about the financials that power the company, it has been fairly open about its business model, which came into place in its earliest years: It lets other people upload videos on the site, shows ads to people who watch those videos, and then gives more than half the ad money it makes from those viewing sessions back to the people who put the videos there.

The company eventually extended that model to (basically) all YouTube users in 2012; the general model is that YouTube gives 55 cents of each ad dollar back to the person who made or owns the video, and keeps the rest for itself. (More recently, in response to criticism about extremist content on the site, it has tightened restrictions about who it will share money with.)

But that same structure has also allowed YouTube to grow at an astonishing pace. In 2006, when Google bought the site for $1.65 billion, YouTube’s users uploaded 2.1 million clips in a month; now they are uploading some 500 hours of content every minute. Its business is skyrocketing, too: The $15 billion YouTube took in in 2019 is up more than 85 percent from two years earlier, when it took in $8.1 billion.

(Since YouTube has now extended its business beyond its free, ad-based model, its total revenue is even bigger: It is now earning another $3 billion a year selling subscriptions to services like pay TV and a music streaming offering).

Those numbers also illustrate why YouTube’s leaders are unlikely to make meaningful changes to the company’s core operations: For every article or tweet you see complaining about YouTube’s problems — and, again, YouTube has very real problems — it works very, very well for all kinds of users, advertisers, and content makers.

It’s also worth keeping in mind that when you hear content companies — like, for instance, Comcast (Comcast is an investor in Vox Media, which owns this site) — complain about not getting paid for the stuff they put on the internet, they tend to complain more loudly about Facebook than Google — or, at least YouTube. They have at least 7.5 billion reasons for that.