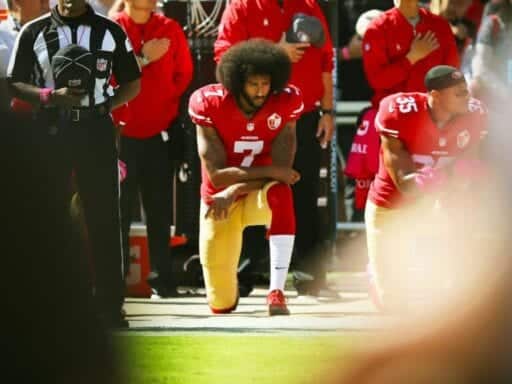 Why a protest against racial injustice became a political hot potato.

Colin Kaepernick hasn’t played a down of professional football since January 1, 2017 (a home loss to the Seattle Seahawks). But he’s become a powerful (and divisive) symbol — an inspiration for hundreds of other NFL players who have continued to kneel in protest of racial inequality during the anthem, and, most recently the face of Nike’s “Just Do It” campaign in 2018.

The tagline for the Nike campaign: “Believe in something. Even if it means losing everything.”

Kaepernick’s protest started quietly. On August 14, 2016, when he was the backup San Francisco 49ers quarterback, he sat during the national anthem before a preseason exhibition game against the Houston Texans. No one noticed. At first.

But two years later, the controversy that started with Kaepernick has enmeshed the country’s most popular sports league — one whose 32 teams are worth roughly $75 billion, more than the MLB and the NBA combined — in a political and cultural firestorm it most definitely did not want.

It has put the NFL — already facing other challenges, including a concussion crisis that could impact the way the sport is played at a fundamental level — in an almost impossible quandary that appears far from resolution with the regular season opener just days away.

On one side: NFL players, who want to be able to speak out on issues of importance to them just like athletes have in other sports. On the other: the president of the United States, who wants nothing more than to continue to stoke a culture war fire that he believes can only benefit him politically.

As the anthem protests expanded, so did the backlash

The anthem protests began with Colin Kaepernick, who first sat during the anthem and then knelt, after speaking with a former NFL player who had served as a Green Beret. He said he did so in response to police-involved shootings aimed at unarmed black Americans and the rise of the Black Lives Matter movement, stating, “I am not going to stand up to show pride in a flag for a country that oppresses black people and people of color,” a reasoning he expounded on on August 28, 2017:

Other players from across the NFL began to join the protest as the regular season began — in total, about 200 players have either knelt or sat during the national anthem since the protests began in August 2016. And so did athletes from other sports, like professional women’s soccer player Megan Rapinoe. Even some high school football teams began to kneel during the anthem. Though the NFL didn’t even have players on the field for the national anthem before 2009 (and the anthem is traditionally not a part of the television broadcast shown to fans at home), the issue became a lightning rod for discussions about race, inequality, and police brutality.

And while the protests began before Trump’s electoral victory in November 2016, Trump became part of the reasoning behind some NFL players’ decision to protest, particularly after white nationalists marched in Charlottesville, Virginia, only to be referred to by Trump as “very fine people.” In a New York Times op-ed, then-San Francisco 49ers linebacker Eric Reid wrote:

I have too often seen our efforts belittled with statements like “He should have listened to the officer,” after watching an unarmed black person get shot, or “There is no such thing as white privilege” and “Racism ended years ago.” We know that racism and white privilege are both very much alive today.

And it’s disheartening and infuriating that President Trump has referred to us with slurs but the neo-Nazis in Charlottesville, Va., as “very fine people.” His remarks are a clear attempt to deepen the rift that we’ve tried so hard to mend.

But though some conservatives viewed Kaepernick’s protest as an expression of free speech, many on the right didn’t see it that way, seeing the protests as an example of the “politicization of sports” or “symbolic of how liberalism has been allowed to spread unchecked through our culture,” and, most importantly, indicative of anti-Americanism run amok, as NFL players “disrespected” the American flag and veterans of the wars fought to protect it. In October 2017, Vice President Mike Pence left a 49ers/Indianapolis Colts game when members of the 49ers knelt during the anthem. And some conservatives urged a boycott of NFL games in response:

Encourage this movement every way you can. Start by skipping the next game. Then LET PEOPLE KNOW that you’re not watching and WHY you’re not watching. Stop buying their merchandise. Trash them publicly for being unpatriotic and disrespectful to America. Hit them where it hurts, in the wallet. If you’re sick and tired of the way NFL players are behaving, that’s how you can change it. If you love football, no one’s saying it has to be forever. If the NFL does the right thing and starts putting heavy fines on players that disrespect America, feel free to tune back in. But, in the interim, if you want things to change, YOU have to be willing to change your behavior. As for me? I’m not watching a game this year, including the Super Bowl and you know what? I’m not going to miss it one iota. Not every conservative will join me in doing that, but if enough conservatives decide they’ve had it with football and turn the TV off, the NFL will change in a hurry.

The Republican National Committee even used the issue as a fundraiser, sending emails to constituents stating, “When the national anthem plays, President Trump proudly stands and places his hand over his heart out of respect for our flag, our country, and our heroes.” (Interestingly, President Trump also has referred to America as a “hellhole.”)

How the NFL works — for owners

To understand what made the national anthem controversy — and the resulting potential boycotts — such a hot-button target, it’s important to understand a bit more about how the NFL works.

There are 32 NFL teams, with 53 active players on each team, for a total of 1,696 NFL players active at a time. The average NFL salary is $2.1 million, below both the NBA and Major League Baseball (but still pretty significant.)

But the players don’t hold the power in the NFL. NFL players have fewer bargaining rights than athletes in other major sports, while facing a significantly shorter career length than those playing other sports (about 3.3 years on average). NFL players, unlike athletes in other sports, do not have fully guaranteed contracts, meaning that a player could sign a five-year deal for a certain amount of money and potentially not receive the vast bulk of the agreed-upon salary. Allegedly, this is because of the NFL’s high injury risk, and the idea that players might not play as hard if they know their salary is guaranteed (though other sports where players face injury don’t do this).

In the NFL, the real power lies with team owners, like the Dallas Cowboys’ Jerry Jones, the New England Patriots’ Robert Kraft, and the Miami Dolphins’ Stephen Ross. In fact, the NFL’s 10 richest owners are worth a combined $61 billion. In a league that is roughly 70 percent black, all but two NFL owners are white. NFL owners are beholden not to their players but to fans, who spend money in the stadiums (which were often built with taxpayer money) and watch the games on television, where advertising dollars have raised league profits to record heights.

No wonder, then, that in the face of continued Trump tweets and commentary from Republicans and others about the national anthem protests, the protesting players got little support from team owners like Houston Texans owner Bob McNair, who compared protesting players to “inmates running the prison,” or from NFL Commissioner Roger Goodell, who sent a letter to team owners in October 2017 saying, “Like many of our fans, we believe that everyone should stand for the national anthem.” That same month, Dallas Cowboys owner Jerry Jones said any player who protested would be benched, and Trump tweeted his approval.

A big salute to Jerry Jones, owner of the Dallas Cowboys, who will BENCH players who disrespect our Flag.”Stand for Anthem or sit for game!”

Complicated, with no ending in sight

Now, with the NFL regular season just days away, the NFL owners and players are still battling over the protests. It’s far from the league’s only problem: It’s in the midst of concerns over cord-cutting (fewer Americans watching ESPN, CBS, and NBC NFL broadcasts on television), head injuries, and other problems. The league wants the anthem issue resolved, for good.

In May, the NFL and the owners agreed to a policy in which players would be expected to stand for the anthem if they were on the sidelines but were given the option of remaining in the locker room instead, with fines levied by the NFL for any protests.

Though it was intended to be a compromise solution, the deal didn’t make the players — or Trump — happy, with Trump tweeting two months later that players who kneel twice should be banned for the season without pay (though he praised the decision in May while adding that “maybe” protesting players shouldn’t be in the country). One Republican Congress member even compared kneeling during the anthem to Nazi salutes when he learned that the owner of the New York Jets might pay players’ fines for kneeling.

Meanwhile, NFL players who just wanted to go back to the pre-2009 system — where players stayed in the locker room for the national anthem — filed a grievance with the league via the NFL players union.

Many NFL players want to find a way to settle the issue — as do NFL owners and the league itself. “We need to go into this thing with an open mind, both sides, not so polarized,” Buffalo Bills linebacker Lorenzo Alexander, a member of the NFL players union’s ruling executive committee, told the Washington Post in July. And one NFL owner told SB Nation’s Thomas George, “We are going to do more with [players] in their causes and in our communities. We listened to our fans who want the anthem and the flag respected. There is room for all of us to get along and keep the game healthy — the right way.”

But one important figure doesn’t want the issue settled: President Trump, who believes, as he reportedly told Cowboys owner Jerry Jones, “Tell everybody, you can’t win this one. … This one lifts me.” To Trump, there are “bad” race-related controversies for him to engage in — his reaction to the alt-right rally in Charlottesville, for example. But there are also “good” ones, like putting himself on the side of patriotism and the American flag, and in opposition to “ungrateful” NFL players, many of whom have earned millions of dollars in the NFL (and most of whom are black).

A détente that would end the stalemate can only happen when all sides agree that an agreement not only could be reached, but should be achieved. And clearly, Trump doesn’t agree, believing that continuing to hammer on the issue (and on professional athletes in general) is not just important but also smart politics. And until he believes otherwise, the NFL anthem controversy will not go away.

The stakes of Harvey Weinstein’s trial, explained
The Kentucky Kroger shooting may have been a racist attack
Registered to vote? Here are the voter registration deadlines in all 50 states.
Beyond Meat and Pepsi are teaming up to make plant-based snacks and drinks
Ask a book critic: I want a captivating novel that won’t make me think too much
Why the US and Iran are fighting over this tiny waterway