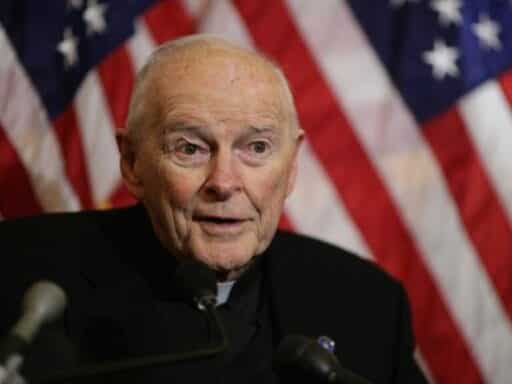 Everybody in James’s family called him “Uncle Teddy.”

Father Theodore McCarrick was a New Jersey priest, whose charisma and intelligence had already set him on a clear course to rise in the Catholic ecclesiastical hierarchy. But at age 11, to James, whose story the New York Times reported last week (using only his first name), “Teddy” was a close family friend, an advisor, and a mentor.

Since then, McCarrick’s career continued to rise. In 1986, Father McCarrick became the Archbishop of Newark. In 2000, he became the Archbishop of Washington, DC, a particularly prestigious post. In 2001, he was promoted to cardinal, elevating him to the very highest ranks of Vatican officials. Even after his retirement in 2006 (archbishops must take mandatory retirement at the age of 75), McCarrick, now 88 remained a valued and vocal member of the Catholic community, often representing the Catholic perspective in global policy debate.

But on Friday, Pope Francis accepted McCarrick’s resignation from the college of cardinals over allegations that he had sexually harassed and abused both minors and young seminarians over the past several decades. According to a statement released by the Vatican, McCarrick has been instructed to live out a “life of prayer and penance,” and will have to remain in seclusion pending an ecclesiastical trial. A resignation by a cardinal is exceedingly rare. The New York Times reports that the last time a cardinal resigned was in 1927, over political disagreements with the Vatican, suggesting that the Vatican is taking the allegations of McCarrick’s abuse seriously.

Last month, McCarrick was removed from ministry over the allegation that he had abused an unnamed 16-year-old altar boy in 1971. A preliminary Vatican investigation found the allegation to be credible. He currently faces no criminal charges, because the alleged acts are beyond the statute of limitations.

It’s unclear exactly how many people McCarrick is alleged to have abused or harassed in total. The archdiocese of New Jersey settled with two alleged adult victims, who were both seminarians under his tutelage. Victims’ statements in the settlement documents attest to McCarrick’s habitual sexual relationships with multiple seminarians. Currently, the altar boy from the 1971 incident and James are the only two accusers who were minors at the time of the alleged abuse.

What makes the McCarrick case particularly striking is the degree to which his sexual harassment of adult seminarians (not his abuse of minors) appears to have gone largely unchecked despite documented complaints. And despite widespread awareness of his behavior, McCarrick advanced to the highest echelons of the Catholic hierarchy. Action against McCarrick appears to have only been taken once his child victims came forward.

“Someone, or indeed many someones, needs to be held accountable for this disaster,” Catholic commentator Ross Douthat wrote in the New York Times earlier this week, “And that accountability requires more than self-exculpating statements from the cardinals involved. It requires judgment — which requires more certain knowledge — which requires investigation — which probably requires an investigator with a mandate from the pope himself.”

According to the New York Times, which reported on McCarrick last week, two separate New Jersey dioceses paid settlements to adult victims, in 2005 and 2007, over allegations against McCarrick. Robert Ciolek, who received one of the settlements, told reporters that, throughout the 1980s, when McCarrick was the Bishop of Metuchen, New Jersey, he would frequently take seminarians to his beach house, during which one student would be chosen to share a bed with McCarrick. In bed, McCarrick would massage their shoulders, or otherwise engage in unwanted touching. A second seminarian, who asked not to be named in the Times, described not only explicit sexual contact with McCarrick, but also witnessing McCarrick frequently engaged in sexual behavior with other seminarians and priests under his authority.

“My observations were that people were disgusted by it,” Ciolek told the Times. “There were some who gloried in the attention it brought on them, even if it was screwed-up attention. But I don’t remember anyone welcoming it and hoping they would be touched.”

By all accounts, McCarrick’s behavior — with adult seminarians, if not with minors — seems to have been widely known at the top of the church hierarchy, even as McCarrick continued to progress in the ranks. In 1994, one of the priests who would later receive a settlement wrote to Edward Hughes, then bishop of Metuchen, McCarrick’s old post, recounting McCarrick’s earlier abuse. That unnamed priest, who then also faced accusations of abusing teenagers, was given therapy and transferred. No action against McCarrick appears to have been taken.

That same year, the Times reports, another religious brother, Robert Hoatson, expressed concerns to an unnamed official in the diocese of Newark about rumors he had heard about McCarrick’s behavior with seminarians. At that point, McCarrick was archbishop. According to Hoatson, the official appeared to confirm the rumors’ veracity, saying “Oh no, that ended.” He claimed McCarrick had ceased his abusive behavior after being asked by Bishop James McHugh, an auxiliary bishop at the time, and by the papal nuncio (Vatican officials who function like an ambassador).

On several occasions, priests and Catholic laypersons contacted the Vatican directly to express their concerns about McCarrick’s behavior with his seminarians. In 2000, before McCarrick’s promotion to the Archdiocese of Washington, a concerned bishop, Father Boniface Ramsey contacted the papal nuncio, Archbishop Gabriel Montalvo, directly. He said he received no reply to his letter. Again, no direct action was taken against McCarrick.

A number of journalists, including the American Conservative’s Rod Dreher and GetReligion’s Julia Duin, say they have written about attempting to report on McCarrick’s behavior in the early 2000s only to run up against a series of obstacles.

Dreher told Vox about another effort by prominent Catholic leaders to alert the church to McCarrick’s behavior in advance of his nomination to the Diocese of Washington. As Dreher told me in an email, two well-known Catholic laymen had gone to Rome in 2000 to warn the Vatican directly about McCarrick’s treatment of seminarians and young priests.

“I phoned the first of the two men. He confirmed that he had been on this trip, but wouldn’t talk about it,” Dreher, who was writing for the New York Post at the time, told Vox. “When I called the second, he said [referencing a story in the Biblical book of Genesis], ‘If that were true, I wouldn’t tell you for the same reason Noah’s sons covered their father in his drunkenness.’ In other words,” Dreher adds, “he believed that loyalty to the institution required him to cover up for McCarrick.”

Julia Duin has written publicly about what she saw as the persistent threat of lawsuit from the Church, which rendered some of her editors at the Washington Times excessively cautious in encouraging her to go after the story.

In his conversation with Vox, Dreher also highlighted what he believed to be a reluctance on the part of newspapers he worked for to pursue stories about McCarrick. He believes that some of this reluctance was due to “fear of giving aid and comfort to anti-gay bigots” by appearing to criticize behavior that, at that time, might have been perceived as consensual since it was between two adults.

But perhaps the biggest obstacle to bringing McCarrick’s actions to light was the reticence of victims themselves to come forward or go on the record: a point both Duin and Dreher raised.

According to Father James Martin, SJ, an author and Jesuit priest, one of the most difficult parts about seeking accountability for McCarrick’s actions with adults is that these seminarians and young priests remain professionally, spiritually, and financially beholden to the Catholic Church, which may make them reluctant to come forward, even while the wider Catholic child sex abuse scandals rocked the church.

“In the corporate world,” Martin told Vox, “let’s say the harassment happened 10 years ago — the person’s in another company now, right? Well, if you’re still a priest, you’re still in the in the archdiocese, for example. You’re afraid to come out against someone who is so powerful. You wonder what’s going to happen. Will you be labeled as a complainer, a storyteller? So I think that’s very difficult for people.”

Only after the revelations that McCarrick had allegedly abused the 16-year-old became public did McCarrick’s adult accusers go public.

According to Martin, multiple factors contributed to McCarrick’s ability to operate with impunity for so long. For starters, there was the unwillingness of any of his alleged victims — minor or adult — to go directly on the record, out of fear of losing their jobs and careers. In addition, he says, within church culture, McCarrick’s alleged harassment — especially because it was of adults — was not necessarily seen as meriting immediate punishment.

As Martin puts it, “This [kind of harassment] was often seen as a moral problem, right? Not a sickness or a crime. And so there was this, you know, sort of misplaced emphasis on forgiveness [rather than punishment].”

Pope Francis’s response to the McCarrick scandal is heartening

Initial responses to the allegations against McCarrick seemed to place the blame for McCarrick’s continued career advancement, at least in part, on procedural failings in the ecclesiastical system. A parish priest can easily be removed from ministry, but the process of disciplining a senior member like a cardinal, bishop or an archbishop is much more difficult.

In an open letter released earlier this week, Cardinal Sean O’Malley of Boston wrote, “While the Church in the United States has adopted a zero tolerance policy regarding the sexual abuse of minors by priests we must have clearer procedures for cases involving bishops. Transparent and consistent protocols are needed to provide justice for the victims and to adequately respond to the legitimate indignation of the community.”

Pope Francis’s response to the McCarrick case has been direct. McCarrick has been functionally stripped of his status as cardinal, and will remain in seclusion pending trial. The response suggests that Francis intends to make an example of McCarrick, and signal a much more robust policy against sexual offenders of all ranks.

Pope Francis has not spoken directly on McCarrick’s case. But while Pope Francis has been criticized in the past for his insufficient handling of child sex abuse cases, in recent months he has been taking a more active role in combatting clerical sex abuse more widely. In May, for example, every single bishop in Chile resigned after a contentious summit with Francis, during which Francis made it clear that he held the entire community accountable for covering up child sex offenses there.