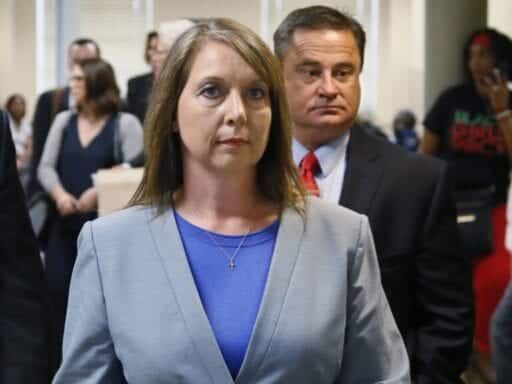 Protesters are angry that Betty Shelby is teaching the course two years after shooting Terence Crutcher.

The police officer who fatally shot an unarmed man in Tulsa, Oklahoma, two years ago is now teaching other officers how to handle the aftermath of police shootings and other “critical incidents.”

Betty Shelby — now a deputy with the nearby Rogers County Sheriff’s Department — taught a course at the Tulsa County Sheriff’s Office on Tuesday called “Surviving the Aftermath of a Critical Incident.” According to a state website, the course exposes officers to “many of the legal, financial, physical, and emotional challenges which may result from” situations like police shootings. The four-hour class, which is free for officers to attend, has been certified by Oklahoma’s Council on Law Enforcement Education and Training and counts toward two hours of mental health training for police officers.

Shelby first told Tulsa’s local ABC affiliate in May that she was teaching the class around the state. She said a main lesson she teaches officers is how to handle the “Ferguson effect,” a phenomenon that refers to the 2014 police shooting of Michael Brown in Ferguson, Missouri. The term has been controversially used to refer to the belief that police officers have become fearful to do their jobs in the wake of community criticism after police shootings, and that this reduced policing has led to a rise in violent crime. Shelby describes it as something a bit different, arguing that it’s “when a police officer is victimized by anti-police groups and tried in the court of public opinion.”

But this week, Shelby taught the class in Tulsa, where she previously worked and fatally shot Terence Crutcher in 2016. The news attracted a heavy amount of criticism from Tulsa’s black residents. On Monday, activists, members of Crutcher’s family, and community members protested Shelby’s class, arguing that the officer was being given a platform that Crutcher’s family was not.

“It’s one more indication that Betty Shelby has been rewarded while Terence Crutcher’s children are suffering still,” Marq Lewis, the founder of the local community group We the People Oklahoma, said in an interview with the Washington Post. “They don’t have anyone going around the state talking about their experiences.”

Shelby, though, defends her course. “I faced many challenges that I was unprepared for such as threats to my life by activists groups to loss of pay,” she said in a statement on Monday evening. “My class is to help others by sharing some of the skills I used to cope with the stress of my critical incident.”

While Crutcher’s shooting was the catalyst for Shelby teaching the class, the officer said the shooting would not be discussed.

The controversy surrounding Shelby and her course calls attention to complicated issues often left unaddressed in the wake of police shootings of black men and women, particularly when it comes to who gets to control the narrative of a police shooting. And for Oklahoma, which has found itself at the center of a national conversation on race and policing at several points in the past few years, the controversy is also reigniting debates over racial issues that have plagued the state for decades.

On September 18, 2016, Tulsa police officers were responding to a call when they spotted Terence Crutcher’s stalled car in the middle of the road.

Videos of the incident captured by a police helicopter and a dashboard camera do not show how the officers initiated their interactions with Crutcher, but begin with Crutcher being directed by officers. Crutcher’s hands are raised as he follows instructions, walking toward the front of his car. But as he stands beside the car window, in a moment that was largely obscured by cameras in videos released by the Tulsa Police Department, two officers suddenly fire at Crutcher. One of the officers, Shelby, fired her weapon at Crutcher, killing him. Almost simultaneously, the second officer fired his Taser at the man.

Shelby was later charged with manslaughter in the incident. During the spring 2017 trial, she and other officers argued that Crutcher was under the influence of drugs and was not complying with their demands. When Crutcher reached his car window, Shelby said she feared that he was reaching for a weapon, prompting her to shoot. A gun was not found in Crutcher’s car.

Shelby continued to argue that her decision to shoot Crutcher was based in reasonable fear, despite the fact that there was no weapon. “If I wait to find out if he had a gun or not, I could very well be dead,” she said in an interview with 60 Minutes before the trial last year. She also argued that Crutcher was responsible for the shooting. “What I based everything on was his actions, his behaviors,” she said in the interview. “Race had nothing to do with my decision-making.”

A jury later found Shelby not guilty of manslaughter. But in a letter published in the hopes of clarifying the decision, the jury foreman explained that they did not necessarily agree with how Shelby handled the situation, writing that several members of the jury “question her judgment as a police officer.”

“If she had any opportunity or flexibility of judgment to subdue the suspect with a less lethal force in the moments before the event culminated tragically, then her ability and judgment as an officer under pressure has to be called into question and serious consideration given to whether she be allowed to return to practicing law enforcement,” the foreman noted.

Shelby, frustrated that she had been assigned to desk duty by Tulsa police after the shooting, resigned from the agency. By August 2017, she’d accepted a new position as a reserve deputy with the Rogers County Sheriff’s Department. She was later promoted to a full-time position as a deputy.

Many of those criticizing Shelby’s course have not outright dismissed the training. Rather, their issue is that an officer once charged with a shooting an unarmed man — an officer who at one point argued that she was being pursued by a “lynch mob” for her actions — is the one teaching it.

“We applaud TCSO for giving officers a class to address their own mental health from an obviously stressful job,” Lewis of We the People said in a statement. “But we do not believe Betty Shelby is the right person to teach that course.”

It raises questions about how the aftermath of police shootings is discussed and whose voices and experiences are centered in those discussions. For those in Tulsa, tensions in this debate are compounded by a history of racial issues in the state.

Crutcher’s shooting followed other fatal or negative interactions with police in Oklahoma In 2015, a black man named Eric Harris was fatally shot by Robert Bates, a white reserve deputy working with the Tulsa County Sheriff’s Office. The deputy said he intended to use his Taser but fired his service weapon instead. The shooting raised questions about Bates’s qualifications and training as a deputy as well as corruption and poor training in the sheriff’s office. Bates was later charged and convicted on charges of manslaughter. He was released from prison in 2017 after serving a year and a half of his four-year sentence.

Later in 2015, Oklahoma also dealt with a different sort of police scandal after Daniel Holtzclaw, a former officer with Oklahoma City, stood trial on charges of sexually assaulting more than a dozen of black women while on duty. He was convicted on multiple charges of rape and sexual battery and was sentenced to more than 200 years in prison.

What is a snack, really?
Trump’s lawsuits challenging the election have turned into a clown show
A male lawmaker worries women will abuse a tax break to hoard tampons
A federal judge stopped Texas from ending its refugee program
“Shelter in place” is impossible if you can’t afford a home
Trump’s team is pushing for a debate on foreign policy. That could backfire.