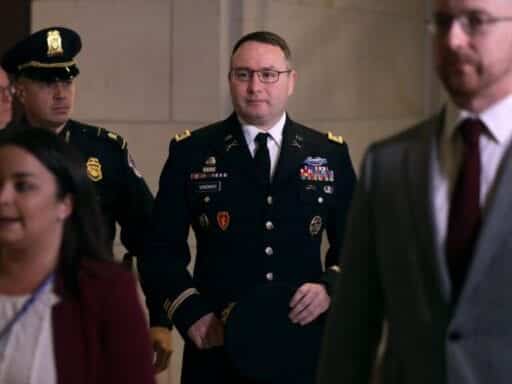 The newest witness for the House impeachment inquiry is Alexander Vindman, a National Security Council staffer and a US Army lieutenant colonel who arrived for closed-door testimony Tuesday morning — and he says he expressed serious concerns internally about Trump’s demands that Ukraine investigate the Bidens.

Vindman is the top Ukraine expert on the NSC staff — and his appearance is particularly noteworthy because the NSC is part of the White House staff, making him the first White House aide to testify in the inquiry. (He has chosen to comply with a subpoena from the House rather than attempting to defy it, as some Trump-friendly aides have done.)

Vindman says he has never interacted with Trump personally, but he was on the line for Trump’s two phone calls with Ukrainian President Volodymyr Zelensky, in April and July. And his testimony corroborates previous accounts that officials were deeply disturbed by Trump’s behavior — and seems to call into question whether previous testimony by Gordon Sondland, the ambassador to the European Union, was truthful.

According to a draft of his opening statement obtained by Politico, Vindman planned to say: “I am a patriot, and it is my sacred duty and honor to advance and defend OUR country, irrespective of party or politics.”

Overall, Vindman is just the latest in what’s become a parade of administration officials corroborating and elaborating on the complaint originally put forward by an anonymous whistleblower in August. He’s also a decorated veteran — and, apparently, Trump supporters are worried enough about what he’s saying to attack his background.

Who is Alexander Vindman?

According to a piece by the New York Times’s Danny Hakim, Vindman is a “Ukrainian-American immigrant who received a Purple Heart after being wounded by Iraq by a roadside bomb,” and who is “fluent in Ukrainian and Russian.”

Vindman has served in US embassies in Kyiv and Moscow, and also worked for the chair of the joint chiefs of staff in Washington, DC. And he joined the National Security Council staff in July 2018. He happens to have an identical twin brother, Yevgeny, who is also working on the NSC staff, as a lawyer. (Vindman says in his statement that he is not the anonymous whistleblower who kicked off this whole saga.)

One might think that this background as a decorated veteran would make Vindman a difficult witness for Republicans to attack — but on cable TV, conservatives like Fox host Laura Ingraham and CNN commentator Sean Duffy quickly made insinuations that his immigrant background called his loyalty to the US into question. (The three-year old Vindman brothers left the Soviet Union with their father and grandmother as refugees 40 years ago.)

Vindman’s draft statement calls attention to two episodes this summer that he says worried him enough to raise his concerns with the NSC’s top lawyer.

First, on July 10 — about two weeks before Trump’s infamous phone call with Zelensky — Vindman attended a meeting with Ukrainian officials and Trump administration officials, at the White House.

When the Ukrainians asked for a meeting between Trump and Zelensky, Vindman says, “Amb. Sondland started to speak about Ukraine delivering specific investigations in order to secure the meeting with the President, at which time Ambassador Bolton cut the meeting short.” (This is the meeting after which, according to former NSC aide Fiona Hill, Bolton said he is “not part of whatever drug deal” Sondland was cooking up.)

Vindman adds that just after this, at a “scheduled debriefing,” Sondland again “emphasized the importance that Ukraine deliver the investigations into the 2016 election, the Bidens, and Burisma.” Vindman says:

Parts of this have been previously reported, but Vindman frames this confrontation as a discussion about the Bidens specifically.

This appears to contradict Sondland’s own testimony in several ways — Sondland had claimed that he did not “recall” any discussions with White House officials about the Bidens, that he did not “recall taking part in any effort to encourage an investigation into the Bidens,” and that there were no “critical comments” for him after that particular meeting. If Hill — and now Vindman — are to be believed, Sondland failed to properly explain in his testimony that he was well aware of the political angle to Trump’s demands.

After this, Vindman says, he reported his “concerns” to the NSC’s lead counsel, John Eisenberg. He adds that Fiona Hill did the same.

The second episode Vindman focuses on is the call itself between Trump and Zelensky on July 25. He only discusses it briefly in the opening statement, saying, “As the transcript is in the public record, we are all aware of what was said.” But he describes his own reaction and response:

I was concerned by the call. I did not think it was proper to demand that a foreign government investigate a U.S. citizen, and I was worried about the implications for the U.S. government’s support of Ukraine. I realized that if Ukraine pursued an investigation into the Bidens and Burisma, it would likely be interpreted as a partisan play which would undoubtedly result in Ukraine losing the bipartisan support it has thus far maintained. This would all undermine U.S. national security.

He says that after the call, he again reported his concerns to the top NSC lawyer, John Eisenberg. (It is not entirely clear what Eisenberg did with all these complaints.)

Vindman’s testimony mainly stops there. But a report by the New York Times’s Danny Hakim suggests there could be more to the story. Hakim reports that Vindman’s superiors at the National Security Council directed him to write a memo releasing about $400 million in military aid for Ukraine that Trump had blocked — but that Trump “refused” to sign the memo.

Vindman does not mention this episode in his opening statement draft, but he will surely be asked about it. He does say early on that he is concerned he is worried about sensitive national security information being made public in the course of his testimony. “I would urge the Committees to carefully balance the need for information against the impact that disclosure would have on our foreign policy and national security,” he says in the draft.

All in all, Vindman’s testimony is yet another account that corroborates the whistleblower complaint and the overall picture that has been clear for months: that there was a quid pro quo of investigations for a White House meeting, that Sondland was a key enforcer, and that several officials were deeply disturbed by what was happening.

Why Asians in masks should not be the “face” of the coronavirus
The Parks and Rec reunion special was pretty good. Please don’t let it be the future of TV.
How wearing masks will change us
Vox Sentences: Talks before tariffs
More than 20 Democratic House candidates want Nancy Pelosi to step aside after 2018
The vital missing piece of the Democrats’ stimulus bill