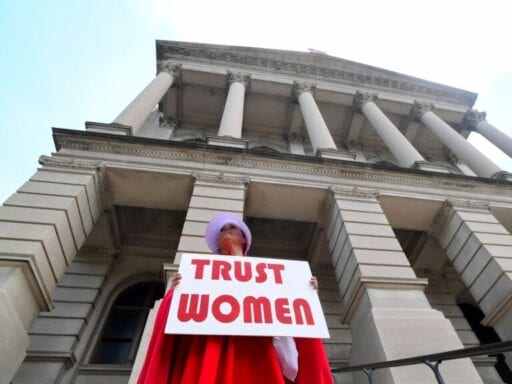 Share
Loading...
An activist with the Handmaids Coalition of Georgia stands outside the Georgia Capitol after an event opposing the state’s recently passed near-total ban on abortion on May 16, 2019 in Atlanta, Georgia. | JOHN AMIS/AFP/Getty Images

But the biggest threat to abortion might come from another place.

Near-total bans on abortion have swept the country this year, with state after state banning the procedure six weeks into pregnancy or even earlier. The laws inspired protests across the country and comparisons with Margaret Atwood’s dystopian The Handmaid’s Tale. But one by one, those laws have been blocked by courts.

Alabama is the latest. On Tuesday, Judge Myron H. Thompson of the U.S. District Court for the Middle District of Alabama issued a preliminary injunction blocking a law passed earlier this year that would ban abortion at all stages of pregnancy, with no exceptions for rape or incest. “Alabama’s abortion ban contravenes clear Supreme Court precedent,” the judge wrote. “It defies the United States Constitution.”

Of course, Alabama’s ban and six-week bans in Georgia, Ohio, Kentucky, and elsewhere were designed to face a court challenge. They were part of a strategy by abortion opponents to pass legislation running directly counter to Roe v. Wade, the 1973 Supreme Court decision that established Americans’ right to an abortion. The goal was to force the Supreme Court to take up one of the “heartbeat” laws and use it to overturn Roe.

But mainstream anti-abortion groups are becoming increasingly skeptical of that strategy, arguing that even with President Trump’s appointment of conservative Justice Brett Kavanaugh, the Supreme Court isn’t actually eager to get rid of Roe, especially by upholding a controversial abortion ban like Alabama’s. Instead, they’re returning to a previous strategy: backing incremental laws that restrict clinic operations or introduce new requirements for getting an abortion.

And that strategy is about to face a big test: Earlier this month, the Supreme Court announced it would hear a case concerning a Louisiana law requiring abortion providers to have admitting privileges at a local hospital. Depending on what the justices decide, the case could give states across the country the green light to pass stricter and stricter restrictions on clinics, forcing them to close and making abortion impossible to access — even if the procedure remains technically legal.

The injunction against the Alabama ban is temporary and the legal challenges to laws in other states are also in progress. And, of course, no one except the nine justices knows exactly what the Supreme Court will do. But for now, it looks as though the biggest abortion news of 2019 might not be the near-total bans that swept the country in the first half of the year, but a slower, quieter strategy that’s been in the works for a long time — and that might be about to bear fruit.

Near-total abortion bans like Alabama’s swept the country this year. Most have been blocked by courts.

The law blocked in Alabama would have banned abortion at all stages of pregnancy, with no exceptions for rape or incest. Under the law, abortion would only be legal if the pregnant person’s life was at risk. Without the injunction, the law was scheduled to take effect on November 15.

The Alabama law was the most restrictive to pass this year. But “heartbeat” laws, passed in Georgia, Ohio, and elsewhere, were meant to ban abortion as soon as cardiac activity can be detected on an ultrasound, which usually happens around six weeks into pregnancy. Abortion rights groups have argued that the “heartbeat” terminology is misleading since the fetus does not have a developed heart at six weeks and the cardiac activity comes from a structure called the fetal pole. They typically call the laws six-week bans instead.

Whatever the terminology, the laws effectively ban abortion before most people know they are pregnant and would function as near-total bans on the procedure.

The laws began sweeping the country last year, with Iowa passing one in May 2018. The process accelerated in early 2019, with Ohio, Mississippi, Kentucky, and Georgia all passing a version between the beginning of January and the end of May (Louisiana also passed a version of the law but it is designed only to go into effect if Mississippi’s law survives a court challenge). Georgia’s was the most high-profile, inspiring protests around the country and prompting some film production companies to pull out of the state.

Many of these laws were explicitly crafted as challenges to Roe v. Wade. Their sponsors knew they would face legal challenges and hoped the case would make it all the way up to the Supreme Court, where the justices would use it to overturn Roe. “What I’m trying to do here is get this case in front of the Supreme Court so Roe v. Wade can be overturned,” Alabama Rep. Terri Collins, who sponsored her state’s bill, told the Washington Post earlier this year.

One part of the strategy worked: The laws have all faced legal challenges.

But some doubt whether the laws will ever make it to the Supreme Court. Clarke Forsythe, senior counsel for the anti-abortion group Americans United for Life, wrote in the National Review in May that if the Supreme Court wanted to revisit Roe it would be unlikely to choose the highly controversial “heartbeat” laws as the vehicle with which to do so. And in August, the National Right to Life Committee, which calls itself “the nation’s oldest and largest pro-life organization,” actually opposed a near-total ban on abortion in Tennessee.

“There is no majority on the Supreme Court that we can identify that would uphold such a thing,” said James Bopp, the group’s general counsel, in impassioned testimony against the bill.

The movement for near-total abortion bans isn’t entirely over — the Tennessee bill has yet to come up for a vote and a “heartbeat” bill is currently before the state Senate in South Carolina. But increasingly, mainstream anti-abortion groups seem to view these bans as expensive legal battles they’re unlikely to win.

They may not have to win those battles, though, because there’s another way to make abortion essentially impossible to get.

Earlier this month, the Supreme Court announced that it would hear the case of June Medical Services v. Gee. The case concerns a 2014 Louisiana law requiring abortion providers to have admitting privileges at a local hospital. The law is one of many abortion clinic restrictions passed by Republican-controlled state legislatures since 2010. Abortion-rights supporters argue that the laws are medically unnecessary and aimed merely at shutting clinics down and they were responsible for closing half the clinics in Arizona, Kentucky, Ohio, and Texas between 2011 and 2017, according to the Guttmacher Institute.

The Supreme Court ruled that an admitting privileges law in Texas was unconstitutional in the 2016 case Whole Woman’s Health v. Hellerstedt. But as Vox’s Ian Millhiser has noted, that was a different time and a different court. With the addition of Kavanaugh, conservatives on the Court may have enough votes to reverse Whole Woman’s Health, deciding in favor of the Louisiana law in June Medical Services. That would open the door for Republican-controlled states to pass ever more stringent clinic restrictions, closing more clinics and effectively eliminating abortion access for many people, especially those too poor to travel to one of the few clinics remaining open.

Significantly, the Court would not have to overturn Roe for states to greatly curtail abortion access. Nor would states need to ban the procedure outright to make it inaccessible to many of their residents. If the Louisiana law were to go into effect, two of the three remaining clinics in the state could close.

Whatever happens with June Medical Services, abortion access for countless Americans hangs in the balance. And while near-total bans like Alabama’s were the ones making headlines earlier this year, a lesser-known Louisiana law is poised to make a much bigger difference.

The governor of Alabama signed the nation’s strictest anti-abortion bill into law. Vox’s Anna North explains what the legislation means and Sean Rameswaram speaks with Eric Johnston, the man who helped write it.

Looking for a quick way to keep up with the never-ending news cycle? Today, Explained will guide you through the most important stories at the end of each day.

Facebook showed this ad almost exclusively to women. Is that a problem?
The coronavirus exposes the history of racism and “cleanliness”
How to squirrel-proof the power grid
Southern California sheriffs are refusing to enforce stay-at-home orders
“They just see that you’re Asian and you are horrible”: How the pandemic is triggering racist attack...
A wave of moderate House Democrats are suddenly eager for an impeachment investigation