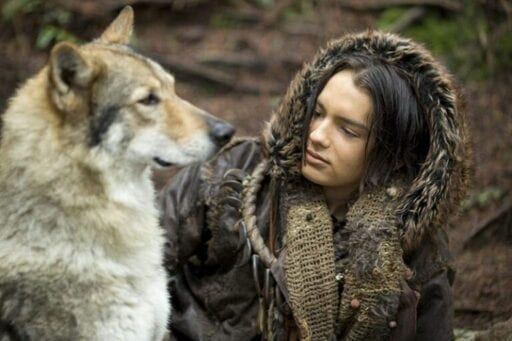 Share
Loading...
I’m mostly surprised Alpha got made. On one hand, it’s thoroughly conventional: a drama about a teenager who is separated from his family and, while finding his way home, learns to be a man, with the help and companionship of his dog.

That’s basically the plot of a family-friendly Disney-style film, peppered with heartwarming moments of connection and growth and discovery. Predictably, it’s been marketed as such — a coming of age tale and an “incredible story of how mankind discovered man’s best friend,” as one official tagline puts it.

But on the other hand, Alpha is way, way off the map for such a film. Directed by Albert Hughes (The Book of Eli), Alpha is definitely sentimental, even pandering at times. But its unexpected setting, images, set pieces, and even language balance out the sentimentality with a strangely raw and cinematically adventurous aesthetic that’s uncommon for a film of its sort.

That almost makes Alpha worth seeing just to witness how audacious it is. But it’s genuinely affecting at times, too. If the boy-and-his-dog movie plot attracts you, you’ll like Alpha, but even if it doesn’t, the movie probably still deserves another look.

Alpha is a coming of age story set in the … Ice Age?

Alpha is set 20,000 years ago, and not in a cute or playful way. I don’t know how historically accurate it is, but you sure feel the raw urgency of trying to scratch out a living as a hunter in the unforgiving climates of northern England without much protection from the elements.

In that prehistoric world lives a clan of hunters led by Tau (Jóhannes Haukur Jóhannesson), a wise man who’s preparing his young son, Keda (Kodi Smit-McPhee), to eventually take over as his role. As the (relatively) warm season arrives, the men prepare to embark on the journey that will bring them to the hunting grounds.

Tau tells his wife Rho (Natassia Malthe) that Keda will accompany them. She pushes back against this plan, worried that he won’t return — she thinks he leads too much from his heart, and not his spear, to really be safe. But Tau assures her that Keda will be fine, and that he’s much stronger than she thinks.

Keda is very soft-hearted, reluctant at first to kill any living being, which is not a particularly desirable quality in a hunter. And when the clan tracks a buffalo, his timidity becomes his downfall, as he’s charged and then thrown off a cliff, onto a ledge far below. His broken-hearted father and the rest of the men leave him for dead.

And then, he wakes up.

The greatest strength of this first section of Alpha lies mostly in its arty and even fantastical images — wide vistas, flickering firelight, slow-motion herds of charging animals — that make it seem better suited for IMAX screens and planetarium projection at science museums than just a movie theater.

But there’s a dreamy quality to the interactions between the characters in the film’s first third that sometimes slows the movie down. Alpha is the rare film that dares to imagine that American audiences are willing to sit in a multiplex and read subtitles, since the members of the clan, who already don’t utter much dialogue, speak in an unidentified prehistoric language. And what they’re actually saying gets a bit stilted at times.

The movie really only gets going once Keda is separated from the tribe and, while trying to stay alive, winds up in the company of a wounded wolf who has been separated from its pack. Slowly, carefully, he nurses the wolf back to health and asserts his own dominance over the animal. In other words, we’re watching the domestication of the first dog, whom Keda names Alpha. The two, it soon becomes clear, will need one another’s help if they’re to survive the winter.

You can imagine the PG-rated version of this movie, but Alpha aims for more realism than a PG rating would allow, and thus there are moments that induce uncomfortable yelps or grimaces or gasps. Keda eats squirming grubs. He walks past carcasses buzzing with carnivorous insects. He learns, eventually, how to spear a boar.

At first, Smit-McPhee plays Keda as reserved and fearful. But as Keda is forced to not just care for himself but also work with another creature, he grows bolder and more confident. And the wolf’s expressions as he interacts with Keda, growing slowly closer to him over time, make him a worthy scene partner. (Presumably there’s some digital trickery happening to make the wolf seem to have emotions, but it’s not detectable.)

As Keda staggers across the wilderness carrying an injured wolf, or nearly shivers to death, or is stalked by hyenas, his struggle is palpable (especially if you’re watching the movie in 3D, which occasionally makes it feel like things are flying right at you). Life in the late Ice Age wasn’t much fun, and one can imagine parents bringing their children to this film just to remind them that having to mow the lawn or clean up their room is really not the worst thing imaginable.

So even though the plot of Alpha is ultimately predictable, with an ending that barely avoids careening into the outright manipulative, its trappings are anything but expected. It gets a little tedious at times. But at other times it’s genuinely engrossing, and it’s always unexpected, even when the story takes obvious turns. A boundary-pushing, subtitled, Ice Age-set coming of age drama about a good dog and a teenager who misses his family, but who sets his own broken ankle and tears into a raw, recently hunted rabbit with his teeth? I’m surprised it exists, but I hope it’s not the last of its kind.

Alpha opens in theaters on August 17.