Americans were asked to name the best president of their lifetime, and Obama won 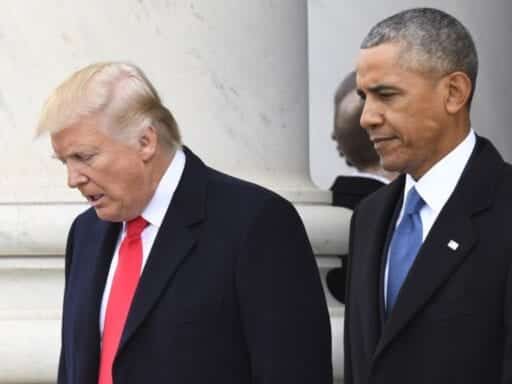 According to a Pew Research survey, 44 percent said Obama. Trump came in fourth.

President Donald Trump doesn’t like to talk about polls unless they’re good polls. So it’s unlikely that he’ll bring up the latest survey from the Pew Research Center, which says that more Americans consider Barack Obama the best or second-best president of their lifetime.

Trump comes in fourth, behind Bill Clinton and fellow Republican Ronald Reagan. But he did beat out both Bushes — not even two years into his presidency.

Pew asked respondents to name the president who had done the best job in their lifetimes and combined their first and second responses. Obama was rated the best president with 31 percent and second choice by 13 percent, giving him a grand total of 44 percent.

A total of 10 percent of respondents said Trump was the best president of their lifetime, followed by 9 percent of people who said he was their runner-up, bringing him to 19 percent.

The results of the survey do tend to skew toward more recent presidents, given the age demographics — which is why presidents like FDR, John F. Kennedy, and Dwight D. Eisenhower, who often end up in the top of the all-time presidential lists, didn’t make the cut, and for whom only silents and some boomers can vouch for these days. (Pew surveyed 2,002 adults between June 5 and 12 for this poll.)

But there’s a silver lining for Trump: When the responses are broken down along party lines, the current president fares a bit better. A combined 40 percent of Republicans or people who lean Republican across all age groups say Trump is one of the top two presidents of their lifetimes — though Reagan still wins, with 57 percent of the votes.

Democrats, or those who lean Democrat, overwhelmingly favor Obama by 71 percent, with Bill Clinton in second place at 49 percent.

Democrats are also the least likely to view Trump as deserving of “top president” status. Just 3 percent gave him that distinction. But at least 13 percent of Republican or Republican-leaning voters said Obama was the best or second-best president during their lives.

The survey’s dramatic split between Republican and Democratic perceptions is another example of the country’s extreme polarization. But there’s also hope for Trump: Only 20 percent of respondents thought Obama was the best or second-best president when Pew conducted a similar survey in 2011, during Obama’s first term. So Trump still has some time to dismantle Obama’s legacy here, too.

A special education teacher explains why virtual learning is so hard on her students
Trump is postponing the Putin visit until after the “Russia witch hunt”
Fauci: Coronavirus vaccine could be available by end of 2020
Trump’s new thing is musing about kissing his fans during a pandemic
Trump is reportedly considering making Sidney Powell a special counsel on election fraud
Extreme poverty is getting worse across the globe for the first time in decades