Rep. Jim Jordan is attacking CNN for reaching out to his ex-staffers 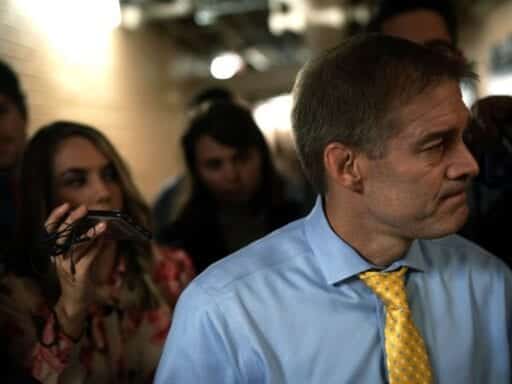 Jordan calls CNN “fake news” and “desperate” for trying to dig up “dirt” on him.

Rep. Jim Jordan is on the attack — first against the former Ohio State wrestlers who say he turned a blind eye to rampant sexual abuse while an assistant wrestling coach at the university, and now against the media outlet reporting on the story.

Jordan attacked CNN on Twitter Wednesday, calling the organization “fake news” and “desperate” for contacting his former staffers and interns.

Now @CNN is contacting all 100+ of our former staff and interns asking for dirt on me. Getting desperate! How can you ever trust such #fakenews?

Jordan’s comment feeds into what has been a growing war against mainstream media outlets, in the Trump era. According to an April poll from Monmouth University, 77 percent of American survey takers said they believed major traditional television and newspaper media outlets reported “fake news” — a label Trump freely throws at unfavorable press.

Jordan has been under scrutiny ever since Ohio State University began conducting an investigation into Dr. Richard Strauss, who died in 2005, for repeated reports of sexual assault and rape. One Ohio State wrestler said he estimated Strauss sexually assaulted or raped at least 1,500 — and possibly up to 2,000 — athletes at Ohio State between 1978 through 1998, based on student testimony.

One of the most powerful conservatives in the House, who is also considering a bid for House speaker, at least seven former wrestlers have accused Jordan of knowing about the abuse but doing nothing.

But Jordan has repeatedly denied that he knew anything about the abuse at Ohio State, calling the accusers liars for involving him, and claiming one of the former wrestlers had a “vendetta” against his family and the university. He’s also raised questions about the timing of the reports, in line with his possible speaker bid, and his involvement in Congress’s hearings about the FBI’s handling of the Russia investigation.

“I never knew about any type of abuse,” he said. “If I did, I would have done something about it. And look, if there are people who are abused, then that’s terrible and we want justice to happen.”

The Freedom Caucus founder has found support among conservatives. House leaders, like House Speaker Paul Ryan who called Jordan a “man of integrity,” and Majority Leader Kevin McCarthy, as well as Jordan’s colleagues in the House Freedom Caucus. Even President Donald Trump chimed in, saying he believes Jordan over the former wrestlers.

The investigation into the Ohio State scandal is still underway.

“This is now the new normal”: An expert explains why cybersecurity risks aren’t going away
Suburban women could be Trump’s undoing
Exclusive: State Department cable shows plan to restrict pregnant women from visiting the US
Did Joker deserve all the discourse?
A simpler, more useful way to tax carbon
Trump wants to change how poverty is calculated — to make fewer people eligible for benefits