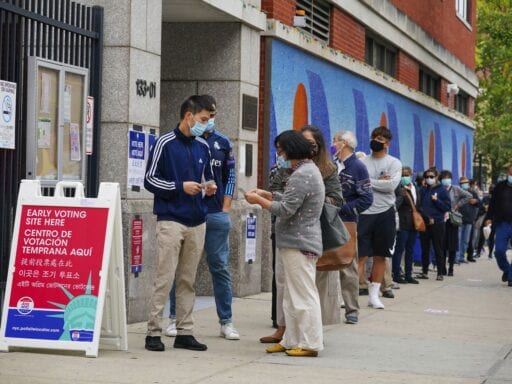 People wait in a line to vote at the Boys’ Club of New York Abbe Clubhouse in Flushing, Queens, during early voting for the US presidential election on October 24, 2020, in New York City. | John Nacion/Star Max/IPx/Associated Press

“Ignore us at your peril.”

Many political campaigns have historically fallen short when it comes to Asian American voter outreach.

According to a survey conducted after the 2016 election by AAPI Data, an organization dedicated to studying Asian American and Pacific Islanders’ political engagement, roughly 70 percent of voters hadn’t been contacted by either political party during that cycle. And in a September 2020 poll, about half said the same.

While it’s worth noting that outreach — particularly by former Vice President Joe Biden’s campaign and House Democrats’ campaign arm — has ramped up in the months since the survey was released, the data still speaks to how few voters had been contacted just a few months from Election Day.

“Campaigns aren’t quite starting early enough. We’ve really only seen this uptick … [and] a lot more engagement in the last four to six weeks,” says Jennifer Baik, a communications and policy associate at APIAVote.

AAPI voters are one of the fastest-growing — and increasingly pivotal — groups of voters in the country. A group that’s composed of more than 15 ethnicities, AAPI voters’ proportion of the electorate more than doubled between 2000 and 2020, according to Pew Research. This year, over 11 million Asian Americans and Pacific Islanders are eligible voters.

AAPI voters have also trended more Democratic in recent elections: 65 percent voted for Hillary Clinton and 27 percent voted for Trump in 2016, according to an Edison Research exit poll. The AAPI Data poll this cycle, however, has shown a slight uptick in Trump support across multiple ethnic groups, including Vietnamese Americans and Indian Americans.

In the past, organizers say that campaigns haven’t paid as much attention to AAPI voters partly because of the smaller size of the group and self-fulfilling assumptions about turnout: Given dips in AAPI voters’ turnout rates in the late 1990s and early 2000s, campaigns balked at investing, leading to minimal returns from the efforts that were made. Because of the many linguistic differences and policy priorities within the AAPI community, some campaigns also haven’t been willing to put in the work to target each specific group.

Growing AAPI engagement, however, is becoming increasingly critical: In 2018, AAPI voters saw a significant spike in turnout, which mostly favored Democrats. That year, 40.2 percent of AAPI voters turned out to vote, compared to 26.9 percent in 2014. And in 2020, in crucial battleground states including North Carolina, Pennsylvania, and Georgia — where they comprise 3.5 percent, 4 percent, and 3 percent of the electorate, respectively — AAPI voters could be a key group that decides those elections.

“When you are talking about these smaller margins, it becomes so critical and it becomes lunacy not to look at AAPI voters,” says Manjusha Kulkarni, executive director of the Asian Pacific Policy and Planning Council. “Ignore us at your peril.”

What has improved this cycle

While not perfect, there have been major strides in AAPI outreach in 2020, including plenty that future campaigns can keep building on.

Beginning in the Democratic primary, a greater focus on AAPI voters was apparent: This cycle marked the first one when every major candidate had an AAPI outreach director and a dedicated focus on working with regional AAPI leaders and organizations. A landmark Twitter town hall in February also focused specifically on issues raised by AAPI voters, including gun control, immigration, and data disaggregation, a push to ensure that data doesn’t obscure disparities and differences within Asian American communities.

Part of this increased attention was likely driven by how competitive the Democratic primary was — which pushed candidates to reach out to as many voters as they could to gain an edge.

Since then, both presidential campaigns have allocated resources to reaching AAPI voters, with the Biden campaign, especially, using a wide range of methods, including support for 14 different affinity groups, live translations at events, an advertising buy that has aired in at least 16 states, a virtual bus tour, and tailored op-eds published in ethnic media outlets. The campaign’s materials have also been translated into 20 Asian languages including Hmong, Hindi, Tagalog, Korean, Chinese, and Japanese.

Biden’s pieces in ethnic media are some of the first from a presidential candidate and have focused on the denuclearization of North Korea in South Korea’s Yonhap News and noted how his family’s own immigrant background has brought him closer to Indian American immigrants in India West. He’s also published posts in Viet Bao and World Journal, publications with Vietnamese American and Chinese American readership, respectively.

“That’s a way that our community hasn’t been engaged before,” says Tony Choi, a former staffer who worked on AAPI outreach for Tom Steyer’s presidential campaign. Kulkarni pointed to Biden and Sen. Kamala Harris’s greetings at the start of a Hindu festival called Navratri as something that was notable as well — and an acknowledgment “that seems huge for our communities because they get so little.” In early October, Biden also posted a tweet commemorating the Korean holiday Chuseok.

As NBC News has reported, Harris’s nomination as a vice presidential candidate is among the factors that have energized and activated a segment of Indian American voters, who’ve organized in support of the Biden-Harris ticket by setting up online groups and phone banking in languages including Tamil, Hindi, and Urdu.

“We’re proud of our individualized and culturally relevant outreach to engage with some of the AAPI voters who may have felt neglected before,” says Amit Jani, the Biden campaign’s national AAPI director. “We’ve worked hard to ensure the AAPI community feels galvanized, empowered, and heard — that their voices and votes matter.”

President Donald Trump’s team has launched its own AAPI voter outreach, though it appears to be much narrower in scope. According to a September report in the Daily Caller, the campaign has held more than 1,000 virtual and in-person gatherings aimed at AAPI voters, with events taking place in seven languages.

“Asian Americans, myself included, have consistently supported candidates who advocate for a safe and strong America, more of their hard-earned money in their pockets, the freedom to pick the best schools for our children and lower taxes,” Trump deputy national press secretary Ken Farnaso told Axios in a statement.

At the congressional level, House Democrats have put forth an unprecedented effort to reach AAPI voters this cycle as well, including digital advertisements in Chinese and Hindi, part of a broader seven-figure media and direct mail campaign.

These investments have already seen significant returns, according to Darwin Pham, a DCCC deputy national press secretary and AAPI media adviser. In several battleground districts, there’s been a significant uptick in AAPI voter participation compared to 2016: In California’s 39th District, for example, four times as many AAPI voters have already voted early compared to the last presidential election.

Two House campaigns, in particular — Rep. Gil Cisneros’s in California’s 39th and Sri Kulkarni’s in Texas’s 22nd — are frequently highlighted for how effective and thoughtful their outreach strategies have been. Cisneros’s campaign has focused heavily on the use of in-language media and apps like WeChat and KakaoTalk to connect with voters, while Kulkarni’s has been notable for building an outreach effort in 21 languages.

Texas candidate @SriPKulkarni, who hopes to flip a GOP congressional seat, is campaigning in 21 languages pic.twitter.com/oKGuKc9rTp

“I think that people are finally starting to take it more seriously. I think that people are understanding that we just can’t rely on the anonymous Midwestern white man to win the election for us,” says Mary Lou Akai-Ferguson, who served as the Asian American and Pacific Islander outreach director for Sen. Elizabeth Warren’s presidential campaign.

What could still use work

While the campaign efforts have gotten a lot better this cycle, organizers note that engagement can always start earlier — and be more consistent, rather than concentrated in the period shortly before an election. “Asian American voters tend to come a little bit later, and that’s not really good enough,” says Baik.

Limited and delayed outreach can mean voters are predominantly relying on informal information sources. Misinformation, driven by groups on the right, has been rampant on social media this cycle and spread widely on popular platforms including WhatsApp and WeChat — reaching many voters, including Asian Americans.

A lack of outreach can also mean that campaigns miss out on how best to serve their AAPI constituents. “The harm is that they don’t know what issues are important to the community, and if they don’t know that, they certainly aren’t going to address that and the community suffers,” says Jerry Vattamala, a director at the Asian American Legal Defense and Education Fund.

In terms of effective longer-term community building, experts credit regional organizers with the work they’ve done to connect with communities and mobilize them.

“The most growth and the most innovation is from the grassroots,” Chang adds, who says she has been heartened by the rise of 501 (c)(4)s, or nonprofits that can take political stands on candidates. Among the organizations she cited that have played a large role this election was the Asian Pacific Islander Political Alliance in Pennsylvania, which has helped place hundreds of thousands of phone calls in different languages in the state, a battleground for the presidential election.

An issue that many campaigns have dealt with, too, is a lack of comprehensive data on AAPI communities, which can make tasks like phone banking more challenging.

“When you go into the voter database, the biggest issue is data. When you go into databases, they do a really bad job of sorting out who is what ethnicity,” says Taz Ahmed, a senior narrative specialist at the AAPI Civic Engagement Fund, who noted that some of this is due to the limited information that registered voters provide. This lack of detail can create challenges when it comes to targeted in-language outreach, and Choi notes that campaigns can put more pressure on data vendors to refine the information they have.

“Campaigns can push data vendors to be more accountable, and be better at prioritizing this,” says Choi. Ahmed has said that she’s parsed this data herself to organize phone banking lists by different languages.

Continuing to refine the translations of in-language materials in general, and offering more of them, is another major area of potential growth. While many campaigns are already making solid inroads, further expanding the resources that are available to voters continues to be important.

“We have a professional do the first cut and then we have a community group or person proof that translation, so that it makes sense,” says Vattamala.

Ultimately, the approach that campaigns take sends a message about how much AAPI voters matter to the political process. “A long-term investment in Asian American voters now will pay off far into the future,” says University of Maryland political science professor Janelle Wong.