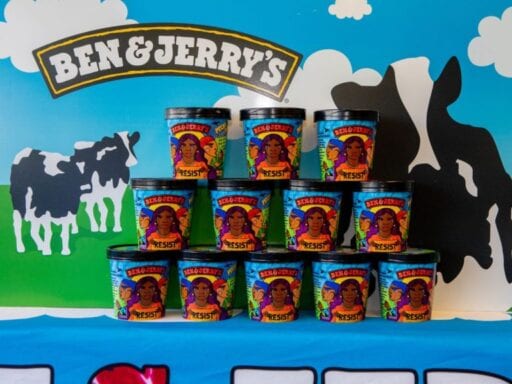 Money will be donated to the Women’s March and Neta whether or not you buy Pecan Resist. The flavor’s just a bonus.

Vermont-based ice cream maker and self-proclaimed “aspiring social justice company” Ben & Jerry’s just launched a new ice cream flavor to support progressive politics. But as is often true when brands take stands, it’s hard to know exactly how much is effective action, how much is savvy marketing, and how much the difference matters. The risk is this: When brands try to draw attention to a cause, they often wind up diverting attention to themselves.

“Pecan Resist,” the press release explains, is “a movement to lick injustice and champion those fighting to create a more just and equitable nation for us all.” It is also an ice cream flavor. (According to the Ben & Jerry’s website, the resistance tastes like “chocolate ice cream with white & dark fudge chunks, pecans, walnuts & fudge-covered almonds.”)

“Alongside all those nutty chunks, this pint packs a powerful message under its lid: together, we can build a more just and equitable tomorrow,” the website copy explains. “We can peacefully resist the Trump administration’s regressive and discriminatory policies and build a future that values inclusivity, equality, and justice for people of color, women, the LGBTQ community, refugees, and immigrants.”

Specifically, Pecan Resist — the movement, not the flavor — will be supporting four different organizations that Ben & Jerry’s identifies as “working on the front lines of the peaceful resistance.” Color of Change focuses on racial justice; Honor the Earth works to raise “awareness and support for Native environmental issues”; Women’s March aims to “harness the power of diverse women” to affect social change; and Neta is a media platform amplifying the voices of people of color living along Texas-Mexico border. Ben & Jerry’s will be donating $25,000 to each organization. The company is also urging fans to “speak out” against the Trump administration’s socially regressive policies, and presents the option to “take action now” by signing up for emails from the partner organizations.

This isn’t the brand’s first foray into progressive politics. There was a 1988 attempt to help indigenous nut farmers in Brazil with the Brazil-nut-flavored “Rainforest Crunch,” according to Pacific Standard’s political timeline of the company. There was also the 2007 “Yes Pecan!,” which raised money not for the Obama campaign, but for the Common Cause Education Fund. (Pecan is a popular flavor for puns.)

The idea, in general, has been to raise awareness of (and sometimes money for) various progressive causes. And while the ice cream makers have been vocal and early, they are not alone. “When it comes to viral marketing, the resistance is hot right now,” wrote Amanda Hess in the New York Times, citing a long list of brands across categories: Glossier (millennial-oriented no-makeup makeup), Reebok (athletic wear), Morton’s Salt (salt).

Is this bad? Maybe not. But in 2018, the business of awareness is complicated. The main problem is: We are already very aware.

“The typical refrain from brands that take on a cause is that they are ‘using their platform’ to ‘raise awareness’ about an issue,” Hess wrote. “But the internet has complicated the transaction. Modern news audiences are bombarded with too much information, and right now, it all seems to be news for or against President Trump. Brands that enter the fray aren’t so much ‘raising awareness’ as they are jostling for their own messaging to be seen amid the rush of signals.”

Of course, just because a brand is capitalizing on the resistance doesn’t mean the politics are insincere. It is extremely possible to strongly disagree with the policies of the Trump administration and also want to sell ice cream. It is possible to realize that one might help you do the other. And even if they don’t sell any resistance ice cream at all, the brand is still giving $25,000 to each of the partner organizations — a flat donation that “exceeds any profit we expect to see from this flavor,” a Ben & Jerry’s spokesperson said. That’s something!

At the same time, the campaign is part of a larger trend, with brands offering consumers the opportunity to consume their way into “the resistance” — an inherently flawed proposition.

Part of the allure of the “resistance brand,” Hess points out, is that it presents a more appealing alternative to the annoying time-suck of actually resisting. The problem isn’t progressive ice cream; the problem is that buying ice cream — or mascara, or salt — is not civic engagement, even if you sign up for the emails.

GM is all-in for electric vehicles in this new Super Bowl ad. What changed?
Nintendo’s latest gamification of exercise, explained
Democratic socialism, explained by a democratic socialist
Why does Michael Cohen keep publicly hinting that he’ll flip on Trump?
4 winners and 2 losers from Trump’s 2020 State of the Union
James Gunn’s firing shows we’re still living in the Gamergate era