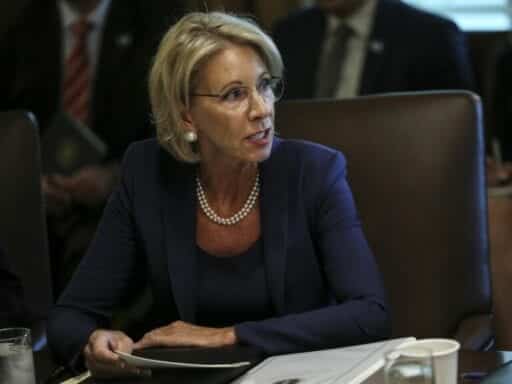 US Secretary of Education Betsy DeVos is considering a policy change that would allow states and school districts to use federal money to buy guns for teachers, according to a report by the New York Times’s Erica Green.

This comes as the idea of arming teachers is picking up steam among some conservatives since the Marjory Stoneman Douglas High School shooting in Parkland, Florida, in February. Two Florida universities have pilot programs to arm educators, and the Florida state legislature passed a bill in March that would allow armed teachers in school classrooms.

The federal government typically bans the use of federal funds to purchase firearms for schools. But DeVos and officials at the Department of Education are reportedly considering the use of Student Support and Academic Enrichment grants — which don’t exclude states or local districts from buying guns. The department wouldn’t need Congress’s approval, since the grants are already law.

These grants are part of the Every Student Succeeds Act, a major federal education law passed in 2015. The grants are typically used to boost student health and wellness, but they don’t say they can’t be used to buy firearms.

With all the discussion about increasing the number of armed professionals in schools this year in the wake of more high-profile school shootings, Congress has stopped short of using federal money to arm teachers. A school safety bill passed earlier this year that contained $50 million per year for districts, but it banned the districts from using any of the money to buy firearms.

Hill also told Education Week, “The NY Times piece is getting blown way out of proportion.”

There’s also a new effort underway in the Senate to try to stop DeVos from moving forward, should she choose to. Sen. Chris Murphy (D-CT), an outspoken supporter of gun control issues, introduced an emergency amendment to an Education Department funding bill on Thursday that would ban DeVos from using federal money to arm teachers.

The Dept of Ed funding bill is on the floor right now and I’m introducing a last minute emergency amendment today to stop Devos’s plan to arm teachers.

My lord – we can’t let this happen.

“My lord — we can’t let this happen,” Murphy said.

The Education Department reportedly started studying the issue after getting a question from officials in Texas about whether the federal ESSA grants could be used to buy guns, according to Education Week’s Andrew Ujifusa.

“Department officials have been researching the issue, like they do with every issue, in response to this Texas letter,” a senior Trump administration official told Ujifusa, noting that while discussions were ongoing, no final decision has been made yet.

If DeVos were to approve the money to allow local districts to buy guns or train teachers on using them, the decision would likely be extremely controversial, both within the education community and outside it.

“The President’s notion that we can make kids feel safe by allowing more teachers to walk around with guns is absurd — and dangerous,” said former Arizona Congress member and gun control activist Gabrielle Giffords in a statement. “Arming teachers is not a solution. It recklessly puts American children in even more danger.”

“We knew Betsy DeVos would try to do the bidding of the National Rifle Association and the gun manufacturers, but to even consider diverting resources used to support poor kids to flood schools with more guns is beyond the recklessness we believed she was willing to pursue,” Weingarten said on a press call Thursday. “She wants to turn the US government into an arms dealer for schools. That’s insane.”

The National Association of Secondary School Principals advocacy director Amanda Karhuse tweeted that the association is “strongly condemning” the idea. A similar statement came from Sasha Pudelski, assistant director for policy and advocacy for the School Superintendents Association, who said her organization is “strongly opposed” to the idea and added she is “super disturbed” by it.

Super disturbed by this report that Secretary DeVos is weighing opening up Title IV funds for the purchase of weapons. @AASAHQ absolutely opposes using federal funds meant to support the health and well-being of children for arming teachers. https://t.co/3n67DtSTK7

This likely isn’t the last we’ve heard of this under the Trump administration. President Trump tweeted his support for arming teachers in February after the Marjory Stoneman Douglas shooting. He added that the decision should be left up to states.

“Shootings will not happen again — a big & very inexpensive deterrent,” he tweeted.

The idea of arming teachers is one of the few on which congressional Republicans disagree with the president. Republicans in the House and Senate have balked at the idea of using federal money for the effort.

But this latest discussion within the Education Department could take a controversial idea and turn it into a reality, unless Congress intervenes.

Beto O’Rourke pulled in a massive fundraising haul — and 2020 competitors are noticing
Brett Kavanaugh’s questionable definition of “boof,” explained
Back-to-school shopping has gotten easier — but at whose expense?
Golden Globes 2020 winners: the full list of wins and nominees (live)
EBay’s former CEO denies any link to the cyberstalking of a blogger. But he did want to create a com...
The complicated story around Rep. Katie Hill, explained