Boris Johnson had a really bad day in Luxembourg. The Incredible Hulk was involved. 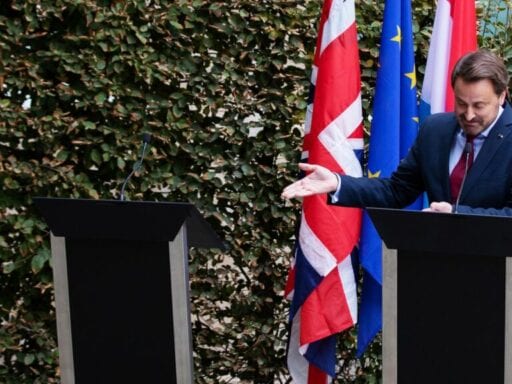 It all points to the growing frustration in Brussels with the British prime minister and his Brexit antics.

Boris Johnson is having a rough few weeks.

Since becoming UK prime minister in July, Johnson has lost his Conservative majority, got defeated in Parliament many times, had his brother quit on him, and is now facing legal challenges for his decision to suspend Parliament.

And today, he got dunked on by the tiny European country of Luxembourg.

Johnson went to Luxembourg to discuss Brexit with European leaders including European Commission President Jean-Claude Juncker. Afterward, Johnson was supposed to appear at an outdoor press conference with Luxembourg’s Prime Minister Xavier Bettel — but a loud group of anti-Brexit protesters apparently scared Johnson off from attending.

So Bettel went on without him, addressing the media with an empty podium beside him.

And without Johnson there to object or defend himself, Bettel went for it, criticizing Brexit, which he called a “nightmare,” and Johnson’s handling of it both at home and abroad. He accused Johnson of not putting forward any new, workable plans for a Brexit agreement with the European Union since becoming prime minister and laid the blame for the entire Brexit mess squarely at the feet of Johnson and his fellow Brexiteers in the UK.

“Our people need to know what is going to happen to them in six weeks’ time,” Bettel said. “They need clarity, they need certainty, and they need stability. You can’t hold a future hostage for party political gains.”

Bettel continued, gesturing to the empty podium: “So now it’s on Mr. Johnson, he holds the future of all UK citizens and every EU citizen living in the UK in his hands. It’s his responsibility. Your people, our people, count on you. But the clock is ticking, use your time wisely.”

“It’s on Mr Johnson; he holds the future of UK citizens and EU citizens in the UK in his hands.”@Xavier_Bettel warns @BorisJohnson “the clock is ticking” and to use his time “wisely” in what was supposed to be a joint-statement with the PM.

Bettel was even more brutal as the press conference continued. Brexit, he said, was a “homemade” problem that the EU and everyone else is being forced to accept.

Luxembourg PM Xavier Bettel says “some people would love to give the blame to another” over #Brexit, as Boris Johnson pulls out of a press conference over protestshttps://t.co/M3fYrDlBfa pic.twitter.com/TEbOHzi5UP

Bettel’s press conference was extraordinary and yet another example of just how bizarre the Brexit situation has gotten. European leaders have chastised the UK in the past, but they’ve tried very, very hard not to involve themselves in or comment on the UK’s internal political dysfunction.

This was an unexpected break with that tradition, a rare show of the anger and frustration over Brexit that seems to be permeating discussions among EU leaders these days.

It makes sense. There are just six weeks to go until the Brexit deadline of October 31 and the UK is still angling for concessions on a Brexit deal — concessions the EU has said so many goddamn times it’s not willing to give. And Johnson still looks ready, even eager, to just crash out of the bloc without an agreement, flinging the UK and the rest of the 27 EU countries into potential economic chaos.

So the stakes really couldn’t be higher. And while anti-Brexit people likely found Bettel’s frank words inspiring — the anti-Brexit protesters at the event actually applauded some of Bettel’s best lines — these sorts of media spectacles aren’t going to make solving Brexit any easier.

It began with an interview Johnson gave to the Daily Mail ahead of this trip where he insisted that he’s trying to reach a Brexit deal and that progress was being made in talks.

But he also compared Britain (and himself, to a degree) to the Incredible Hulk, the green superhero of Avengers fame known for getting angry and breaking things.

Johnson said that Britain would break free of the European Union, just like the Hulk always breaks free of his manacles: “Hulk always escaped, no matter how tightly bound in he seemed to be — and that is the case for this country. We will come out on 31 October and we will get it done,” Johnson said, adding that “the madder Hulk gets, the stronger Hulk gets.”

Of course, his comments were immediately ridiculed, including by the actual Hulk himself, actor Mark Ruffalo, who played the green superhero in the Avengers film franchise.

Boris Johnson forgets that the Hulk only fights for the good of the whole. Mad and strong can also be dense and destructive. The Hulk works best when he is in unison with a team, and is a disaster when he is alone. Plus…he’s always got Dr. Banner with science and reason. pic.twitter.com/jN8BDzgpWl

It also (presumably) generated a gigantic sigh from EU leaders, who decided it was all very Trumpian and a sign that the UK was too busy making up superhero analogies to come up with, say, a realistic plan to avoid a hard border between Ireland and Northern Ireland.

The “working lunch” between Johnson and Juncker also apparently proved unfruitful, judging by the statement the European Commission released afterward saying that it’s the UK’s job to come up with solutions and “such proposals have not yet been made.”

Johnson also got booed a lot during his visit with Juncker and the other leaders by anti-Brexit protesters, which is what reportedly prompted him to pull out of the press conference with Bettel.

The BBC reports that Johnson had requested that the press conference be moved inside but the request was rejected. Either way, Twitter was quick to point out the irony that a person who just compared himself to the Hulk evidently couldn’t deal with a few noisy protesters.

Still, Bettel’s press conference without Johnson put the prime minister very much on the spot and revealed just how fraught these EU-UK Brexit negotiations have become.

But Bettel’s harsh words might do as much harm as good. There’s a reason the EU has been careful about commenting on the UK’s internal politics: It doesn’t want to be seen as meddling or trying to tip the scales in the Brexit debate.

Brexiteers will likely seize on Bettel’s antics as proof that the EU stubbornly doesn’t want to give the UK the deal it is asking for and that it’s doing everything possible to hurt the UK’s interests. That distrust is going to make it harder to sell any new Brexit deal — if it’s even possible to reach one.

We wiped out the flu this year. Could we do it again?
The surprisingly close Michigan Senate race, explained
Trump doesn’t think white nationalism is a threat — but data says otherwise
What the superrich want for the holidays: mummies, jaguar fur, and rose-gold airplanes
Democrats aren’t ruling out physical barriers in a border security deal
The tricky etiquette of giving a book as a gift