Brett Kavanaugh and the fatal weakness of normcore politics 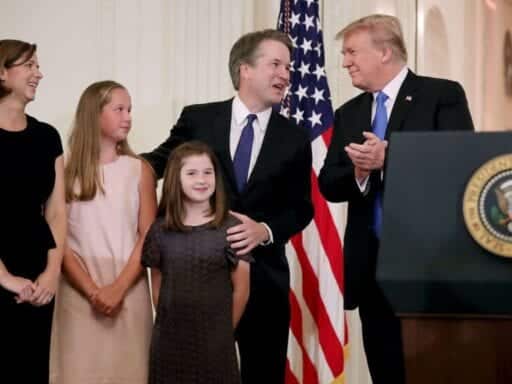 Donald Trump is not a normal president or, indeed, a normal person. But on Monday he did pick a normal conservative jurist to nominate to the Supreme Court, Brett Kavanaugh.

There’s something reassuring, perhaps, for liberals in this boring pick, even if they disagree with Kavanaugh’s positions. Perhaps a “normal” pick is a sign that American politics and government might be able to return to some semblance of functional democracy.

Under this mindset, the problem is Trump. He is at the center of American norms slippage. If he changes America changes. But that effort to place Trump’s sheer aberrancy at the center of American public life — a trend I’ve dubbed normcore politics — suffers from critical weaknesses. The fact that Kavanaugh is normal underscores how real the risk is to democracy. It doesn’t mitigate it.

The attacks on norms that many fear will outlast Trump’s presidency started long before he took office. And Kavanaugh supports them. His positions pose an immediate threat to voting rights and democratic regulation of the economy. They validate the years-long sequence of norm-shredding maneuvers by Mitch McConnell and total abdication of congressional oversight responsibilities that have brought us to this point. Normal is bad as not normal, or even worse.

But if you insist on viewing all of politics primarily through the lens of normal vs. not normal, you willfully blind yourself to the real threat.

Susan Hennessey is the executive editor of Lawfare, an overall indispensable publication on national security law. She has also become personally one of the clearest and most level-headed voices on the Trump-Russia question (see Part I and Part II of her podcast with Ezra Klein on this).

But Lawfare has also emerged as a hub of at times parodic levels of adherence to normcore politics, well captured by her tweets Monday night on Kavanaugh.

It can be hard for me to disentangle Trump as a true threat to the Republic from the Republican party with which I often strenuously disagree. I try to ask myself what Jeb or Mitt would do. If answer is same, then it’s just politics. /1

Any ordinary Republican president would be nominating Kavanaugh or Hardiman (or someone similar). Both are decent people who respect the rule of law. Both are significantly right of Kennedy and will reshape the court, I believe for the worse. /2

I wish a different president were picking someone else. I think what happened to Garland is deeply unjust. But I think it’s worth acknowledging—absurd Trumpian pageantry aside—tonight is politics as usual. /3

This is, obviously, correct.

The norm-shattering blockade of Merrick Garland’s nomination was “politics as usual” in the sense that it was unanimously agreed to by Republican Party senators. And the replacement of Anthony Kennedy by a much-more-conservative jurist who will substantially shift American public policy to the right is “politics as usual” in the sense that any Republican president would do the same. Indeed, the entire Kavanaugh cycle from working for Ken Starr to working on the Bush v Gore case to ensure that the popular vote loser would take office regardless to his ruling in favor of large-scale disenfranchisement in South Carolina is very normal.

More broadly, the Kavanaugh view that the Constitution grants powerless individuals little in terms of democratic participation but powerful interests much in terms of exemption from regulation is a very normal Federalist Society view.

But that’s exactly the problem. The American constitutional order is very robust against any effort by an eccentric madman to build a personalized dictatorship. But it’s very vulnerable to the efforts of a disciplined minority to entrench itself in power.

The American president wields an awesome amount of power owing primarily to the United States of America’s status as the world’s premiere economy and only true military superpower.

But in comparative politics terms, the presidency is a relatively weak office. Trump has proven himself unable to conjure up legislative majorities for his immigration policy ideas or budgetary flights of fancy. And even in areas where Trump has the formal constitutional authority to act unilaterally, congressional Republicans have powerful tools to check him, as Senator Cory Gardner (R-CO) showed when he acted decisively to protect Colorado’s legal marijuana industry against Jeff Sessions’ zeal. A very small number of Republican Senators or House members could, through concerted action, easily put the breaks on Trump’s personal corruption or ongoing efforts to conduct a partisan purge of the FBI if they wanted to.

But they don’t, because they unanimously don’t want to and a large minority of them want to actively help Trump.

And the reason they don’t want to check Trump is they see Trump’s presence in office as a useful way to advance their policy goals. “But Gorsuch!” became an early rallying cry for Republican regulars for a reason. Putting Gorsuch on the bench, and then Kavanaugh, and replacing Ruth Bader Ginsburg with Amy Barrett if the opportunity arises, and filling circuit court vacancies at a record pace, and all the rest are not minor things.

A $1.5 trillion dollar tax cut and the potential invalidation of Environmental Protection Agency regulation of greenhouse gas emissions is certainly ordinary politics in the sense that it would be happening with Jeb Bush or Marco Rubio in the White House, but there’s nothing “just politics” about it. These are questions on which fortunes are made and lives are lost, and not only does normal politics offer Republicans a compelling reason to back Trump’s regime it legitimizes fundamentally anti-democratic stances that keep them in office.

Republicans have thrown in the towel on Trump

It’s striking that, at the end of the day, the outcome of November’s struggle for majority control of the House of Representatives is in doubt reflects not uncertainty about the vote totals but the extent of gerrymandering that leaves most observers believing Democrats need to win by six or seven points in order to control the House.

And it’s also striking that in his very first remarks to the American people, Judge Kavanaugh chose to tell a bald-faced lie that strikes to the core of the American constitutional system.

Brett Kavanaugh to @POTUS: “I have witnessed firsthand your appreciation for the vital role of the American judiciary.” https://t.co/gESqJwfTQI pic.twitter.com/hWAe8tPalV

When Sean Spicer stepped out in front of the cameras on his first day as White House Press Secretary to tell obvious lies it was a shocking scene and it was received as such. Eighteen months later, we have future Supreme Court justices doing it.

A great many Republicans — including many in congress and many of his own appointees — find this or that aspect of Trump’s conduct to be regrettable on one or more levels. But the party has, as a whole, made a collective and unanimous decision that they are all on the same team and fighting for the same cause. It’s a cause they’ve given up on securing majority support for, but believe can be effectively advanced through gerrymandering, filibusters, judicial review, vote-suppression, cable news propaganda, etc., and it’s high time to take them at their word that, all things considered, they think this is a good way to go.