Brett Kavanaugh was asked about abortion in his confirmation hearing. His answer tells us nothing. 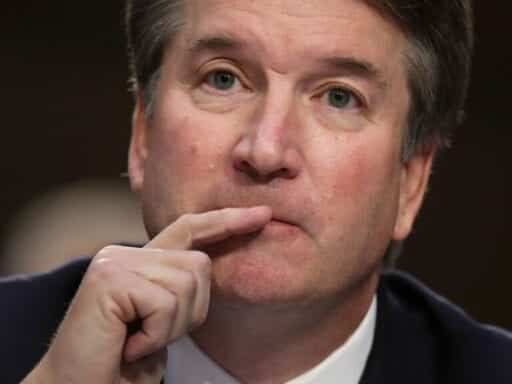 “I understand the importance of the precedent set forth in Roe v. Wade,” he testified. That says nothing about how he’d rule.

It was one of the most anticipated questions ahead of Brett Kavanaugh’s Supreme Court confirmation hearings.

“Do you agree with Justice [Sandra Day] O’Connor that a woman’s right to control her reproductive rights affects her ability to ‘participate equally in the economic and social life of the nation’?” Sen. Dianne Feinstein (D-CA) asked Kavanaugh on Wednesday.

The question got at one of reproductive rights advocates’ biggest fears about a Kavanaugh confirmation: that the new justice would provide the deciding vote to overturn the landmark abortion decision Roe v. Wade. Kavanaugh had reportedly told Sen. Susan Collins (R-ME) in an August meeting that he considered Roe “settled law,” but advocates have said this has little meaning, since the Supreme Court decides what “settled law” is.

And in the hearing on Wednesday, Kavanaugh offered only vague answers to Feinstein’s questions. “As a general proposition,” he said, “I understand the importance of the precedent set forth in Roe v. Wade.” Such responses might be enough to give Collins and Sen. Lisa Murkowski (R-AK), pro-abortion rights moderates who are seen as the swing votes in the confirmation process, an excuse to vote yes. But they tell Americans little about what Kavanaugh would actually do on the court.

Kavanaugh repeatedly fell back on “precedent”

During her questioning, Feinstein brought up the realities of illegal abortion in the days before Roe, a subject she also touched on in her opening statement on Tuesday. “In the 1950s and ’60s, the two decades before Roe, death from illegal abortions in this country ran between 200,000 to 1.2 million,” she said on Wednesday, citing the Guttmacher Institute. Given such statistics, she asked, “What do you mean by settled law?”

“It’s settled as precedent of the Supreme Court,” Kavanaugh said. “One of the important things to keep in mind about Roe v. Wade is that it has been reaffirmed many times.”

Feinstein pressed for specifics, saying that knowing “how you make a judgment on these issues is really important to our vote as whether to support you or not. Because I don’t want to go back to those death tolls in this country.”

But Kavanaugh remained vague, saying he understood “how passionately and how deeply people feel about this issue.”

“I understand the importance that people attach to the Roe v. Wade decision,” he added.

Pressed again, Kavanaugh said that Roe had been reaffirmed in Planned Parenthood v. Casey, the 1992 decision that established that laws could not place an “undue burden” on a person’s right to an abortion. Casey, he said, was “precedent on precedent.”

Kavanaugh was saying that Roe was not a one-off decision, but had been reaffirmed many times, most notably in Casey. To some, that might indicate an unwillingness to reconsider Roe. But as Feinstein noted in her opening statement on Tuesday, Kavanaugh has been open to going against precedent in the past where abortion rights are concerned.

Reproductive rights advocates were expecting him to fall back on talk of precedent — and they warned Americans not to be convinced.

“A lot of terms like ‘settled law’ or ‘respecting precedent’ are troubling,” Gretchen Borchelt, the vice president for reproductive rights and health at the National Women’s Law Center, told Vox in an interview last week. “They don’t actually tell you his views, and they’re code words for people who want to see that precedent be overruled.”

Ultimately, saying that he understands why people care so much about Roe v. Wade doesn’t tell Americans anything about how Kavanaugh would actually rule. Potentially more informative: President Trump’s promise that, if elected, he would appoint anti-abortion justices to the Supreme Court.

2020 Democrats on who controls your data — and who’s at fault when it’s mishandled
The debate’s segment on race was doomed before it even began
Boris Johnson wins major victory in UK elections
Read: Mueller indictment against 12 Russian spies for DNC hack
The only remaining check on Trump is the 2020 election
“A Juneteenth like no other”: Juneteenth celebrations take on a special meaning this year