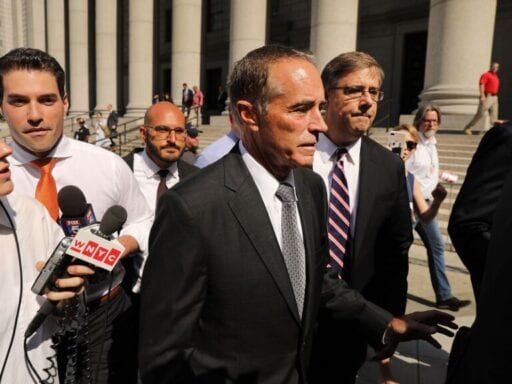 Collins and two other men were arrested for insider trading with regard to Australian biotech company Innate Immunotherapeutics in 2017.

New York Republican Rep. Chris Collins, who was arrested on insider trading charges this week, is suspending his re-election bid, he announced on Saturday.

In a lengthy statement posted on Twitter, Collins said he had decided that it is in the “best interests” of his constituents in New York’s 27th District, the Republican Party, and the president’s agenda for him to suspend his campaign.

“Democrats are laser focused on taking back the House, electing Nancy Pelosi Speaker and then launching impeachment proceedings against President Trump,” Collins said. “They would like nothing more than to elect an ‘Impeach Trump’ Democrat in this District, which is something that neither our country or my party can afford.”

Collins, his son Cameron Collins, and the father of his son’s fiancée, Stephen Zarsky, were arrested by FBI agents early Wednesday morning on charges that Collins shared non-public information about Australian biotech company Innate Immunotherapeutics in the summer of 2017. Collins was a major shareholder of the company and a member of its board. According to the federal government’s indictment, Collins told his son about negative results from a clinical trial for the company’s multiple sclerosis drug before they were made public, allowing his family members to avoid nearly $800,000 in potential losses.

“Collins, who, by virtue of his office, helps write the laws of this country, acted as if the law did not apply to him,” US Attorney Geoffrey Berman said at a news conference discussing the indictment, which charges Collins, his son, and Zarsky with 13 counts of wire fraud, securities fraud, and making false statements to the FBI.

All three men pleaded not guilty, and Collins’s lawyers said he would be “completely vindicated and exonerated.”

Collins reiterated in his statement on Saturday that he looks forward to “having my good name cleared of any wrongdoing.” But his decision not to seek reelection seems to indicate that Collins, the first member of Congress to back Donald Trump’s presidential campaign, might not be so confident — or is at least aware it’s not a good look for him to stay on the ballot.

Exactly how Collins will get his name off of the ballot and someone else’s on it is not entirely clear. As Kyle Cheney and Jimmy Vielkind at Politico explain, New York law stipulates that Collins’ name can be supplanted on the ballot at this stage only if he dies, moves out of state, or is nominated for another office. Collins owns houses in Florida and Washington, DC, so moving out of state could, potentially, be an option. Republican leaders from the eight counties Collins represents will meet to select a replacement.

Collins has had some ethics issues for a while

Collins and his ties to Innate Immunotherapeutics have been under the microscope for quite some time.

As Vox’s Tara Golshan points out, the Office of Congressional Ethics last October reported that it found “substantial reason to believe” that Collins, who sat on the House Energy and Commerce Committee, was using his position to personally benefit the company and solicit investors. Collins was reportedly overheard bragging about how much money he had made other members of Congress by tipping them off about investment opportunities.

OH in the speaker’s lobby: ‘Do you know how many millionaires I’ve made in Buffalo the past few months?’ –@RepChrisCollins on his cellphone

Collins has been a loyal Trump supporter since endorsing him in 2016. He supported him when the Access Hollywood tape came out, was named to Trump’s transition team, and has stayed in contact with the president since. The day Collins tipped his son off about the clinical trial failure, he attended a picnic at the White House.

Thus far, however, President Trump has not weighed in on the arrest.

All the near-total abortion bans passed this year have now been blocked in court
US warns Americans not to travel overseas — and to try to get back now
Border chief explains why there have been no ICE raids at Trump properties
The UK backs away from “herd immunity” coronavirus proposal amid blowback
Iran attacks 2 US military targets in Iraq: What we know so far
Trump’s push for South Carolina Republicans to vote for Sanders went unheeded