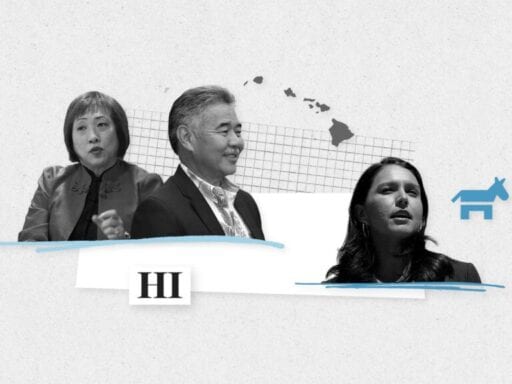 A nuclear false alarm has put an incumbent governor in danger.

This Saturday, August 11, voters in Hawaii will choose the Democratic nominees — and the likely eventual winners — in highly contested primary elections for governor and Congress.

Hawaii is a solidly blue state and went to Hillary Clinton by more than 30 points in 2016. The victors of Saturday’s Democratic primaries are thus heavily favored to win in November’s general election. That makes the primaries the most competitive elections of the year, and with Hawaii’s long history of volatile and difficult-to-poll primaries, there could be some major surprises.

The controversial Democratic Congress member for the Second District, Tulsi Gabbard, faces a number of challengers but enters the primary as a heavy favorite. There is also an open seat in the Hawaii First, with a competitive Democratic primary. US Sen. Mazie Hirono has no Democratic competition, but Republicans will have to choose a sacrificial lamb from a large field that includes a Lyndon LaRouche follower and a guy who lives in California.

Incumbent Gov. David Ige, who unseated his predecessor Neil Abercrombie in the Democratic primary four years ago, faces stiff competition from Rep. Colleen Hanabusa, a veteran Hawaii politico who served 12 years in the state Senate (two as Senate president) and is now in her second stint representing the First Congressional District.

Ige’s popularity has plummeted due to his handling of a false alarm sent to Hawaii residents in January telling them a ballistic missile was incoming (he said he would’ve alerted the public that it was a false alarm earlier but he forgot his Twitter password). The race has centered less on policy disputes than on the question of Ige’s and Hanabusa’s relative levels of competence.

Hanabusa has had a series of tough losses in the 2010s. First, in 2010, when Abercrombie resigned from the First District seat in Congress to run for governor, Hanabusa ran in a special election to replace him. But Ed Case, a center-right Democrat who represented the Second District (covering some suburban parts of Oahu as well as every other Hawaiian island) from 2002 to 2007, ran too, positioning himself as a moderate Democrat to Hanabusa’s progressive. Case and Hanabusa split the vote, letting Charles Djou, a Republican, win. Hanabusa went on to beat Djou for the seat in the 2010 general election.

In late 2012, shortly before long-time Sen. Daniel Inouye died, he requested that Abercrombie name Hanabusa as his successor. Abercrombie refused and gave the position to Brian Schatz, his lieutenant governor. Hanabusa, with the support of the Inouye family, challenged Schatz for the job in 2014, losing by a razor-thin margin.

She gave up her House seat for that race but won it back in a 2016 special election when her successor, Mark Takai, died of pancreatic cancer. Now she’s abandoning her seat yet again to challenge Ige. The state’s Democratic power structure has split on the race, with Rep. Tulsi Gabbard, former Sen. Daniel Akaka, former Govs. Benjamin Cayetano and George Ariyoshi, and even Ige’s own former Lt. Gov. Shan Tsutsui (who resigned in frustration with Ige) backing Hanabusa. But some powerful unions like UNITE HERE (which represents many hotel workers in a state whose main industry is tourism) are still supporting Ige.

The final poll before the election, by the Honolulu Civil Beat, found Ige ahead by 9 points; a few weeks earlier, the Honolulu Star-Advertiser had him ahead by 4. Mere months earlier, in the wake of the nuclear false alarm, Hanabusa led by as much as 20 points, but she lost ground as the incident faded from memory.

Hanabusa is giving up her seat in Congress to run against Ige, and the Democratic contest to succeed her in the Hawaii First, which covers Honolulu’s urban center and some neighboring suburbs on the island of Oahu, is beyond crowded.

The frontrunner in two recent polls is … Ed Case, the moderate Democrat who split the vote with Hanabusa back in 2010. He’s a frequent candidate, losing Senate primaries in both 2006 and 2012 after attracting little establishment support, but he has strong name recognition both from his prior stint in Congress and because of his membership in the prominent Case family (his cousin Steve is the billionaire founder of AOL).

In the Hawaii Second District’s Democratic primary, Tulsi Gabbard is a heavy favorite to be renominated. An Iraq War veteran, dedicated non-interventionist, and early endorser of Bernie Sanders’s presidential bid, Gabbard has attracted substantial national popularity but also criticism for her choice to meet with Syrian despot Bashar al-Assad in 2017; she has also refused to acknowledge that Assad is responsible for chemical weapons attacks against civilians. She has also endorsed blocking refugees from Syria and Iraq, supported Egyptian dictator Abdel Fattah el-Sisi, and backed India’s far-right leader Narendra Modi.

Gabbard’s enthusiasm for dictators was enough to help lead the Hawaii teachers union to endorse Sherry Campagna, Gabbard’s most prominent challenger. But Gabbard has refused to debate her opponents, preventing them from getting much traction, and is likely to win in a walk.

The second White House coronavirus outbreak: Mark Meadows, the Secret Service, and more
Pennsylvania Supreme Court rules mail-in ballots can’t be rejected over mismatched signatures
The Supreme Court decides not to make the Electoral College even worse
Can US companies solve the Trump tariff problem by manufacturing in the US? It’s complicated.
Why the CDC changed its Covid-19 quarantine guidelines
Is it okay to sacrifice one person to save many? How you answer depends on where you’re from.