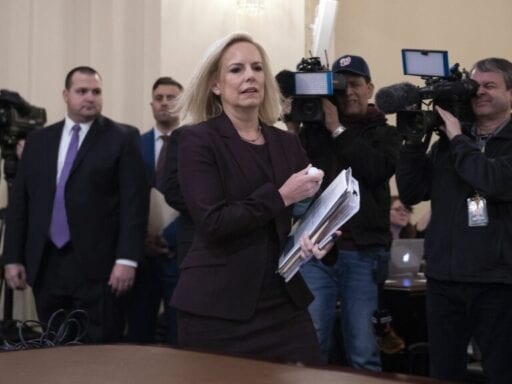 “Sir, they are not cages, they are areas of the border facility that are carved out for the safety and protection of those who remain there while they’re being processed,” Nielsen said during an exchange with House Homeland Security Committee Chair Bennie Thompson (D-MS).

“Does it differ from the cages you put your dogs in when you let them stay outside?” Watson Coleman asked.

“Yes … it’s larger, it has facilities, it provides room to sit, to stand, to lay down —”

“So does my dog’s cage,” Watson Coleman interjected.

.@RepBonnie: What is a chainlink fence enclosed into a chamber on a concrete floor? A cage?@SecNielsen: It’s a detention space, mam

REP BONNIE: Is it different from what you put dogs in?

REP BONNIE: In what sense?

I saw them with my own eyes. They’re cages. With children in them. https://t.co/EP7z4CeUwu

More than 2,700 children were separated from their parents and detained by CBP last year. Though President Donald Trump ended the practice with an executive order last summer, government data released last month indicated about 250 parents had been separated from their children since last June.

During the hearing on Wednesday, Nielsen confirmed that some parents were deported without their children, but added that “there was no parent who has been deported to my knowledge without multiple opportunities to take their children with them.” Following the hearing, however, Rep. Kathleen Rice (D-NY) posted a tweet accusing her of lying about that.

This is a lie.

Lying to Congress under oath is a felony.

The last person who did that is going to prison. https://t.co/bbjVS4uGGc

Nielsen also testified that three children have died in CBP custody “so far this year.”

Nielsen’s comments about cages weren’t the only ones that didn’t go over well with Democrats on Wednesday. At another point, she bizarrely refused to admit that a demonstrable falsehood Trump pushed during a recent trip to the US-Mexico border about how there have “never [been] so many apprehensions ever in our history” at the border is, in fact, false.

“I don’t have the full context of that,” Nielsen said, after Rep. James Langevin (D-RI) pressed her to simply admit Trump was wrong.

“I’m just trying to get a ‘yes’ or a ‘no,’ it seems self-evident,” Langevin replied. “Is the president misleading the American people?”

Presented with facts about how Trump has misled the American people about the number of migrants apprehended at the border, @SecNielsen makes a desperate attempt to spin Trump’s comments pic.twitter.com/HflLWO9NqB

Nielsen also had a hard time explaining the Trump administration’s recent crackdown on asylum seekers. As Vox’s Dara Lind detailed, asylum seekers are increasingly being forced to wait in Mexico before their cases are heard:

Since late January, the Trump administration has turned back some Central American asylum seekers to wait in Mexico while their cases are processed. It’s an unprecedented response to what the Trump administration sees as its biggest problem: the fact that growing numbers of people are coming to the US without papers who can’t be summarily detained and deported.

By returning them to wait in Mexico, the administration is allowing them to pursue court cases in the US without actually admitting them.

Over the past month, the new policy ramped up slowly at a single border crossing. Now the unofficial pilot program is over, and the wider adoption of returns to Mexico has begun.

Asylum seekers are generally allowed under US law to claim asylum on US soil. During Wednesday’s hearing, Rep. Nanette Barragán (D-CA) berated Nielsen about the way they’re being treated.

Administration officials “don’t want the American people knowing what is happening at that Southern border,” Barragán told Nielsen, alluding her own experiences when she traveled to the border and witnessed the asylum process first-hand. “And Madam Secretary, I don’t know if you know what’s happening, or if this is happening without you know, but it’s totally unacceptable.”

Wow. @RepBarragan berates Nielsen over her apparent lack of knowledge of US asylum law. pic.twitter.com/mYAo5MMZB5

At other points, Nielsen dodged questions about her dubious testimony last year that the Trump administration never had a family separation policy, admitted she’s broadly unfamiliar with research indicating kids are traumatized by being separated from their parents, and struggled to explain how the border wall the Trump administration is still pushing for would curtail the flow of smuggled drugs — most of which come through ports of entry.

Tasked with defending the indefensible, Nielsen is in an impossible position. But if Wednesday is any indication, with Democrats now in control of the House and eager to conduct oversight, she’s in for more grueling hearings over the next couple years.

There are indications that Nielsen knew she would be in for a tough time on Wednesday. CBS reported that committee Chair Thompson had threatened to subpoena Nielsen to compel her to testify before she agreed to appear voluntarily. Democrats, of course, didn’t have that power prior to flipping 40 seats and taking control of the House following November’s elections.