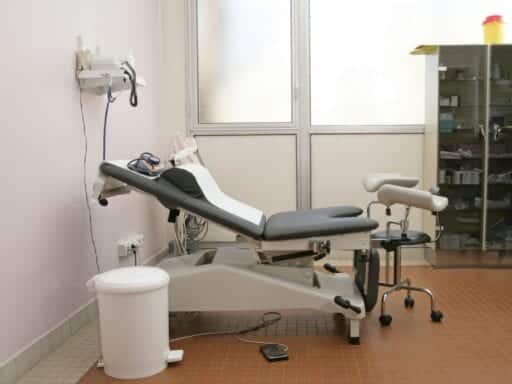 It’s part of a bigger problem.

More than a million girls and young women have gotten an unnecessary medical procedure in recent years that could traumatize them or jeopardize their ability to carry a pregnancy to term.

That procedure is the Pap test, a common way of screening for cervical cancer. For some patients, the test can be an important way to catch abnormal cells that could turn cancerous. But it’s not recommended in women under 21, because bodies before that age are very likely to clear the abnormal cells on their own.

Despite the recommendation, however, a study published this week in the journal JAMA Internal Medicine estimates that 1.6 million girls and women between the ages of 15 and 20 were given the test unnecessarily between 2011 and 2017. The consequences could be serious: The exams, which require a doctor to take a small amount of tissue from the cervix, could be traumatic for people who have experienced sexual abuse. And overtesting could lead to treatment of cervical lesions that would have resolved on their own — which could raise patients’ risk of giving birth prematurely later in life.

“We’re constantly trying to figure out how to balance benefits and harms when it comes to prevention, and sometimes less is more,” Dr. George Sawaya, the study’s senior author, told Vox.

It’s not entirely clear why so many girls and women are getting unnecessary tests. But one possible reason is doctors’ fear that if patients are required to get a yearly Pap test, they won’t come in for care at all.

In reality, doctors and reproductive health advocates say fear of Pap tests and pelvic exams keeps patients away from the doctor’s office. And many argue that subjecting people to unnecessary tests isn’t the way to promote public health.

“No one’s ability to get health care should be held hostage to an invasive procedure,” Kimberly Inez McGuire, executive director of the group URGE: Unite for Reproductive & Gender Equity, told Vox.

Pap tests and pelvic exams aren’t recommended for most teens. Doctors are doing them anyway.

Invented in the 1920s, the Papanicolaou (Pap) test became common in the 1940s as an annual screening for cervical cancer. It is done by inserting a speculum into the patient’s vagina, then gathering cells from the cervix. The cells are then tested for abnormalities that could lead to cancer. It’s been highly effective — between 1955 and 1992, the death rate from cervical cancer in the US declined 70 percent.

But in recent years, experts have questioned whether the test really needs to be performed every year, for every patient.

In 2009, the American College of Obstetricians and Gynecologists issued new guidelines stating that there was no need to perform the test on most patients younger than 21 (previously, ACOG recommended that patients start getting tested three years after they became sexually active). For most patients over 21, ACOG recommended the test every two to three years rather than every year. (Today, ACOG says many patients 30 and over can be tested every five years, if they get an HPV test along with the Pap.)

Patients with HIV or certain other conditions may still need to be screened more often, ACOG notes. And the group still recommends that girls and women have an annual visit with an OB-GYN for testing and counseling around sexual health and other issues.

The Pap test is often performed along with a pelvic exam, in which a doctor inserts two fingers into the vagina and feels the reproductive organs to look for signs of sexually transmitted infections or other conditions. In 2009, ACOG also recommended that pelvic exams not be performed on patients under 21, except in special cases. The exam is often unnecessary, experts say, because doctors can use less invasive methods, like a urine test, to screen for STIs.

But according to the new study by Sawaya and his team, a lot of doctors didn’t get the message.

In a nationwide survey conducted between 2011 and 2017, about 2.2 million girls and young women between the ages and 15 and 20 said they had gotten a Pap test in the past 12 months. Sawaya’s team found that for about 1.6 million of those patients, the test was potentially unnecessary, meaning there was likely no high-risk condition warranting it.

The researchers also found that 2.6 million patients in that age group had received a pelvic exam in the past 12 months, and that 1.4 million of those exams had no compelling medical reason.

These tests aren’t just unwarranted, the researchers say — for some patients, they can be actively harmful. Many young patients associate pelvic exams with “fear, anxiety, embarrassment, discomfort, and pain,” Sawaya and his team write.

Those effects can be even more severe in survivors of sexual assault, people who have experienced traumatic births, and people who have experienced discrimination from health care providers, like trans or nonbinary patients, McGuire, the URGE executive director, said. For survivors of sexual assault, “it may take a whole series of support conversations, and bringing someone with you, and a ton of courage to be able to go and get a Pap test,” she said. “If it is not strictly necessary, if it is not protecting their health, then it is causing harm.”

Meanwhile, unnecessary Pap tests can lead to unnecessary treatment of abnormalities that might have gone away on their own. Surgery to remove such abnormalities has been linked to premature birth and low birth weight if patients later get pregnant, one of the reasons ACOG changed its guidelines in the first place.

These unnecessary procedures could also be driving up costs for insurers and patients — the authors estimated that unnecessary pelvic exams and Paps cost more than $123 million a year.

Overall, the study is a reminder of the inequalities in the American health care system, McGuire said. One the one hand, large numbers of young people every year are being subjected to unnecessary procedures. On the other hand, many people of all ages, especially low-income Americans and people of color, are unable to access Pap tests and other reproductive health care because of lack of insurance, distance to a clinic, and other barriers. Black and Latina women are more likely to get cervical cancer than women of other races and ethnicities, and lack of screening is likely a factor, according to the Centers for Disease Control and Prevention.

“There are folks who have waited years and struggled just to get one Pap smear,” McGuire said.

In cases where people are getting too much care rather than not enough, it’s not clear why doctors are continuing to perform unnecessary tests. “It’s probably people just following the script of what they learned many years ago,” Sawaya said.

Another possible reason for the resistance: When the new guidelines were first introduced in 2009, some doctors were worried that if patients heard they didn’t need yearly Paps, they wouldn’t come in for other necessary care, like STI testing.

Sawaya says he still hears that concern from doctors today, but he and others say it’s misguided. “From my experience, patients are often deterred from, not drawn to, clinic by the prospects of a pelvic exam,” Dr. Mai-Anh Tran Ngoc, an adolescent medicine specialist and a fellow with Physicians for Reproductive Health, told Vox in an email.

Meanwhile, the idea that girls and young women need to be pushed into health care with treatments that aren’t necessary “speaks to a kind of condescension that is unfortunately all too prevalent in the medical establishment,” McGuire said.

As coronavirus cases increase worldwide, an Australian state is imposing tough new restrictions
This nurse is treating the sickest coronavirus patients. Trump still wants to deport him.
21 kids sued the government over climate change. A federal court dismissed the case.
There’s never been a better year to deep-fry a turkey
Senate Republicans were never going to vote for witnesses
Trump’s final two months in office might be the worst Covid-19 months yet