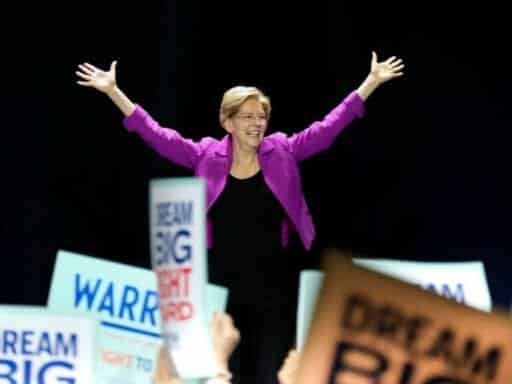 The Working Families Party backed Sanders in 2016. This time around, it’s supporting Warren.

A progressive political group that backed Bernie Sanders in 2016 is backing Elizabeth Warren this time around.

On Monday, the Working Families Party, a grassroots political group, announced that it would back Warren in the 2020 Democratic presidential primary. After a three-month decision process, Warren got 60 percent of WFP’s vote and Sanders garnered 35 percent. Half of those votes are determined by WFP leaders and the other half by its members.

This is a big deal for Warren: WFP has local branches and works closely with unions, activists, and organizations across the country. It has real connections and resources that will be valuable to the Massachusetts Democrat’s campaign.

Somewhat understandably, then, the endorsement has not been well met by Sanders’s supporters, who view it as a betrayal of his past work with the party. In 2016, Sanders sent an email to his New York supporters urging them to vote for Hillary Clinton on the Working Families Party line on their ballots. In the same email, he described WFP as “the closest thing there is to a political party that believes in my vision of democratic socialism.”

WFP appears to have anticipated the potential blowback. In a press release announcing the decision, WFP national director Maurice Mitchell emphasized that people are “lucky to have two strong progressive candidates leading in the race.” Mitchell continued, “Senator Warren and Senator Sanders have both shaped the ideological terrain on which this campaign is being waged. They have proven an effective team on debate stages and in the polls, and we hope that partnership continues. We’re proud to call both of them allies in the fight for a more just America.”

Nelini Stamp, director of strategy and partnerships at WFP, told me the decision process “wasn’t easy” for the party’s members, but many of them are really excited about Warren.

“She’s got a record on housing, fighting the big banks, creating the CFPB, having accountability, having people actually attack her for her leadership in that, and I think that means something to people,” she said. “We care about getting in early and organizing for what our members and institutions decided as a whole … and they decided to endorse Elizabeth Warren.”

Sanders campaign manager Faiz Shakir in a statement to Vox also tried to turn down the temperature around the endorsement. “The Bernie Sanders campaign is built from the support of millions of working people across the country, with our leading donors being Walmart workers, teachers, and nurses,” he said. “We look forward to working with the Working Families Party and other allies to defeat Donald Trump. Together, we’ll build a movement across the country to transform our economy to finally work for the working class of this country.”

Warren thanked the party for its endorsement on Twitter. She also tweeted a video of herself quietly celebrating on a train.

What cheering in the Quiet Car looks like. Thanks @WorkingFamilies! pic.twitter.com/kuPZlWBlbp

Sanders supporters and some vocal figures on the left have, unsurprisingly, been less than pleased with WFP’s endorsement.

Bhaskar Sunkara, founder of socialist magazine Jacobin, in a tweet said the move was “baffling.” He added, “Bernie is the national manifestation of WFP’s politics. The fact that WFP doesn’t recognize that reflects how much it has strayed.”

The @WorkingFamilies has changed New York politics fundamentally and for the better but their decision to endorse Warren is baffling.

Bernie is the national manifestation of the WFP’s politics. The fact that the WFP doesn’t recognize that reflects how much it has strayed.

The Working Families Party’s endorsement of Elizabeth Warren is a real shame.

WFP solely exists to promote the Democratic Party no matter what. They were never going to endorse Sanders. No point getting upset over it.

Just another episode in the generations-long drift of labor parties away from the working class!

This isn’t first time WFP has ignited some anger with its endorsements — and misfired in the eyes of some progressives. Its state party voted to endorse New York Gov. Andrew Cuomo over Fordham law professor and progressive firebrand Zephyr Teachout in 2014. And in 2018, WFP backed incumbent Joe Crowley over Alexandria Ocasio-Cortez in their primary.

Stamp brushed aside criticism from those pointing that out. “There is something wrong when people are comparing Joe Crowley to Elizabeth Warren,” she said.

Beyond Warren and Sanders, the other candidates under consideration for endorsement were Julián Castro, Cory Booker, and Bill de Blasio. WFP dropped Kamala Harris from the mix in August after her campaign said she would skip a Q&A session.

WFP employs a ranked-choice voting system for endorsements, meaning people rank their preferences from first to last. Vote share is divided 50-50 between WFP’s national committee and WFP members and grassroots supporters. The party doesn’t release separate tallies, meaning we don’t know if there’s a big schism between WFP’s leaders’ preference and its membership base. There have been calls for WFP to publicize how the vote shook out, but they’re saying no.

“People are going to be angry that the candidate they wanted to see get the nod didn’t. We understand why people are angry,” Stamp said.

The 2020 race is starting to heat up, and it shows

In an interview with the New York Times, Mitchell emphasized that making an endorsement decision right now isn’t just about Warren, Sanders, or whatever candidate the group is going to back — it’s also about organizing against the current frontrunner, Joe Biden. He’s encouraging other progressive groups to get off the sidelines, pick a candidate, and start pushing back against the former vice president as well.

“If our focus is on victory, we can’t be delusional about it,” he told the Times. “You don’t defeat the moderate wing of Democrats through thought pieces or pithy tweets, you defeat their politics through organizing.”

As the Times notes, coveted endorsements from unions such as the American Federation of Teachers and the Service Employees Union haven’t yet come through. Sanders did pick up an endorsement from the United Electrical, Radio, and Machine Workers of America.

Earlier this year, Democratic Socialists of America endorsed Sanders. As with this scenario, the move was not without controversy: Some of DSA’s members had asked the group’s leadership to withhold its endorsement over the Vermont senator’s stance on reparations. (The independent Vermont senator has declined to back reparations for the descendants of the enslaved in the United States, arguing that broader anti-poverty programs will help address inequality and that it’s not clear what the term “reparations” means.) DSA’s members had already voted 76 percent to 24 percent to endorse Sanders, and the organization’s leaders went ahead.

Thus far in the 2020 primary, Warren and Sanders, who are longtime allies, have avoided confrontation with one another. They have remained focused on their more moderate opponent, Biden, and have worked in tandem to push forward a progressive message on the campaign trail. But as the calendar accelerates and primary season approaches, the stakes are beginning to feel higher. Controversies like this one are going to become the norm, rather than an aberration.

Whatever happened to the classic teen summer job?
Game of Thrones’ finale revealed Jon and Dany’s story was a tragic one
Trump says selling weapons to Saudi Arabia will create a lot of jobs. That’s not true.
Genetics has learned a ton — mostly about white people. That’s a problem.
Back-to-school shopping has gotten easier — but at whose expense?
The two competing stimulus proposals, explained