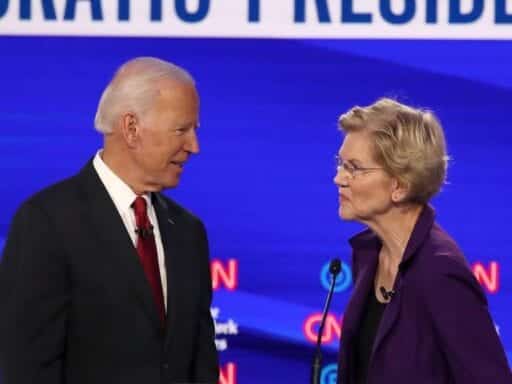 Elizabeth Warren is crushing Joe Biden when it comes to donations from employees at Silicon Valley’s largest tech companies — despite her pledge to break many of them up.

Warren raised five times as much from Big Tech as Joe Biden did in the third quarter of this year, according to Recode’s analysis of recently disclosed fundraising records. It’s a sign of both how popular Warren is increasingly in Silicon Valley and of Biden’s own fundraising weaknesses in the industry.

Warren collected about $150,000 from employees of Facebook, Apple, Amazon, Microsoft, and Alphabet between July and September — outpacing any other Democratic candidate. While measuring donations from a few tech companies specifically is an imperfect way to assess total support from the entire sector, it does offer one snapshot of the industry’s leanings. Warren, Bernie Sanders, and Pete Buttigieg outraised the rest of the Democratic field in total money, in that order.

Almost half of Warren’s tech money came from Alphabet-owned entities like Google and YouTube. Although Warren has sharply criticized these companies, she has enjoyed a boom in tech support in recent months as Silicon Valley measured her up. Tech donors are not primarily driven by tech policy, but some Alphabet employees have previously told Recode that they actually think Warren’s positions could be good for their company and society.

Warren’s success is even more impressive given that she has not done high-dollar fundraisers with her party’s most well-heeled contributors, including many fans in Silicon Valley who are desperate for access to her. Just this week, she pushed Silicon Valley even further away when she promised to not raise money from tech “executives” — and even to return qualifying donations that she has already received.

Biden’s struggles here reflect his trouble tapping into tech wealth more broadly. While Biden has raised money in Silicon Valley from people with ties to the Obama administration and other wealthy individuals who call the Bay Area home, he has encountered challenges connecting with up-and-coming entrepreneurs and brand-name tech donors. The former vice president has visited the Bay Area twice for high-dollar fundraising events and is expected to return before the end of the year for a third trip.

Biden brought in just over $30,000 from employees at those five companies in the third quarter.

Other strong tech fundraisers include Buttigieg, who has visited Silicon Valley perhaps more often than any other candidate. (His husband, Chasten, is returning at the end of the month for a unique Hamilton fundraising event.) Buttigieg raised over $100,000 from Big Tech employees in this quarter. Sanders, who has also indicated that he’s open to the idea of breaking up big tech companies, collected almost $130,000 from company employees.

And somewhat surprisingly, Andrew Yang, who has his own personal ties to the tech community, was the fourth-best fundraiser among Big Tech employees. Yang collected almost $90,000 from them during the third quarter.