Zombieland: Double Tap is an adequately fun throwback to a bygone era (of 2009) 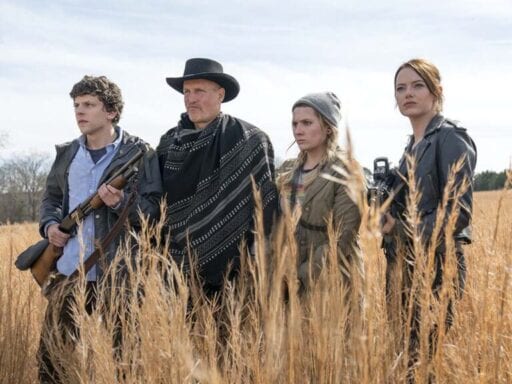 The original cast of Zombieland reunites for more undead slaughter in a sequel that feels like a time capsule.

It’s been a long, long, long time since 2009. That was the year of Barack Obama’s inauguration. The year when swine flu became a global pandemic, and Michael Jackson died. The Marvel Cinematic Universe was still in its infancy; 2009 was the last year in which no Marvel movies were released, and only two had come out prior (Iron Man and The Incredible Hulk, a.k.a. the one with Ed Norton). 2009 was when Kanye West interrupted Taylor Swift at the VMAs. When bitcoin was born. When Jersey Shore premiered.

At the box office, Avatar was the top-grossing movie of 2009, but the biggest comedy was The Hangover, directed by Todd Phillips (who a decade later would be winning prestigious awards and starting controversies with Joker). Compared to The Hangover’s $277 million, the $75 million haul of another 2009 film, Zombieland, seems like a drop in the bucket.

Still, Zombieland made waves for its clever and very gory spin on the zombie apocalypse genre that didn’t take itself too seriously. It featured an uncommonly good cast: Woody Harrelson, who’d won an Emmy for Cheers in 1987; Abigail Breslin, who’d been nominated for an Oscar for Little Miss Sunshine in 2007; and Jesse Eisenberg and Emma Stone, who’ve racked up multiple Oscar nominations between them in the years since (Eisenberg for The Social Network in 2011; Stone for Birdman in 2015, La La Land in 2017, and The Favourite in 2019).

The movie received mixed reviews, but became the fifth-highest-grossing comedy of the year — no small feat for an R-rated film — and Amazon even shot a pilot of a Zombieland TV show in 2013, though it wasn’t picked up to series. “Double tap” — the movie’s rule for making sure the zombie you just killed was definitely dead — was a catchphrase around my house for a while.

For four years after its release, Zombieland was the highest-grossing zombie-related movie in the US. (World War Z knocked it off its perch in 2013.) And though The Walking Dead premiered in 2010 and quickly became the gold standard for juggernaut zombie entertainment, if you prefer your zombie fare to be more comical than melodramatically gruesome (as I do), Zombieland is still a lot of fun in 2019.

And now watching its new sequel, Zombieland: Double Tap, is a little like escaping back into 2009, in more ways than one. As with most comedies, your mileage may vary wildly. It’s more of a celebration of its own existence than anything terribly fresh, but the jokes are solid and I laughed a lot, which I can’t say for most studio comedies of late. And the aspects that might raise your eyebrow, in a way, only contribute to the blast-from-the-past feel of it all.

Set a few years after the first film, Zombieland: Double Tap brings back director Ruben Fleischer to helm a script by the Deadpool screenwriters. It also reunites all four members of the original cast and adds some new talent (Rosario Dawson, Thomas Middleditch, Luke Wilson, and a superlative Zoey Deutch) for a tale about nothing in particular that’s still pretty entertaining.

The story still revolves around Tallahassee (Harrelson), Wichita (Stone), Columbus (Eisenberg), and Little Rock (Breslin), the unlikely group of strangers who became a de facto family in the first film, post-zombie apocalypse. In the years that have elapsed, they’ve made their way to the White House, cleared out the zombies, put up barricades, and have been living in peace and tranquility among the relics of what once was the presidential home. Little Rock, now nearly out of her teens, has a truly daughterly relationship (complete with eye-rolling) with gruff Tallahassee, and Columbus and Wichita co-exist in domestic bliss, sleeping in the Lincoln Bedroom.

But after Columbus proposes, Wichita gets spooked, and takes off with Little Rock in search of a new place to live. That sets off a series of adventures that almost gets the whole group killed and brings them into contact with other surviving humans, likely for the first time in ages. Everyone’s just looking for a forever home.

The importance of finding a forever home is the only message or moral that Zombieland: Double Tap seeks to impart. I love a good social horror film, but it’s oddly relaxing, in 2019, to watch a zombie film in which the zombies aren’t metaphors for anything at all. The Zombieland franchise isn’t about the Cold War or the Other or how the real zombies are the humans. They’re just zombies, and they exist solely to be dispatched with speed and creative weaponry.

Zombieland: Double Tap’s story is a little vapid. But that’s in line with the first movie’s vibe; besides The Hangover, 2009’s other high performers in comedy included movies like Couples Retreat, Bride Wars, and I Love You, Man, all movies that feel a little dated in retrospect but are still funny enough to watch if you catch them on cable.

Zombieland: Double Tap is self-aware of its existence as a sequel. At the beginning of the film, Eisenberg’s Columbus cheekily acknowledges in voiceover that they know viewers have a lot of choices when it comes to zombie entertainment and thanks us for choosing them, as if we’re sitting on an airplane, waiting to take off. Mid-way through, Tallahassee, Wichita, and Columbus have a good laugh in response to a suggestion from their new companion Madison (Deutch), whom they all consider to be an airhead.

Madison says she always thought a company where strangers with cars could making money by driving around other strangers seemed like a good idea; the rest of the group thinks it sounds like a preposterously good way to get murdered. (In our world, Uber was founded in 2009; in theirs, the world ended in 2009.)

It’s Madison’s existence in the film that feels like the biggest throwback to 2009: A stereotypical squeaky-voiced blonde in a hot pink Juicy Couture terry cloth sweatsuit, she meets Columbus — where else? — in a mall, where she has survived by living in a freezer at a Pinkberry (the once-mighty frozen yogurt chain). Deutch’s infallible comic timing (and the sneaking sense that Madison is way smarter than anyone gives her credit for, no matter her demeanor) means the character isn’t a total waste, but the archetype feels ripped out of an earlier era. The closest recent version is Michelle Williams’s baby-voiced cosmetics heir Avery LeClair in last year’s I Feel Pretty, but Avery ended up having her moment to shine; Madison is pushed to the side and rendered a caricature in every possible way.

Something like that, particularly in less capable hands than Deutch’s, could have sunk the film. But for me it still worked. Zombieland: Double Tap is two hours of occasionally gruesome diversion that didn’t force me to think too hard, with a lot of callbacks to a film, and a time, that I kind of miss. (If you decide to go see it, stick around for a mid-credits sequence that evokes one of the original film’s most famous moments.) It’s not entirely clear why a Zombieland sequel was necessary, but everyone looks like they’re having fun, and sometimes that’s enough.

Rand Paul's neighbor sentenced to 30 days for assaulting the senator
How the 137 million Americans who own stock can force climate action
Sanders and Buttigieg put out preliminary Iowa caucus results showing they both did well
To beat Trump, try running an outsider
Impossible Foods’s new pork is 0% pig. That’s a big deal.
The number of trans state lawmakers nearly doubled Tuesday night