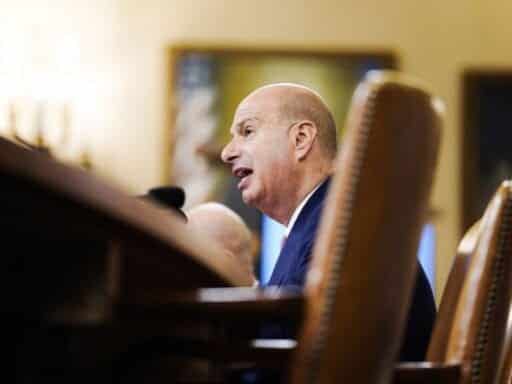 A witness who was supposed to be good for Trump has damned him.

The opening statement from Gordon Sondland, US ambassador to the European Union, is one of the two most damning documents in the Ukraine scandal so far — at the level of the summary of President Donald Trump’s July 25 call with Ukrainian President Volodymyr Zelensky.

Sondland’s testimony, which kicked off Wednesday’s impeachment hearings, lays out a clear timeline of President Trump’s attempts to pressure Ukraine into investigating former Vice President Joe Biden. And it leaves absolutely no doubt as to what was going on.

“I know that members of this Committee have frequently framed these complicated issues in the form of a simple question: Was there a ‘quid pro quo?’” Sondland says. “The answer is yes.”

Sondland’s testimony also makes clear this was not some kind of rogue operation masterminded by Trump’s personal lawyer Rudy Giuliani alone. He provides extensive documentation, including contemporary emails and text messages, showing that his own personal efforts in service of arranging the quid pro pro were authorized at the highest levels of the administration. On this point, Sondland does not mince his words:

This is it. It’s the ballgame. Sondland’s testimony is the whole scandal in a nutshell: It makes clear that the president of the United States masterminded a conspiracy to use US foreign policy as a tool to cement his own hold on power.

Sondland’s story — and why it’s so damning

The timeline of the scandal as described in Sondland’s testimony begins on May 23, three days after President Zelensky’s inauguration. Sondland had attended the inauguration in his official capacity and, on May 23, met with the president to brief him on the new Ukrainian government as US policy.

The meeting, which included other US officials who worked on Ukraine, didn’t go as planned. Sondland and his team were attempting to arrange a meeting between Trump and Zelensky, which the latter badly wanted as a sign of his political strength. But Trump kept trying to force them to work with Rudy.

“President Trump directed us to ‘talk with Rudy.’ We understood that “talk with Rudy” meant talk with Mr. Rudy Giuliani, the President’s personal lawyer,” Sondland said. “We could abandon the efforts to schedule the White House phone call and White House visit between Presidents Trump and Zelensky, which was unquestionably in our foreign policy interest — or we could do as President Trump had directed and ‘talk with Rudy.’ We chose the latter course, not because we liked it, but because it was the only constructive path open to us.”

Here, as in most of his testimony, Sondland presents himself as an innocent victim in all of this — pressured by the Trump administration to do shady things against his will. This is an obviously self-serving account of what happened, and, based on what other witnesses have said, a questionable one when it comes to issues that might implicate him personally in wrongdoing.

For example, Sondland claims that he did not know that the push to investigate Burisma (the Ukrainian gas company Hunter Biden sat on the board of) was really about targeting the Bidens “at the time” he was pushing for it. That’s inconsistent with other testimony. (He does admit that “today I know exactly what it means.”)

But the key issue here is not Sondland’s own culpability. It’s the president’s and the White House’s. And on that front, Sondland is relatively credible — he’s testifying against his own interest, as he’s still the US ambassador to the EU and thus serves at the pleasure of the president. What’s more, some of his testimony here is supported by email and text records.

So after meeting with Trump, Sondland’s testimony goes on to say, he began working with two other high-level US officials — Secretary of Energy Rick Perry and US Ambassador to Ukraine Kurt Volker — on coordinating the Trump-Zelensky meeting and other Ukraine issues. Perry and Volker were in charge of communicating directly with Giuliani, according to Sondland, but it becomes clear through these contacts that Giuliani is communicating the president’s desire for a meeting-for-investigations quid pro quo.

For example, in a July 10 White House meeting on Ukraine policy, Sondland testifies that “I recall mentioning the pre-requisite of investigations before any White House call or meeting.” On July 19, Sondland sends an email to Secretary of State Mike Pompeo, White House acting Chief of Staff Mick Mulvaney, and other high-level officials in the Trump administration documenting his work in arranging a quid pro quo — in exchange of hosting Zelensky at the White House for the investigations Trump wanted:

I Talked to Zelensky just now… He is prepared to receive POTUS’ call. Will assure him that he intends to run a fully transparent investigation and will ‘turn over every stone’. He would greatly appreciate a call prior to Sunday so that he can put out some media about a ‘friendly and productive call’ (no details) prior to Ukraine election on Sunday.

According to Sondland’s records, Mulvaney responded by saying “I asked NSC to set it up for tomorrow.” This is confirmation that the top levels of the administration knew what was going on.

“Everyone was in the loop,” Sondland said. “It was no secret.”

Sondland was not on the July 25 call between Trump and Zelensky, where Trump makes it clear that the investigations he’s demanding target the Bidens. But on July 26, Sondland had a call with Trump that several officials have testified involved a discussion of investigating Biden. Sondland’s testimony does not dispute their memories directly, though he denies saying anything about Biden afterward and hilariously suggests the call was about the rapper A$AP Rocky (who at the time was detained in Sweden):

In early August, Sondland spoke directly with Giuliani which he claims was the first time. He recalls Giuliani specifically singling out investigations into Burisma as well as a conspiracy theory surrounding alleged Ukrainian involvement in the 2016 election centering on a mythical DNC server.

“Mr. Giuliani emphasized that the President wanted a public statement from President Zelensky committing Ukraine to look into corruption issues,” Sondland says. “Mr. Giuliani specifically mentioned the 2016 election (including the DNC server) and Burisma as two topics of importance to the President.”

The Ukrainians were fully aware of this. Volker cites an August 10 text from Andriy Yermak, a high-ranking aide to Zelensky as proof. In that message, Yermak commits to holding a press conference — a key demand of Giuliani and Trump’s — that would announce investigations into “Burisma and election meddling.”

The next day, Sondland informed the State Department of the conversation with Yermak in an email addressed to Pompeo. The email clearly indicates that he was acting pursuant to the president’s desire, saying that the arrangement “will hopefully make the boss happy”:

Mike – Kurt and I negotiated a statement from [Zelensky] to be delivered for our review in a day or two. The contents will hopefully make the boss happy enough to authorize an invitation. Ze plans to have a big presser on the openness subject (including specifics) next week.

“Again,” he testified, “everything was in the loop.”

On August 22, he sent another email to Pompeo saying that they should “ask Zelensky to look him [Trump] in the eye” and inform him that Ukraine is ready to “move forward publicly and with confidence on those issues of importance to Potus and to the US.” Sondland says that this would hopefully “break the logjam.”

The meeting wasn’t the only issue raised in Sondland’s testimony. He also discusses the White House suspension of US aid, which Sondland suggests also became part of the overall quid pro quo.

“By the end of the August, my belief was that if Ukraine did something to demonstrate a serious intention to fight corruption, specifically addressing Burisma and 2016 server, then the hold on military aid would be lifted,” he says.

On September 1, Zelensky met with Vice President Mike Pence. During this meeting, Sondland testifies that he told Yermak — Zelensky’s aide —there was a clear quid pro quo arrangement on aid:

“I told Mr. Yermak that I believed that the resumption of U.S. aid would likely not occur until Ukraine took some kind of action on the public statement that we had been discussing for many weeks,” he says. “I believed that the public statement we had been discussing for weeks was essential to advancing that goal. I really regret that the Ukrainians were placed in that predicament, but I do not regret doing what I could to try to break the logjam and to solve the problem.”

That’s it: There were two quid pro quos in place, one for the meeting and another for the resumption of security aid. Sondland personally conveyed these arrangements to the Ukrainians and has a paper trail linking his work to the president’s behavior.

That’s not to say that Sondland’s testimony is complete. He does not address the full extent of his private conversations with Trump, which testimony from other witnesses suggest make the investigation about Bidens quite early. He says comparatively little about the first week of September, in which the aid was still suspended and pressure on Ukraine was mounting. It’s clear Sondland is still covering for himself and, on some level, he may even be covering for the president.

But what he presents, incomplete as it is, is still damning. The Trump administration engaged in a conspiracy — and left a paper trail. They did it.

The Justice Department has dropped Michael Flynn’s case
RSVP now to talk The Vanishing Half with Brit Bennett and the Vox Book Club
How the 2020 census struggled to overcome Trump to get an accurate count
Will Brett Kavanaugh turn out the Republican base in 2018? Republicans aren’t sure.
Trump’s new trade deal with South Korea, explained
The weekend in impeachment news, explained