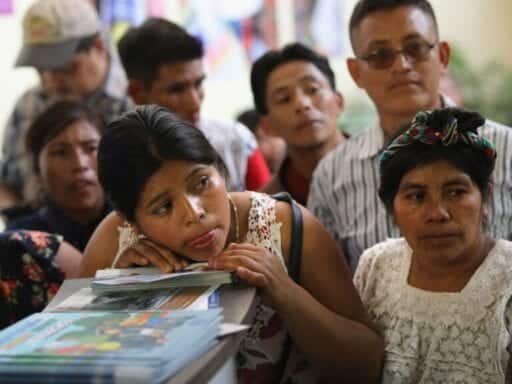 The White House calls this an “unprecedented crisis” — because they can’t be immediately deported.

In September 2018, for only the second time since the government started keeping records, more than half of people caught by Border Patrol agents at the US-Mexico border were parents traveling with their children or children traveling alone.

The Trump administration sees this as a crisis — and as proof that the extra protections in US law for children, families, and asylum-seekers (which the administration refers to as “loopholes”) need to be modified or eliminated to stop people from coming into the US without papers.

The administration is somehow simultaneously on offense and defense on its key issue going into the midterm elections. It’s portraying the specter of masses of people pressing anonymously into the US, and the caravan of some 7,000 Central Americans currently making its way through southern Mexico, as a main reason to vote for Republicans to retain Congress.

But in doing so, it’s promoting the idea that the administration itself is facing a historic failure to keep the US-Mexico border secure — a “crisis unprecedented in our history,” as a senior administration official put it in a press call Tuesday — because of laws designed to keep children out of immigration detention and to allow asylum-seekers to pursue their claims.

Illegal border crossings are still fairly low in context, but who is crossing has changed

It’s not that unprecedented numbers of people are crossing into the US. Overall apprehensions for fiscal year 2018 (which ended in September) were higher than last year, when border crossings fell to abnormally low levels in Donald Trump’s first few months in office. But they’re still, in historical context, extremely low.

The current situation isn’t really about how many people are coming in, but about who they are.

Over the last several years, the composition of people coming into the US without papers has changed.

There are way fewer Mexicans, and substantially more people from the Northern Triangle of Central America (Guatemala, Honduras, and El Salvador). There are fewer single adults — who usually come in seasonal cycles, peaking in March and April. And there are more parents with children — and children on their own.

The flow of children and families into the US isn’t seasonally predictable. It appears to be generated as much as anything by the capacity of smuggling networks to get them out (and partly by information, perhaps false or distorted, about US policy). It’s not as easily deterred simply by throwing more resources at the border. After all, most children and families turn themselves in to Border Patrol agents, generally to present themselves for asylum.

The US has developed a border policy that’s designed to maximize the efficient apprehension and deportation of everyone trying to cross the border illegally and not get caught. But they simply can’t catch and deport children or teenagers arriving alone, because of the 2008 Trafficking Victims Protection Reauthorization Act.

Nor can they catch and deport people who say they have a legitimate fear of persecution. Those people are exercising a right to seek asylum that the US cannot legally deny them under national and international law; they are entitled to a screening interview, and then, if they are deemed credible and pass it, to a full asylum proceeding before a judge.

The Trump administration knows all this. It’s exactly the problem they’ve been trying to fix all year.

After spending 2017 crowing about the record low border apprehensions of Trump’s first few months, Trump and his officials have spent 2018 criticizing the “loopholes” in current law that offer extra procedural protections to asylum-seekers, families, and unaccompanied children, and make it impossible for the government to immediately deport them.

The Department of Justice (under attorney general Jeff Sessions) and Department of Homeland Security have done what they can. They’ve restricted access at ports of entry, so that people trying to present themselves legally at an official border crossing are made to wait days or weeks (and, some observers allege, sometimes simply refused entry entirely). They’ve narrowed asylum eligibility for victims of gang and domestic violence, and made it harder for people who flunk their screening interviews to succeed on appeal.

They’ve also worked to detain as many asylum-seekers as possible (whether they arrive legally without papers, or cross illegally and are apprehended by Border Patrol). They’re proposing regulations that would supersede a 1997 court agreement and allow for the detention of children and families in self-regulated detention centers. For several months, they attempted a “zero tolerance” prosecution policy that led to the separation of thousands of families — most, but not all, of whom have since been reunited.

Nothing they’ve done has stopped the flow of families from continuing to increase, reaching levels only seen before in December 2016.

The administration blames the end of family separation for the rise in families coming into the US from July to September. That doesn’t quite explain why the numbers were flat while widespread family separation is in place from April to June.

There isn’t really evidence that harsher treatment of asylum seekers has a deterrent effect. While the Trump administration is eyeing family separation as something that could stop families from coming if they could only keep it in place for longer, neither the 2017 pilot nor the widespread 2018 policy had the effects that officials hoped for at the border. Neither did Obama’s efforts to expand family detention in fall 2015.

There is some evidence that fewer people come to the US without papers when the asylum-seekers who do come are sent back. Apprehensions dropped in summer 2014 as Mexico took a larger role in apprehending Central Americans, and again in early 2016 after the Obama administration launched ICE raids of families who’d come in 2014 but missed their court dates.

This is ultimately what the Trump administration wants to do: Deport as many people arriving in the US without papers, as quickly as possible.

The administration doesn’t see this as a crackdown on asylum-seekers; it sees it as a crackdown on what it calls “systemic fraud” in the asylum system, “the biggest loophole in the world” (as the senior administration official said Tuesday). The primary evidence of this is the number of asylum seekers who don’t ultimately win their cases, something that there are plenty of explanations for other than fraud.

But the question isn’t really what level of existing fraud there is in the asylum system. Nor is it even whether the administration is willing to reject some people who are fleeing genuine danger in their home countries in the name of making the border more secure. The question, right now, is what more the administration can do, faced with a Congress that quickly loses its appetite for immigration legislation, federal judges watching closely, and a public that draws the line at securing the border by punishing families.

Democratic voters are divided on whether Biden should crack down on Israel
What is the point of dating now?
How the new rules for the Paycheck Protection Program help small business owners
A sexual assault allegation against Joe Biden has ignited a firestorm of controversy
35 years ago today, the US and Soviet Union almost annihilated each other
Why Trump’s acquittal will damage US foreign policy