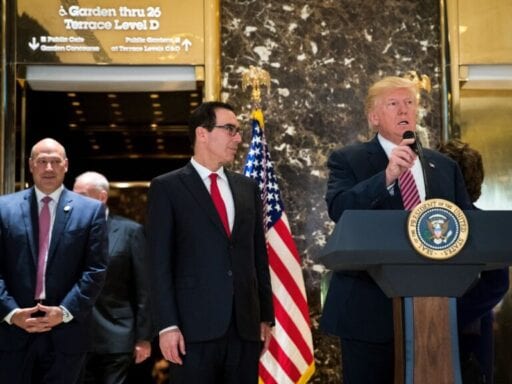 He’s trying to avoid a repeat of his disastrous response to last year’s Charlottesville violence.

President Donald Trump’s equivocal response to racist violence at a gathering of the alt-right and white supremacists in Charlottesville, Virginia in 2017 was one of the low points of his presidency. Ahead of a second Unite the Right rally in Washington, DC this Sunday, Trump appears to want to avoid a repeat — though he is still playing a bit of the “both sides” game.

Without citing Unite the Right by name, Trump on Saturday lamented last year’s “senseless death and division” in Charlottesville. In those clashes, 32-year-old Heather Heyer died after she was struck by a car. “I condemn all types of racism and acts of violence,” Trump said in a tweet. “Peace to ALL Americans!”

Last year, Trump was widely condemned after he insisted that blame for what happened in Charlottesville should be shared by both white supremacists and those who rallied against them on August 11 and 12. White nationalists and neo-Nazis marched and carried tiki torches, purportedly to defend a statue of Confederate Gen. Robert E. Lee from removal, on the evening of the 11. They continued their rallies the following day, and violent clashes ensued.

Trump on August 13, 2017 in New Jersey issued a brief statement saying he condemned “in the strongest possible terms this egregious display of hatred, bigotry and violence on many sides.” The “many sides” comment raised eyebrows, because the president seemed to be making a false equivalency between white supremacists and those who resist them, often groups that have been long oppressed. Despite calls for Trump to condemn neo-Nazis, he refused to do so.

Days later at a press conference in Trump Tower, he tried to amend the comments but again said there were “fine people on both sides” of the rally and counter-rally in Charlottesville.

“What about the alt-left that came charging at, as you say, the alt-right?” Trump said at the time. “Do they have any semblance of guilt?”

During the same press conference, he threw in a plug for Trump Winery in Charlottesville, claiming it’s one of the “largest wineries in the United States.” (It’s not.)

Trump’s reaction was widely condemned as yet another example of his reluctance to denounce white supremacists and the alt-right. On the campaign trail in 2016, Trump refused to disavow former Ku Klux Klan grand wizard David Duke. White nationalists have seen Trump’s rise as a boost to their movement, and as Vox’s Zach Beauchamp notes, studies have shown that Trump’s primary and general election victories were driven by racial resentment and demographic panic he activated among white voters.

Trump’s Saturday tweet, while perhaps an improvement from his reaction to Charlottesville, still has an air of “many sides” to it.

Trump says he condemns “all types of racism and acts of violence” without explicitly calling out the Unite the Right organizers, who plan to rally right outside the White House on Sunday. (Trump won’t be there, he’s in New Jersey.)

Some on Twitter were quick to point out Trump still isn’t entirely there in calling out neo-Nazis and white supremacists.

Translation: “Even though a year has passed, I still can’t bring myself to condemn white nationalists and neo-Nazis who marched in Charlottesville. Because, as I said last year, there is hatred, bigotry and violence on many sides. On many sides.” https://t.co/te7T4SPhob

There’s still time for @realDonaldTrump to put out a better statement. Here’s a suggestion:
“I repudiate white nationalism. The sentiments expressed by the organizers of Sunday’s rally are repulsive. I will re-examine my own deeds and words to ensure I give bigotry no comfort.” https://t.co/NoUUVy7Ahv

Trump’s Saturday tweet is certainly a step in the right direction, but it’s worth noting he has criticized plenty of individuals and groups by name — including NFL players for peacefully protesting during the national anthem and NBA player LeBron James just in the last week alone.

Big Little Lies season 2, episode 2: “Tell-Tale Hearts” asks if families can survive their own secre...
Juul’s CEO is leaving — and being replaced by a tobacco executive
Don’t expect Facebook’s $550 million settlement to stop it from scanning your face
The US has a 2.5 billion-pound surplus of meat. Let’s try to visualize that.
Captain Marvel’s 2 post-credits scenes, explained
After Obama, Democrats need a new theory of change. Pete Buttigieg thinks he’s got it.