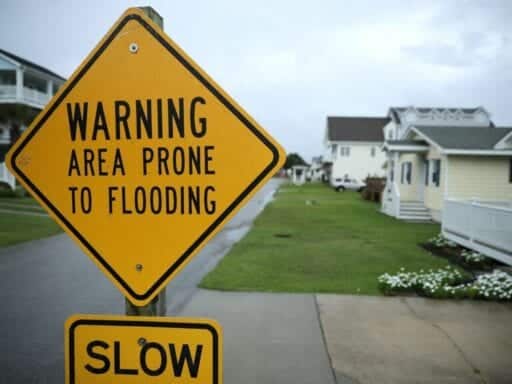 Why this category 2 storm could still be very dangerous.

Hurricane Florence is about a day away from landfall off the coast of North Carolina, and it poses many threats to life and property in the southeastern US. But perhaps the most dangerous threat comes from its storm surge.

The surge, or coastal flooding, tends to be the deadliest aspect of hurricanes. As wind from the storm pushes water onshore several feet above the normal tide, it can trap people in their homes, wash away entire houses, and make rescue missions harrowing and slow.

Look at what happened when a massive storm surge hit the Texas coast from Hurricane Ike a decade ago. It’s not pretty.

An open tweet to coastal residents of the Carolinas:

10 years ago today, we took a hit from category 2 #Ike. Like #Florence, it was a large hurricane with peak winds of 110 mph. These before/after photos show what the 15-20′ storm surge did to our coast.https://t.co/B0byHwOxsO pic.twitter.com/6yEPs1gI0F

The larger the area with tropical storm-force winds, he says, the more potential for those winds to push water onshore, and the greater the impact of storm surge. Plus, the region may see more than 30 inches of rain, which will add to the floodwaters.

“Put simply, Florence is a ‘Category 5 flood threat,’” the Weather Channel reports. Pay no mind to the exact wind speed; floods are coming. And the storm surge could last for four days, or seven or eight high tide cycles (high tide comes about once in every 12 hours.)

The National Hurricane Center has issued storm surge warnings — meaning flooding is imminent — along most of the North Carolina coast and part of the South Carolina coast.

The fact that Florence is expected to move slowly as it approaches landfall means there’s a lot of energy and time for storm surges to accumulate along shorelines, bays, rivers, and inlets. Per the National Hurricane Center’s latest flood predictions for the North Carolina coastline, more than 9 feet of storm surge — imagine a wall of water nearly the height of a basketball hoop — may accumulate in some areas.

“The greatest storm surge inundation is expected between Cape Fear and Cape Hatteras, including the Neuse and Pamlico Rivers and western Pamlico Sound,” the National Hurricane Center warns in its latest forecast. “This is a life-threatening situation.”

Check out an interactive version of the map above via NOAA. You can zoom in on your area of interest to see the storm surge prediction. If you live in these areas, you already know you should be evacuated to higher ground. And you also know it’s never safe to drive through flooded streets.

The stunning new texts, documents, and impeachment evidence released by the House, explained
Fat Bear Week 2019: Holly is the fattest brown bear in Katmai National Park, Alaska
Trump could have reopened health care enrollment for coronavirus. He chose not to.
The future of the vote
Washington primary live results
Opioid addiction is plateauing. But the crisis isn’t over.